“GERMAN” APPLE CAKE and a conundrum. 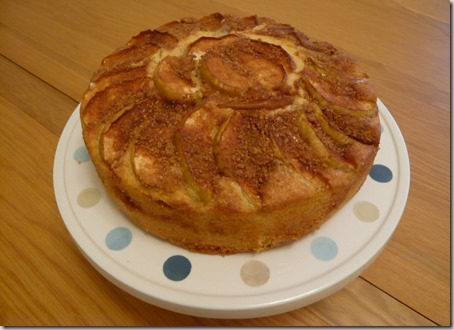 This cake forms another adventure in my quest for the perfect apple cake.  It’s good, in fact very good.  The recipe is one of Rick Stein’s and I saw it in one of his recent TV programmes, in the series “Long Weekends”.  This featured in his weekend in Berlin and as soon as I saw him make it I decided I had to make it too.  I easily found the recipe on the BBC website but Nick then came home from a shopping trip with the book from the series, bless him.  (I suspect he was making up for being unable to do any Christmas shopping.) 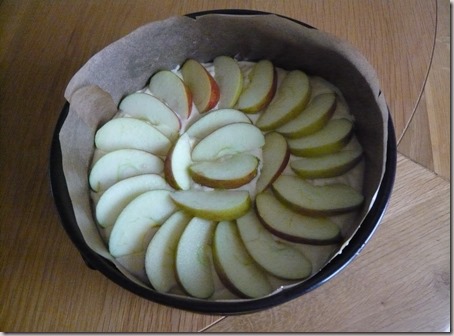 Watching Mr Stein make the cake on the programme I thought he was actually a bit slap dash, not scraping out the bowl completely and not measuring stuff accurately.  It’s the cheffy way I suppose and the end result looked good so who cares?

But…….one of the things that annoys me about cooking programmes is the lack of proper continuity.  In the programme he most definitely did not peel the apples yet in the recipe it says you should.  Looking at the picture that goes with the recipe on the website and the full page one in the book, the apples still have their peel on.  So when I made my cake I didn’t peel the apples either. 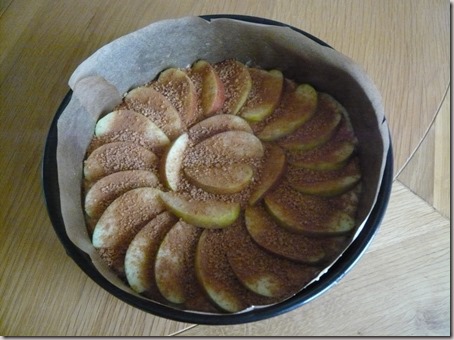 Another thing that didn’t seem right was the size of tin.  In the recipe it says 23cm but watching him make the cake and talk about the tin as being one of his old favourites, I thought it looked smaller than 23cm to me.  I have actually made this cake twice and the first time I used a 23cm tin and I thought the cake was a bit thin.  So this time I used a tin that measures 21cm (probably supposed to be 20cm) and I thought it looked better and more like his.  So there we are.  In any case it’s a very nice cake. 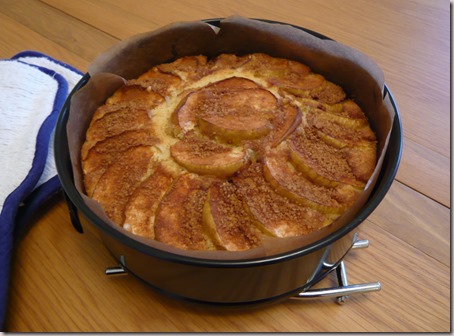 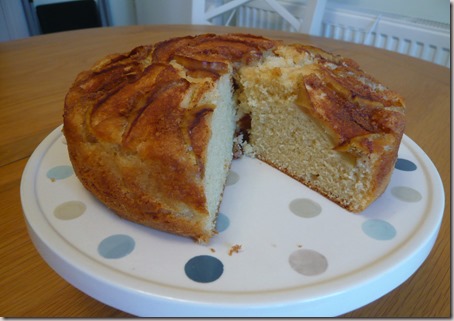 I’m not sure whether a German apple cake should have apple inside the cake as well as on top or not.  Both ways appear in recipes on the internet as well as in my cook books. Rick Stein’s version has apples only on the top and no other added flavour such as spice or vanilla in the cake but it has a lovely, buttery flavour and perfect, even texture.  The spice is in the topping which gives the cake a nice slight crunch.  Definitely a contender for my favourite apple cake recipe so far, I think. 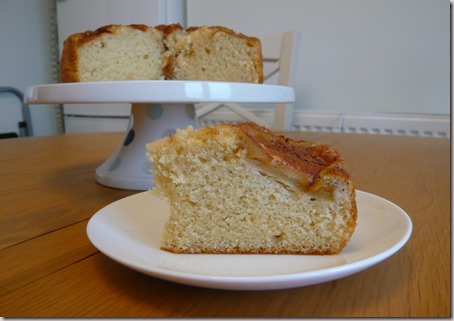 Now for the conundrum. 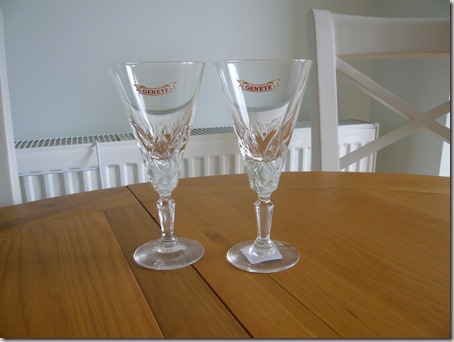 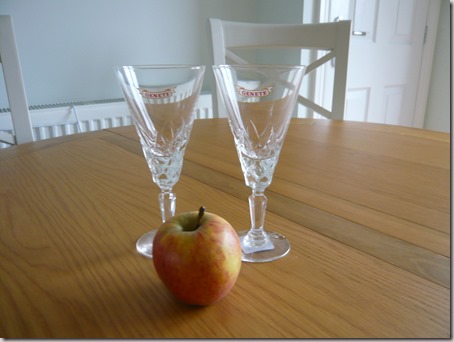 These wineglasses had been for sale in a local charity shop since well before Christmas.  I had looked at them several times but if anything is certain, one thing we do not need is more wine glasses.  In the end I weakened and could resist them no longer. At £2 for four of them it was hardly a big deal, space to keep them is more of a problem.  (I have since seen them for sale on Ebay for ten times that amount so mine were a bargain.)  BUT……what does the logo “GENETE” mean?  It’s presumably some kind of drink and an internet search suggest a mixture of champagne perry and gin but nothing specific.  Also possibly dating back to the 1960’s .

The only champagne perry I have ever heard of is Babycham, which seems, as far as I know, uniquely sold in the UK, especially in the 60’s and 70’s.  Because these glasses have the logo “Genete” on them, I think that suggests a ready made apéritif or cocktail of some kind, rather than one you would mix yourself.   If anyone has ever seen, or even tasted Genete, I would love to hear about it!

Here’s my version of the cake recipe:

Cut the apples into half and remove the core using a melon baller, metal measuring spoon or teaspoon.  Cut each half into about eight thin slices.  Set aside in a bowl and sprinkle with the lemon juice.

In a large bowl, beat together the butter and sugar until light and fluffy.  Add the eggs, about half at a time, beating until smooth.  Sift in the flour, baking powder and salt and fold in carefully until combined.  Add the milk and mix in thoroughly.

Spoon the mixture into the prepared tin and level the top.  Arrange the apple slices overlapping in a circle on top.  In a cup or small bowl, mix together the demerara and cinnamon and sprinkle this evenly over the apples.

Bake for 45-50 minutes until the sponge appears golden brown and springy and passes the skewer test.  Cool in the tin for 15 minutes then remove and cool on a rack.

Serve warm with cream for dessert or cold with a cup of tea (or a nicely chilled glass of sparkling wine, champagne perry or other drink of your choice).