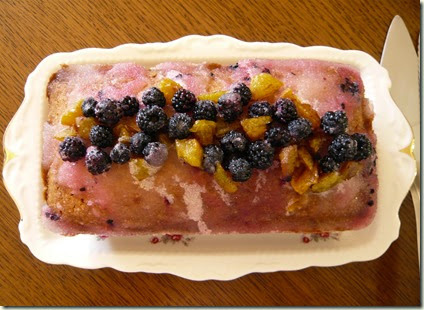 I made this cake using some of those gorgeous little yellow plums called mirabelles that are so common in France but seen so rarely in the UK.  In fact I can’t recall ever seeing them in English shops at all yet in France they fall off trees by the roadside and are just left.  Not long ago we drove along a stretch of road that was a sea of squashed plums in places, which seems such a terrible shame. 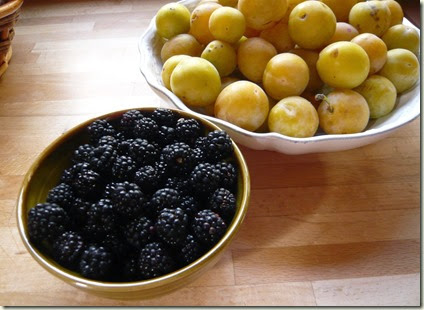 I used a recipe for a cake I first saw on the cover of Good Food Magazine two or three years ago and have been meaning to make ever since.  I did a bit of research and found it on the Good Food website here.

However, backpedalling slightly, before I used my precious mirabelles, I decided to make a “practice” cake with some apricots and plums that were slightly past their best and needed eating up.

The cake is definitely a bit fiddly to make.  You put pieces of fruit on top of the cake mixture then cover it with more mixture and because it’s so stiff, it’s quite difficult to spread the mixture evenly.

You end up with a cake something like the texture of a Madeira cake with a very convenient crack on the top to hold the fruit topping.  Having looked at some of the reviews on the website I decided to reduce the amount of sugar in the drizzle as per many of the comments. 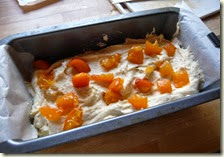 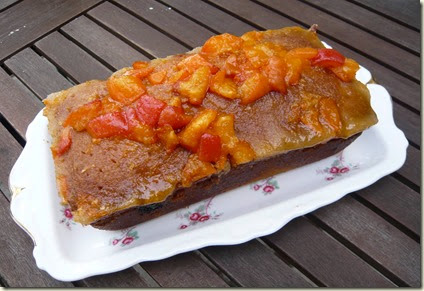 This is one of those cakes I will no doubt make again and again, not because it’s quick and easy, which it isn’t, but because it looks great and is quite delicious.  In fact we had visitors the evening that I made the apricot version and it all disappeared in one sitting!

The sugar content was perfect I thought, but there was a bit too much of a vanilla flavour, so I decided that when I made the cake again I would reduce the amount in the mixture.

Now we come to my plum and blackberry cake, using my precious mirabelles! 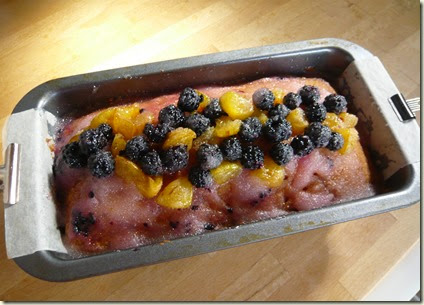 While I was making this cake I decided to catch up with my podcasts of The Archers.  We don’t have a TV or radio in our little French house but we do now have internet so I no longer have to cope with Archers withdrawal symptoms as I can get the programme as a podcast.  I had several episodes to catch up on and got thoroughly engrossed as I baked.  I remembered that I had decided to put half of the vanilla extract in the mixture but……… 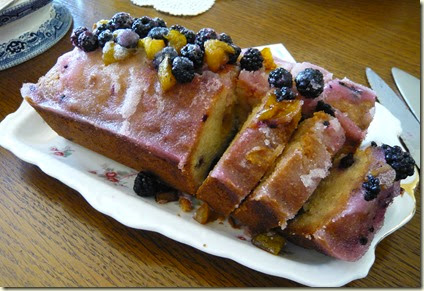 When it came to making the drizzle I got to the part where Elizabeth Archer was having an affair with Roy Tucker and I completely forgot about reducing the sugar as per the previous cake!  So I ended up with a very sugary drizzle which was not as good as on the apricot cake, as predicted by the comments on the Good Food Website.  C’est la vie !!

In actual fact the recipe is rather confusingly written on the website so I have rewritten it in a better order for myself and that’s what I have given below.  Here is my version, with the amendment for the vanilla and drizzle that I think works best.

175g of a mixture of blackberries and stoned, diced plums, or apricots*

Prepare the fruit and divide into two bowls – 100g in one for the cake and 75g in the other for the drizzle.

Butter a 900g/2lb loaf tin and line the bottom with a long strip of baking parchment that runs up and over the short sides.

Put all the cake ingredients into a large bowl and beat with an electric mixer, or by hand, until pale and creamy.  The resulting mixture will be very stiff.

Spread roughly one third of the mixture in the bottom of the tin and scatter roughly 50g of fruit on top.

Dot another third of the cake mixture on top of the fruit and spread out as evenly as you can.

Repeat with the other 50g of fruit and the last third of cake mixture.

Bake for about an hour until the cake is browned and risen and passes the skewer test.

While the cake is baking, make the drizzle by mixing together the granulated sugar, citrus juice and remaining 75g of fruit in a small bowl.

When the cake comes out of the oven, leave in the tin and prick all over with the skewer.  Spoon the drizzle over the cake, and leave to cool in the tin.  As it cools, gently push any runaway fruit back up to the top of the cake, where it most of it will ultimately stay.  The topping will become crisp as it sets.

When cold, remove gently from the tin using the baking paper overhang as handles.

*You can make this cake with various fruits, blackberries, raspberries, strawberries, blueberries, apricots, plums, nectarines and all the currants – and any combination you like.  Fruit should be stoned and diced or chopped to roughly 1cm pieces.