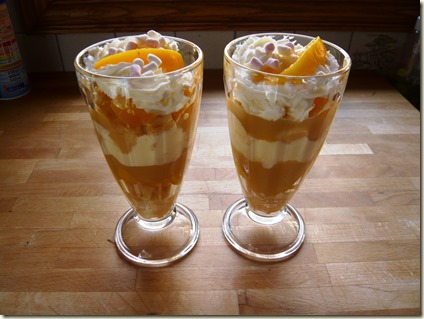 I was stuck for something nice for dessert the other day, didn’t have time to bake anything and there was nothing much in the cupboards, what with being in France at the moment.  We don’t keep the amount of stuff here that we have in the UK and what we hadn’t already run out of had been used up by my brother when he was chez nous with his daughter for a holiday until a few days before we arrived.

However, one of the advantages of having family use the house in our absence is that they leave miscellaneous things behind to make up for the stuff they have used.  Hence I had a huge bag of lime flavoured Doritos and a box of cheese footballs to enjoy when we arrived ourselves !! 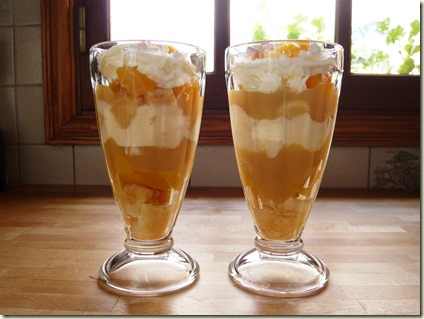 So I had a bit of a rummage and turned up a few boudoir biscuits (leftover from the making of a tiramisu in June), a tin of peach halves that someone else had left here, a jar of apple purée (we stock up and take plenty home with us after every trip), some squirty cream and a carton of apricot yoghurt in the fridge, a little box of mini marshmallows that I swooped on in Sainsburys before we came to France, thinking they might come in handy.

So I took a couple of tall sundae glasses and built something that almost but not quite might be a bit like a knickerbocker glory !!

Break the boudoir biscuits into pieces and drop into the bottom of the glass, moisten with a teaspoon or so of juice from the can of peaches.

Add a layer of chopped peaches, followed by a spoonful of apple purée and a good dollop of yoghurt.

Repeat the layers until the top of the glass is reached.

Chill in the fridge for at least thirty minutes then add a good squirt of cream and decorate with a slice of peach and a sprinkle of mini marshmallows.

Obviously the fruit variations are endless, and I could easily use bits of leftover cake of any kind if I didn’t happen to have made a tiramisu recently !!  In fact imagination is the only limitation when creating a notablocker glory !!

Not only that, but I am actually having the cheek to submit this to this month’s Teatime Treats Challenge !!  The theme this month is chilled desserts, organised by Kate of What Kate Baked in conjunction with Karen of Lavender and Lovage.  You can see the details here.