I make these little tarts every so often and they’re a good way of making something rather tasty from whatever happens to be left over and lurking in the fridge.  I first wrote about them here. 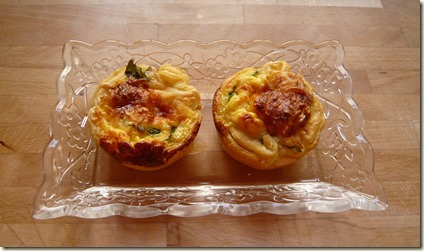 For these I used one leek, a bit of Morteau sausage, some spinach and grated Emmental cheese.

Basically, you cut some ready-made, ready-rolled puff pastry into circles about the right size to line a muffin tin, add some savoury filling in the bottom, pour over an eggy mixture and bake. 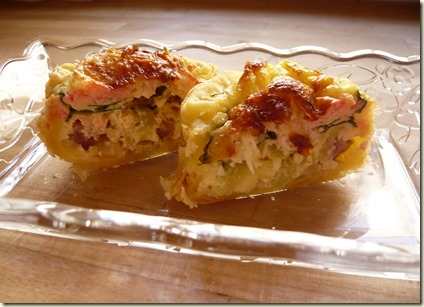 These looked great and would have done very well as a starter for a casual lunch or dinner party. It was the first time I had tried the smoked sausage and leek combination and it worked very well – they were very tasty.  The variations are endless: smoked salmon with asparagus, bacon and broccoli – just use your imagination and whatever you have to hand for the filling.

One with some crudités makes a nice starter.  Two with some salad makes a nice lunch.  One or two with chips and coleslaw makes a very indulgent treat.

2-3 thick slices of saucisse de morteau, or other smoked sausage

a few leaves of spinach

a handful of grated Emmental cheese, or cheddar, Parmesan, or thin slices of Brie or goat’s cheese.

a tablespoon or two of crème fraîche or double cream

Unroll the pastry and cut it into circles big enough to line the holes of a 6-hole muffin tin.  I used an empty jam jar as a template and cut around the top of it for each tart.  Press each piece of pastry into the muffin tin.

Cut the slices of sausage into small dice.   Heat some butter, oil or Flora Cuisine in a small frying pan and add the sausage and leek.  Fry gently until the leek is tender, about 5 minutes.

Divide the sausage and leek between the six tarts.  Rip the spinach into small pieces and add to the tarts.  Sprinkle the cheese over the top or put a thin slice of goat’s cheese or brie on top of each one.

Put the eggs into a measuring jug with the cream or crème fraîche.  Beat together then add enough milk to make up to about ½pint.  Mix together and pour gently into the tarts.  Do not overfill.

Bake for 15-20 minutes, until golden and firm.  Allow to cool slightly before serving.  (The filling will be puffed up when you take the tarts out of the oven but will settle back down on cooling.) 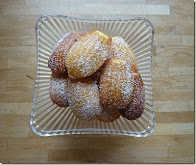