Every November we hold a cake stall at work to raise money for Children in Need.  When we did it for the first time in 2003 we made £130.  We have beaten the previous year’s total every time and in our tenth year we raised over £850.

The same five ladies did the baking and believe me there was an awful lot of cake !!  I made eight cakes myself and some of the others made even more, by baking ahead and freezing, or enlisting the help of family members.  By donating the ingredients I guess it costs each one of us about £40 but that’s our personal contribution to the charity and it generates so much more with a bit of effort.  It’s hard work, but it’s also a lot of fun and brings out the best in people.

I find it incredible that so much money can be made, but it is down to hard work both in the baking and the planning, and the generosity of the people who buy the cakes.

Half of our cake stall.

If you are planning a charity cake stall for any fund raising event, you might be interested to read how we did it.

The first time we did it the cakes were very well received and word spread quickly.  We made the most of this and each year we phone or email local shops and businesses, and our own suppliers, about a week before to remind them that we will be baking again, even taking orders.  On the morning of the day itself we follow this up with another call and this gets people to come and buy.  Generally we charge about £1 for a generous slice of cake or a sausage roll and 70p for a small bun or cake.

We don’t pay for any advertising but make use of the marketing material provided by the charity – posters etc – and display all this about a week ahead, along with lots of balloons and bunting, so that people ask what is going on and often come back on the day for the cake.

Frequently someone will buy a whole cake for a donation of £20-£30.  We have even had people come in and put £10 or £20 in the collecting tin without buying any cake at all, it’s just their way of making a donation, which is heart-warming I think.  We also have a raffle going, asking local businesses for donation of quality prizes, for which we charge £1 a ticket.  Every little helps.

Without a doubt it’s the big, glamorous cakes that sell the quickest.  Nigella’s chocolate Guinness cake, the coffee and walnut cake and the big, decorated chocolate cakes are the best sellers.  So long as the cakes look good they will sell but small cakes, scones and buns are always the last to go at our cake stall.  Sausage rolls and cheese scones sell quite well, also traditional cakes such as date and walnut loaf, carrot cake and lemon drizzle cake.  Anything a bit quirky sells less well so I was really pleased when my pumpkin spice cake sold out last time – it was the first time I had made it and I think it sold because it looked so attractive – an ordinary cake baked in a posh tin !! 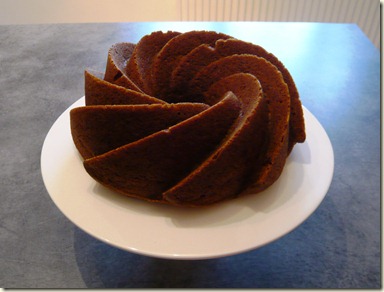 We keep a list of what was on sale each year and make a note of which cakes sold well and which were less popular so that we can make sure we bake the best sellers again next time.

Some people remember the cake stall when the charity begins to be advertised in the media and contact us to make sure we will be doing it again, sometimes making special requests, such as the company that asked – well almost demanded - that we bake a blackberry and apple crumble cake again !!  Home-made cake is such a joy to eat and so much better than shop-bought yet most people still don’t bake themselves that often I think.

We have accumulated a collection of cake stands and plates so that the cakes can be displayed attractively.  Crumbs are tidied up as slices are cut and served, and the table is constantly rearranged to make sure the cakes always look appealing – a lonely slice of delicious cake does not sell if it’s on a plate of crumbs but does if it’s on a cake stand with a few others. 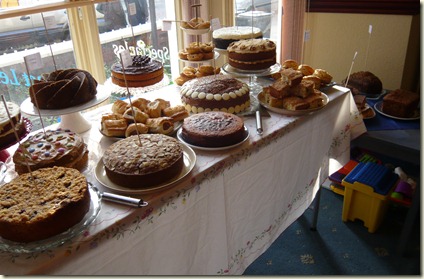 A tidy display of cakes.

Each cake or plate of bakes has a label saying what it is so that customers can see straight away what they are without having to ask.  If they do ask, we can instantly see ourselves what the cakes are without having to find the person who baked it.  If a cake is slightly unusual we put the main ingredients on the back of the label.  Our labels are flags made quite simply from wooden skewers with address labels wrapped round them which we then push into the cakes so that they stand up and can be easily read.

We have a few tables and chairs set up on the premises so that people can enjoy their cake with a cup of tea or coffee.  We charge for the drinks of course, adding to the takings, and have collected nice china (mostly from charity shops) to serve them in. 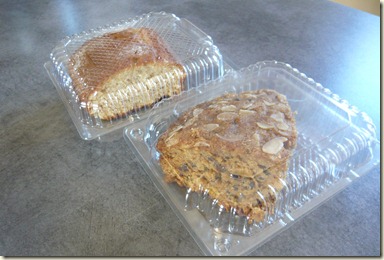 But most people buy a few pieces of cake and take them away to enjoy at home or at work so packing them was a real problem for the first few years.  We experimented with all kinds of bags, paper plates and cling film but we always worried that a beautiful slice of cake might not survive the journey and would be a bashed up lump of crumbs by the time people got it home!

Then one of us had the brilliant idea of asking our local supermarket (Morrison’s) if they would donate some of the cartons they use to sell their own cakes and pastries.  They were happy to help and gave us a whole box with about 350 plastic containers in, just the right size for two of slices of cake or 4 buns.  This made an enormous difference because at last we could sell people a box of cake that looked really nice and would get home in one piece.  All of which helps to encourage people to come back next year. 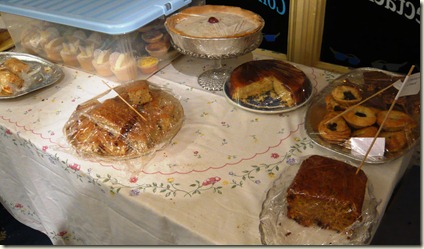 Inevitably there are always some leftovers at the end of the day so last year I put a few boxes of mixed buns and cakes in a nice basket and took it up and down the street at home, the day after the main event so the cakes were still fresh and looked good.  I knocked on doors, presented the basket under people’s noses and asked for a donation of anything at all for a box of cake.  The least people gave was £5!  I sold the whole lot so with just a little more effort I swelled our takings by £35 for what might otherwise have been thrown away.

I think the charity itself makes a difference in that people will give generously for something they think is worthwhile, such as Children in Need, and especially so if they can see the effort that has been put in.

And of course, it’s home-made cake, which most people seem to find irresistible !!

So if you are having a cake stall soon, I hope this might give you a few ideas and  – good luck !!