Taking part in some of the baking challenges organised by other bloggers each month is quite…….a challenge !!  I find myself cooking things I would otherwise never cook and using recipes that I wouldn’t normally give a second look.  Another delight is seeing what other people have cooked for the same challenge, which has given me loads of ideas that I would love to try. 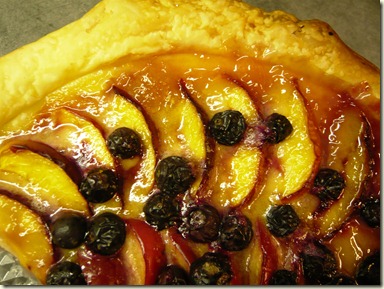 In the round up of last month’s entries for Tea Time Treats challenge, hosted by Kate of What Kate Baked, there was an entry for easy summer fruit tartlets from a blog called Fabulicious Food.  The idea came from a recipe in the book “Nigella Express” and I thought to myself, “I think I might have that book”. 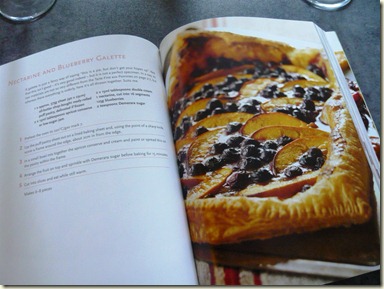 And sure enough, there it was, on the shelf, amongst all my other Nigella Lawson cookbooks, most of which are consulted fairly frequently, and I had completely forgotten about it.  In fact I don’t remember buying it at all and certainly have never cooked anything from it.  I feel slightly guilty about that.  How can anyone have such a good cookbook in their collection and have never used it or even noticed it was there ??

Anyway, I looked at the recipe the little tartlets originated from, called “nectarine and blueberry galette” and decided to have a go.  What a revelation !!  This has to be the quickest and easiest fruit tart I have ever made and it was lovely.  Not the most glamorous or the most elaborate, but dead easy to make and it turned out beautifully in a “rustic chic” kind of way. 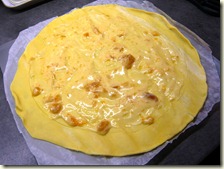 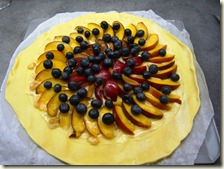 I happened to have some nectarines, plums and blueberries in the house so I made it pretty much as described.

Except that, anyone who buys ready-made and ready-rolled pastry in France will know that it comes in a circle.  The pastry you get in the UK comes in an oblong – or at least it does in my experience.  And in fact, in the January sales I treated myself to an oblong loose-bottomed tart tin which is the exact size to fit the ready-rolled pastry you get here, and it works a treat.  It was such a bargain that I nearly bought a second one to take to France but then I remembered that there was no point because the French pastry comes in circles.  (I could always make my own pastry to fit the oblong tart tin but……..when in France we are on holiday after all !!)

The point of all this is that I used a pack of ready-rolled pastry that we had brought back from France and put in the freezer, so it was a circle.  In any case, you don’t need a tin at all for this recipe, you just unroll the pastry onto a lined baking sheet.  I even used the baking paper that the pastry came rolled up in as the liner for the baking sheet.  How easy is that? 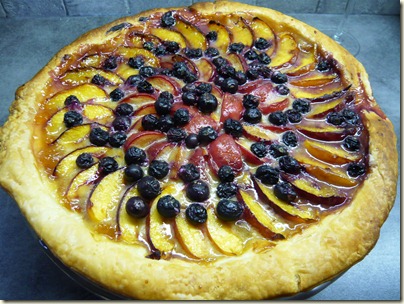 You mix some apricot jam with some double cream, spread it onto the pastry, arrange fairly thin slices of fruit on top, sprinkle some sugar over and bake.  I used two nectarines, three plums and a good handful of blueberries.

It was done in next to no time, the fastest tart I have ever made and it was yummy.  It looked great too.  The possibilities are endless I think, sliced apple and strawberry, apricots and flaked almonds……..lots of combinations spring to mind, including the little tartlets that gave me the inspiration in the first place.

I can’t believe I have never tried anything like this before !!

a good handful of blueberries

Unroll the pastry onto a lined baking sheet.  Using the point of a sharp knife, score a circle (or oblong) about 2cm inside the edge of the pastry to form a border, being careful not to cut all the way through.

In a small bowl, mix the apricot jam and double cream together until evenly combined and spread it over the pastry within the scored circle, using the back of a spoon.

Remove the stone from the nectarines and slice each one thinly into about 16 wedges.  The plums should be sliced into 6-8 wedges so that they are about the same thickness.  Arrange the fruit in concentric circles on the pastry, inside the scored border, or in rows if your tart is oblong.

Scatter the blueberries over the fruit and sprinkle the sugar within the outer border.  This border will rise to form a crust.

Bake for 15 minutes until the pastry is golden brown and the jammy mixture is bubbling slightly.  Serve warm with cream, ice-cream, or whatever you fancy. 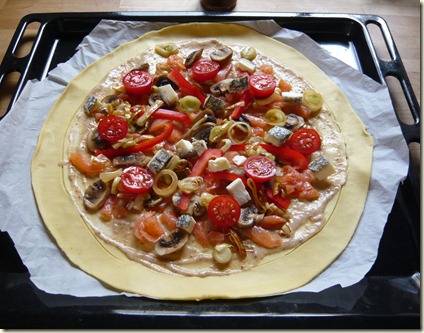 Here’s a savoury version.  I used two tablespoons of confiture d’echalotes (caramelised onion marmalade or chutney in the UK) mixed with two of double cream for the base and piled on smoked salmon pieces, goats cheese, tomatoes, a lightly cooked sliced leek, slices of pepper and mushrooms.  I forgot to photograph it when it was cooked but it was yummy – you will have to use your imagination !!

This is one of those versatile recipes that is so useful I think.