I absolutely love this time of year. September with its hint of autumn but the joy of an Indian summer. October with its beautiful colours and lovely sunshine to cheer us up and bolster us against the chilly evenings. Not long now before we can justify lighting our real fire in the living room and indulge in all that comfort food. 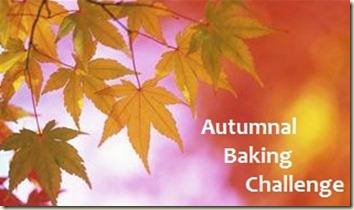 I have always loved autumn ever since I was a little girl. My mother and grandmother would make chutneys and pickles and there would be the Christmas cake and mincemeat to make in good time for the big event. This was long before anyone had a fridge and I don’t think freezers were even invented then.

I can also remember them taking chairs outside and sitting peeling pickling onions in the afternoon sunshine. There would be jars and jars of home-made pickles to enjoy with cold meat on a Sunday teatime throughout the winter. When Kate of What Kate Baked announced her autumn challenge I just knew that it was time to start making chutney !! Of course it’s not exactly baking, but it’s cooking and it’s autumn so I hope it counts !!

Many years ago, I heard a fifty-something Germaine Greer taking part in a TV programme about gardening and she said that middle-aged women take up gardening and making jams and pickles because they have passed their childbearing years but still need to nurture and be productive.

I remember feeling rather miffed that someone who had such radical ideas when she was younger should denounce women of a certain age, almost subscribing to the stereotype after all. Although at the time I was already on the brink of middle age myself I was still full of frantic enthusiasm and energy and the idea of growing anything (other than the occasional houseplant) seemed totally alien. I was sure it would never happen to me.

But here I am, pushing sixty and what am I doing…? Growing vegetables and making jam and chutney. The urge to do it crept up on me and was there before I even realised what was happening. So she was right. 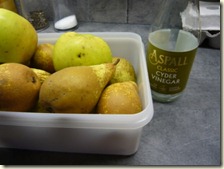 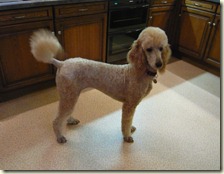 I was delighted when my dad gave me his full crop of pears from his fairly new pear tree and consulted my cookbook for recipes. In it I found an interesting one for pear and walnut chutney.

I already had a stock of fresh walnuts, gathered on our walks with Lulu when we were in France in August. They just fall from the trees around the village and you help yourself. 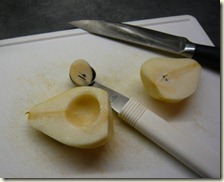 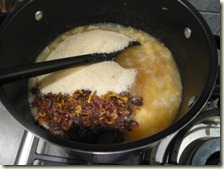 I used a melon-baller to remove the cores from the pears and apples – a tip I read somewhere years ago. 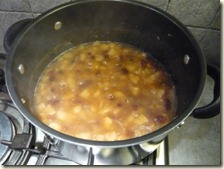 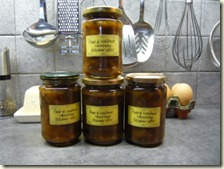 The chutney was simple to make but you have to keep an eye on it, especially in the last stages when it is thickening up and likely to catch on the bottom of the pan. It’s difficult to rescue it if you burn it even slightly.

The chutney should be left to mature for a month before eating. Luckily it made four and a bit jars so the bit was handy just to make sure it was worth keeping. It was delicious !!

finely grated rind and juice of one orange

Put the sultanas in a bowl with the orange juice and leave to soak.

Peel and core the fruit, chop into 1” chunks. Peel and quarter the onions and chop into similar sized chunks. Put the fruit and onions in a preserving pan or large saucepan with the vinegar.

Slowly bring to the boil then reduce the heat and simmer for 40 minutes until the fruit and onions are tender, stirring occasionally.

Add the sugar, sultanas, orange juice and rind to the pan. Cook gently until the sugar has dissolved then simmer for 30-40 minutes or until the chutney is thickened and there is no excess liquid. As it thickens, stir frequently to prevent burning or sticking to the bottom of the pan.

Meanwhile, lightly toast the walnuts by heating gently in a saucepan for about 5 minutes, stirring frequently.

When the chutney is cooked, stir in the walnuts and cinnamon.

Leave for one month before using and keep in a cool dark place. Keeps for about a year.