Dom at Belleau Kitchen has another Random Recipe Challenge for the month of June and this time it is to cook something from the most recent cookbook received as a gift.

The “rules” of the challenge are that you open the book at random and cook whatever is on the page where it falls open. 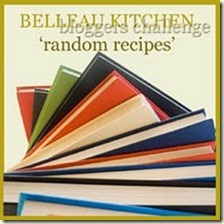 I have acquired a few cookbooks this year but most of them were gifts from me to myself so I didn’t think that would count.  So I had to look at the gifts I received at Christmas.

My work colleagues gave me the Hairy Bikers “12 Days of Christmas” cookbook but I really didn’t fancy cooking anything vaguely Christmassy in the middle of June so I put it back on the shelf.

Nick gave me the “River Cottage Everyday” cookbook, which is wonderful, but every time I let it fall open it was at a page of typical HFW ramblings, not of an actual recipe, which I took as a bit of a hint not to use that book.

So that left just one book, the third I received at Christmas and which was given to me by my niece Joanna. 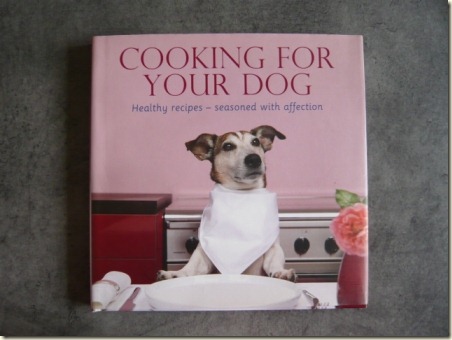 When I opened it on Christmas Day I thought it was a joke book but in fact it is absolutely serious.  We already cook most of  Lulu’s food for her because we think she is allergic to the colouring in some dog foods.  Every so often her skin erupts into huge and itchy bumps (which drive us all mad with her scratching) but it has been much improved since we took control of her diet.  This book has given us some good ideas on expanding our canine-cuisine repertoire !!

When I flipped the pages it fell open at “Honey Dog Biscuits” – perfect !! 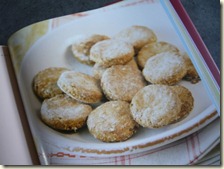 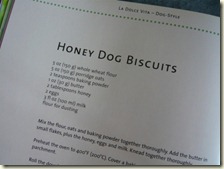 The ingredients are simple and wholesome and you just combine them all without any fuss and roll out the biscuit dough.  I found the dough very sticky so added about a tablespoon more of the  wholemeal flour to be able to roll it out. 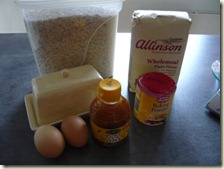 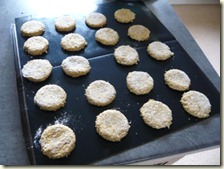 You cut them into small dog-sized rounds (depending, I suppose, on your size of dog). I used the smallest cutter I had in my set, which was just under 2 inches.   You bake them and then leave them in the oven to dry out. 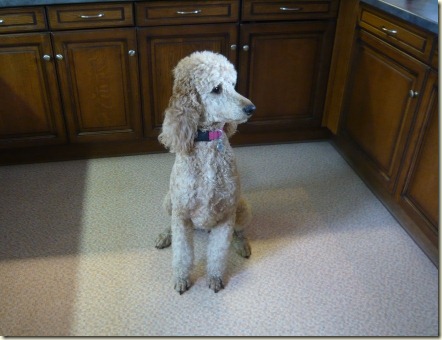 Lulu was very keen to give her opinion on the biscuits as soon as they were cool enough !! 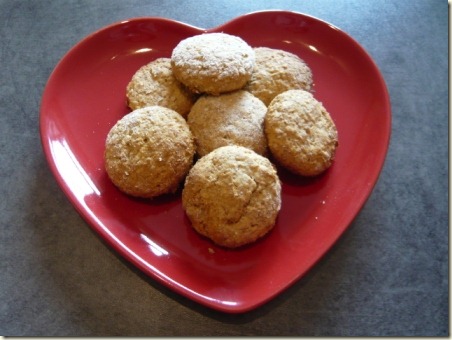 Once they had cooled a bit, Lulu and I  both tried one !!  They were very tasty, with just a slight sweetness.  The flavour reminded me of the oat biscuits you often get in packs of mixed cheese biscuits and I thought they would go well with a nice piece of Stilton or Wensleydale.  In fact if you rolled them a bit thinner and cut them slightly larger, they would be perfect for that.

In a large bowl, mix the flour, oats and baking powder together thoroughly.

Add the butter in very small pieces then add all the other ingredients.

Roll out the dough to about 1cm thick on a floured surface.  Cut out round shapes and place on the baking sheets with a little space between each one.  (I found the biscuits only expanded slightly).

Bake for 15-20 minutes until golden brown.  Turn off the heat and leave in the oven for 2 hours to allow the biscuits to dry out.