KEEP YOUR EYE ON THE BALL 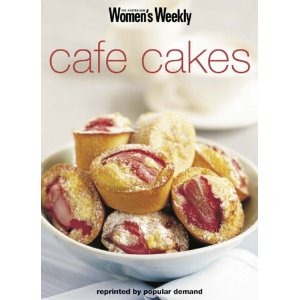 I have had this book for a few years and have often fancied making the almond and strawberry friands on the front cover – they look really sophisticated, I think. 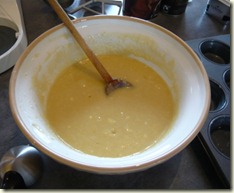 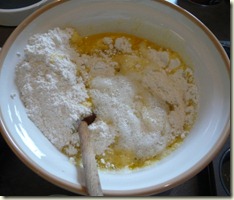 They contain a lot of egg whites, ground almonds, a small amount of flour and something called “icing sugar mixture”.  I looked this up and apparently it is icing sugar with 3% cornflour added as an anticaking agent.  When I inspected the small print on a packet of regular icing sugar I saw that it had some other anticaking agent added so I just used ordinary icing sugar.

That’s the thing about baking these days.  Recipes come from different continents and often the ingredients are unavailable or you have to do some research.  Google to the rescue.

They are very simple to make.  You simply mix all the ingredients together briefly as if making muffins.  This produces a very glurpy mixture which you pour into the tin and then scatter the fruit on top. 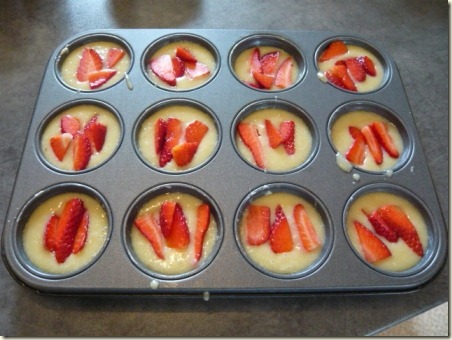 I didn’t have a friand tin, which produces slightly oval cakes, so I used a muffin tin.  I was a bit nervous about not using muffin cases, convinced that they would stick horribly to the tin and look a mess when I tried to turn them out. 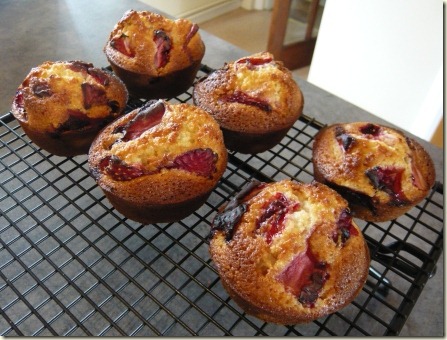 Then – disaster.  The recipe book suggested a moderately hot oven, which was listed in the glossary as being 200-210º C.  This seemed rather hot but having not made them before I decided to give it a go, making the usual adjustment for a fan oven and keeping my eye on them as they cooked.  Then something distracted me and I took my eye off them for 5 minutes and they were overdone.  Damn.  This was such a shame because they looked so pretty before they went in the oven !! 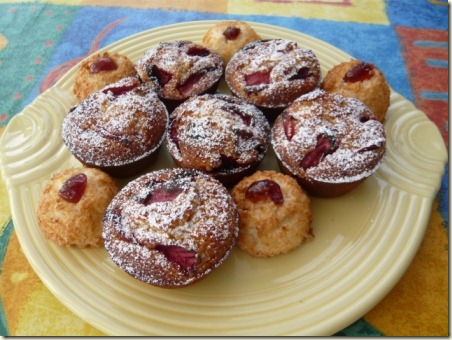 But, they came out of the tin perfectly.  Six out of the twelve looked fine so I dusted them with icing sugar and served them as planned.  The six that were slightly too dark made a very nice dessert, warmed in the microwave and served with some warm cooked strawberries and custard.

Apparently they are popular in Australia – the recipe was in an Australian Women’s Weekly cookbook – but originated in France as something called “financiers”.  They had a lovely grainy texture and almondy taste.  I will definitely make them again but cook them at a lower temperature and keep my eye on them properly.

Here’s the recipe for ALMOND AND STRAWBERRY FRIANDS

Preheat the oven to “moderately hot”.

Melt the butter and allow to cool slightly.

Grease a 12-hole friand tin or muffin tin and stand it on an oven tray.

In a large bowl, mix together all the ingredients except for the strawberries until just combined.

Divide the mixture evenly among the prepared friand tin and arrange the strawberry slices on top.

Bake for 20-25 minutes until risen and golden.

Cool in the tin for 5 minutes then turn out onto a wire rack.