The upshot of this is that we have our weekends to ourselves and now see Sundays as a day when we can, if we fancy, cook something out of the ordinary or even rather exotic, things that we wouldn’t have cooked previously in case my dad didn’t like it. 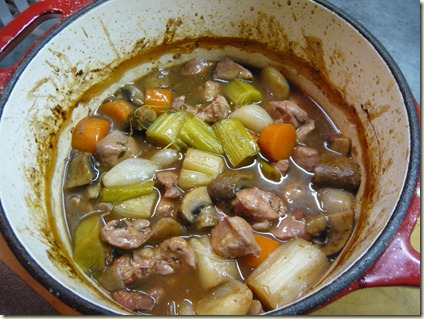 When we were in the supermarket on Saturday we looked at the game birds and other tasty meats and picked up a pack of venison.  Not that there is anything extraordinarily exotic about venison but I’m pretty sure it would not have been my dad’s choice.  Whenever we asked him what he fancied for his dinner at the weekend he usually said “chicken” and his other favourites were lamb or gammon.

In fact I’m pretty sure that when he goes to lunch with his lady friend on Sundays he probably has gammon with egg on top – not pineapple as that’s far too exotic !! 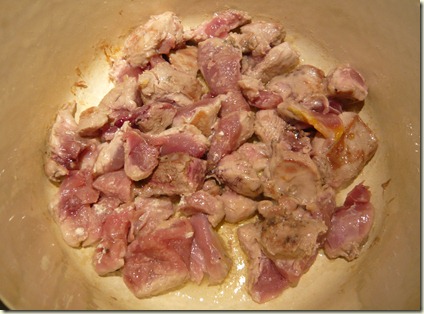 Anyway, when we got the pack of venison out of the fridge to cook it, it turned out to be pack of “British game casserole mix”.  Obviously, although we had spent ages carefully weighing up what we would like to cook we picked up the wrong pack when we put it in our basket.  Hmmmmm.

It was a 340g pack of mixed venison, pheasant, pigeon, partridge and duck.  With the occasional lead shot, all for £4. 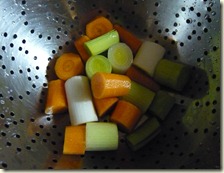 To it we added a few chopped chestnut mushrooms, two shallots, two small carrots, a leek and a small pack of lardons.  We casseroled it in chicken stock and for extra oomph added some sprigs of thyme and a good splash of port.

It was delicious.  It would easily have fed three people, being fairly rich and would stretch to four with extra veg on the side.  We served ours with some broccoli, green cabbage and celeriac & sweet potato mash. 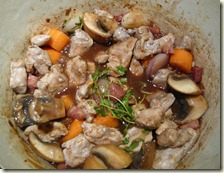 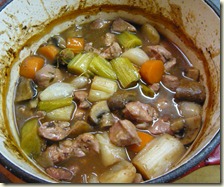 It’s definitely something we will be making again.

1-2 leeks, depending on size, washed and thickly sliced

a small glass of port

2-3tsp cornflour or plain flour for thickening if needed

In a medium hob-proof casserole dish or frying pan, heat a couple of tablespoons of oil.  Add the casserole mix pieces and the lardons and brown.  Remove from the pan and set aside.  Add the shallots and mushrooms to the pan and brown.

Remove from the heat.  Add the other vegetables, stock, thyme, and port to the casserole dish (transfer to a suitable casserole dish if you have used a frying pan), return the meat, stir and season with salt and pepper.

Cover and cook in the oven for about 1¼ hours or until the meat and vegetables are tender.  (Add a little plain flour or cornflour mixed with water and return to the oven half way through the cooking time to thicken if you like.)  Serve with mashed root veg and greens.