TOAD IN THE HOLE 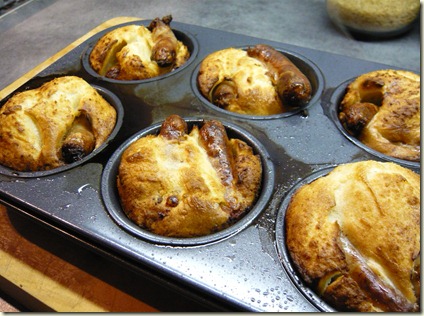 My mum used to make toad in the hole and it was a real favourite with our family.  A huge roasting tin brim full of crisp and fluffy Yorkshire pudding blanketing  a whole pound of sausages, served up with mashed potatoes and greens…..heaven on  a plate.  It’s the ultimate comfort food I think.

My Yorkshire puddings have never quite lived up to the standard of my mum’s so my toad in the hole was usually rather hit and miss if I made it in a large tray.  I have had much more success since I started making mini ones using a muffin tray. 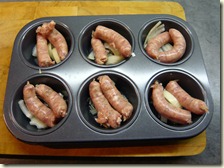 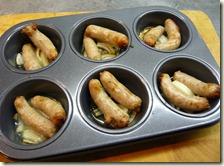 The recipe I use is from an old Weight Watchers cookbook.  It’s very similar to an ordinary recipe for toad in the hole except that it uses much less fat, low fat sausages and some onion.

Personally I have never really got the point of low fat sausages.  I am inclined to think that if you’re trying to lose weight you should probably give up sausages altogether rather than eat the low fat poor relations.  So I make my toads with real sausages, which obviously makes a nonsense of their points value but they taste really good !! 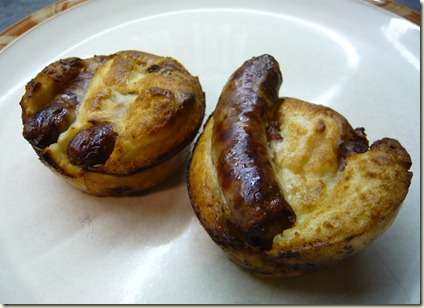 Do they look even vaguely like toads to you ??!!

I have also never quite understood why it should be called toad in the hole.  To me the sausages look nothing like a toad sticking its head out of a hole – something I would certainly never be tempted to take a bite of, but that’s the official origin, allegedly.

I usually make half quantities of the batter for two or three of us, serving three or two toads each accordingly.  Serve with a good pile of mashed potatoes, green veg and onion gravy.

Divide the oil between the holes of a 12-hole muffin tray.  Put in the oven to heat up for 2 minutes.

Cut the sausages in half.  Put some slices of onion and two halves of sausage in each muffin hole.  Return to the oven for 8 minutes and the sausages should then be lightly browned.

Make the batter while the sausages are in the oven.  Sift the flour into a bowl and season with salt and pepper.  Make a well in the middle and break in the egg.  Gradually add the milk and whisk until you have a smooth batter.

Pour the batter over the sausages, dividing equally between them.  Return to the oven and bake for 18-20 minutes, until the batter is risen, crisp and golden.