When we were on holiday in France in August, I invited my two young friends, Isabella and Amélie, round for a baking session.  We baked a whole load of stuff and these lemon curd macaroons were among the favourites. 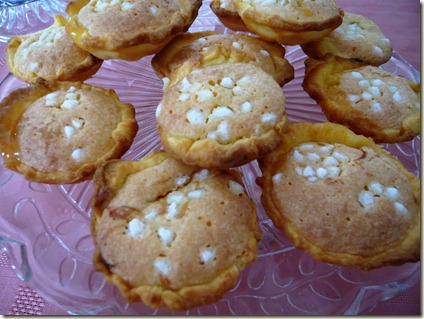 The tarts are based on the old Be-ro book recipe that I used to make nearly every week with my mother when I was a little girl.  This is how I learned to make pastry with my mum, rubbing the lard into the flour by hand and rolling the pastry out – my mother always used lard, not butter or margarine, in her pastry and it was always delicious.  Maybe it’s what you get used to.

You can find the Be-ro recipe on their website here, in the pastry section. 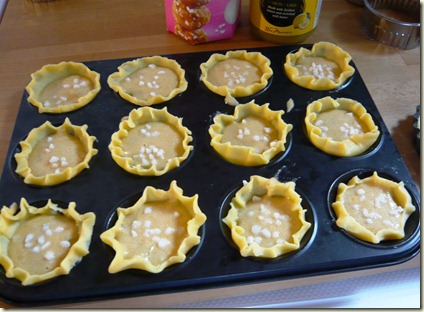 However, in France I used a pack of ready-made, ready-rolled shortcrust pastry, the sweet version called paté sablée, which you can get in all the supermarkets.  Amélie cut the circles of pastry and I showed her how to crimp the edges by hand.  She’s a very smart little girl and was keen to do a good job. 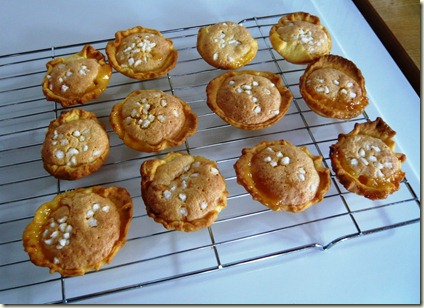 My mum always made the tarts with Robertson’s strawberry jam, the one where you could send off for a golliwog using a coupon from the label on the jar.  This was in the 1950’s, when it never occurred to most of us that such a thing could be offensive to anyone.  I had quite a collection of the golliwogs – I wonder what happened to them.

I decided to make the tarts using lemon curd and some lemon rind in the almond filling.  We also sprinkled some Perles de Sucre, crushed sugar cubes, on top for decoration. 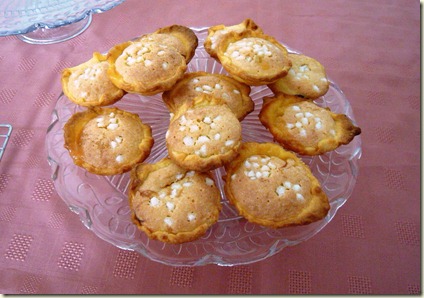 The tarts were a big hit with everyone and soon disappeared off the plate. 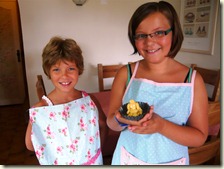 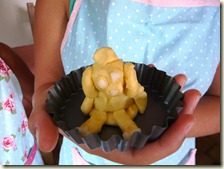 Isabella was creative with the pastry trimmings.  I told her that we usually make them into biscuits for Lulu so she decided to make them into a miniature Lulu.  Being a dog, Lulu scoffed it in one go, but I’m sure she appreciated the aesthetics really !!

This month’s Tea Time Treats Challenge, proposed by the lovely Kate of What Kate Baked, and Karen of Lavender and Lovage, is for preserves.  Lemon curd is a kind of preserve, in the sense that it comes in a jar and you use it for tarts, hence I am entering our lemon curd macaroons.

Here’s how we made them:

grated rind of ½ a lemon

Mix the almonds, sugar, lemon rind and egg together.

Put about half a teaspoon of lemon curd in to each tart.  Drop a spoonful of almond mixture on top of each one, dividing it equally between the tarts.

Sprinkle a few perles de sucre on each tart.

Bake for 15 minutes or until risen and golden brown.  Cool in the tin for a few minutes then remove and cool completely on a wire rack.

(You could also dust with icing sugar or drizzle a little lemon water icing on top and sprinkle with yellow sugar crystals if you like.)

This has become a favourite recipe in our house for a quick, delicious and satisfying meal.  The whole thing is on the table in less than an hour, making it an ideal midweek dinner,  and it also looks good enough to serve to guests too.

It is based on a recipe from the book “Easy Meals” by Rachel Allen and you will find the original version on her website here. 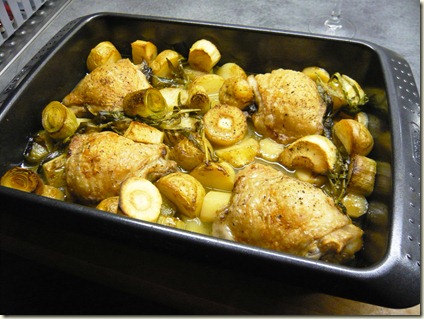 I tend to vary how I make it, depending on how big the chicken thighs are and how many people I expect to feed.  Four small thighs and a few veg will feed two nicely.  Good plump thighs and a few more veg in the pot will feed four easily.  Thickly sliced parsnips work well instead of potatoes, as do courgettes. 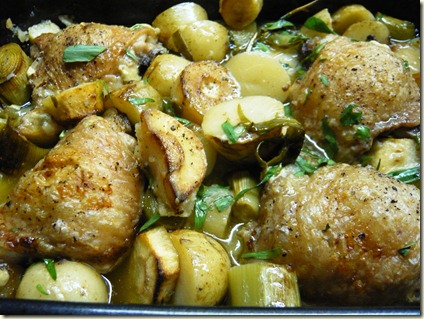 You can also make a gluten free version, replacing the chicken stock with dry white wine, which works really well and is just as delicious.

Here’s my version of the recipe:

a handful of unpeeled small new potatoes, or larger ones cut in half

the juice of one lemon

Preheat the oven to 220°C/200°fan/gas mk 7.  Heat a couple of tablespoons of olive oil in a large frying pan or ovenproof baking pan (such as a cast iron one).

Cut off and discard the flappy bits of skin from the chicken thighs.  Season with salt and pepper and place them skin side down in the hot oil.  Cook for 4-5 minutes until nicely browned.

Turn them over and add the leeks and potatoes.  Cook for another 2-3 minutes.

Add the stock and a sprig of tarragon (or a good sprinkling of dried tarragon).

If you have used a cast iron or similar pan this can then go straight in the oven, or if you have used a frying pan, transfer to an ovenproof dish or casserole, making sure the chicken stays skin side up.

Cook uncovered for about 30 minutes until the potatoes are soft and the chicken is cooked.  Stir in another sprinkling of tarragon, the lemon juice and mustard before serving.

When we are on holiday in France the generosity of our friends and neighbours never ceases to amaze and delight us.  After five years of having our holiday home you would think it should no longer surprise us, but it always does, and it’s such a complete joy.

Our friends will bring us the surplus from their vegetable gardens when they come to visit, we come away from their homes with armfuls of fruit and veg, and our neighbour just leaves little parcels of it on the doorstep for us to find.  This holiday has been no exception and although gardening has been challenging in France this year, just like it has at home, our friends have still been kind to us and passed on some of their goodies. 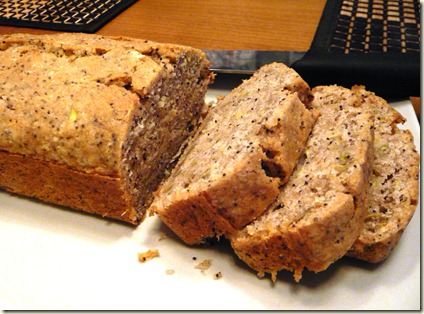 So, with a basketful of beautiful tomatoes and squash in our cellar, I was looking through my folder of recipes for something to make with courgettes and came across a recipe for courgette and lemon cake.  I first saw the recipe on my friend Diane’s blog, so printed it out from the website – you can see the original here.

However, I was rummaging through the cupboards in my little French kitchen to see whether I had all of the ingredients and found this part used packet of poppy seeds lurking at the back: 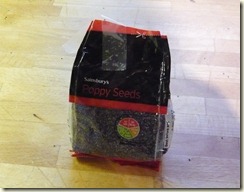 Which reminded me of this month’s Random Recipe Challenge, “store cupboard finds” – the brainchild of the lovely Dom at Bellau Kitchen, which was to cook with some long forgotten ingredient found at the back of the cupboard. 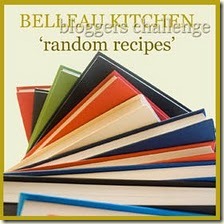 I had actually already done this rummaging exercise in my English kitchen before we came on holiday and brought some ancient tins of foodstuffs on holiday with me, knowing I would have more time to do something with them on holiday than at home.  But somehow I never got around to using them.  No doubt they will be returned to the back of the same cupboard, having crossed the English Channel in both directions !!  But I certainly did not want to waste my lovely round courgette so I walked down the hill from our little cottage to the Thursday morning market in the village to buy a lemon.  Poppy seeds often appear teamed with lemons in a cake so I thought I would add some to this recipe and see what happened. 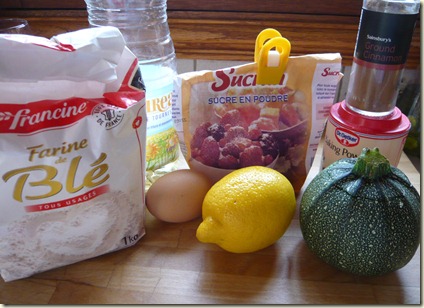 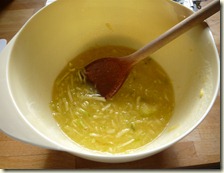 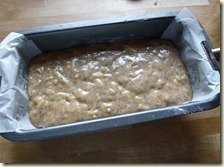 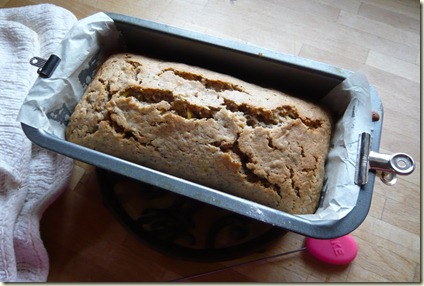 The cake was really easy to make, the flavour of the lemon and cinnamon were lovely and it was not too sweet.  The courgettes made it nice and moist and the poppy seeds made the texture more interesting.  It was not the most glamorous looking cake I have ever made but I will definitely be making it again.  It’s a great way to use up a glut of courgettes too.

Here’s my version of the recipe:

the finely grated zest of one lemon

Preheat the oven to 160°C/150°fan/gas mk 3.  Grease a small loaf tin and line with a strip of baking paper that goes along the bottom and up both sides (this helps you to lift the cake out when it is cooked).  If you are using a fan oven it may help to fix the paper to the ends of the tin with paper clips or bulldog clips, to stop it wafting onto the top of the cake.

In a large bowl, beat the courgette, sugar, egg and oil together.

Sift in the flour, salt, bicarb and baking powder.  Add the lemon zest, poppy seeds and cinnamon.  Stir together until just combined.  Pour the mixture into the tin.

Bake for 45-50 minutes until firm and golden and the cake passes the skewer test.  Cool in the tin for ten minutes then remove and place on a wire rack to cool completely.

When cold cut into thick slices.