RIESLING WINE CAKE, and the strange case of “whose recipe is it anyway?”

A few of you who have been reading this blog for a while might remember the episode a couple of years ago when I, along with many others, was ticked off by Dan Lepard’s editor/business manager/civil partner, David Whitehouse, for writing up one of his recipes on my blog.  Since then I have paid special attention to saying where recipes come from and in any case I only ever use my own photos,  but my copy of “Short and Sweet” remains unopened and gathering dust on the bottom shelf, as if jinxed.

You will see the reason for revisiting this sorry episode when you read on............ 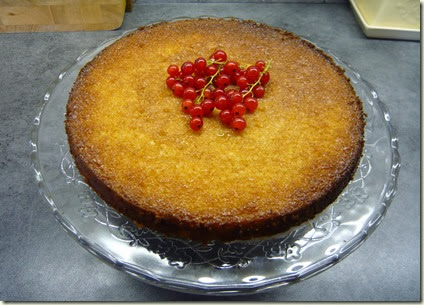 I became a member of the Clandestine Cake Club this year (it was bound to happen) and in August I was at last able to get to one of their local meetings.  I volunteered Nick to come with me as my guest.  For those who don’t know (there might be a few!) the CCC is a UK club with branches up and down the country and the idea is that you bake a cake, take it to the meeting, introduce it, eat it, eat everybody else’s cake and, having eaten more cake than you could ever have imagined, you take away slices of all the cakes at the meeting.  Marvellous !! 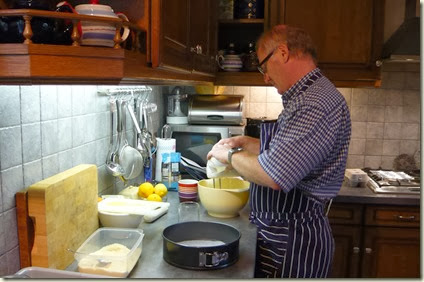 Anyway, Nick decided he would also like to make a cake to take to the meeting.  The theme was “sweet and savoury” so I made a savoury cake to a Rachel Khoo recipe, which was very nice, but I wouldn’t make it again.  Nick hunted for a recipe he would like to do and found one for Riesling Wine Cake in the Hairy Bikers Baking book that I had borrowed from the library.  This is the book that went with their Bakeation series on TV. 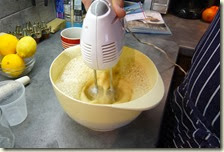 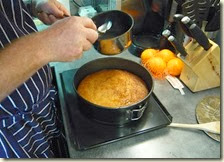 There were lots of beautiful cakes at the meeting and whilst mine was said to be very nice, his got plenty of attention and even a special mention in the write-up after the event.  Harrumph. 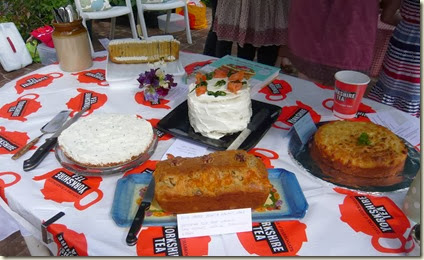 The savoury cakes at the CCC meeting, with mine at the front.

With the next CCC meeting coming up I decided it was time to blog about the last one and looked for the Riesling cake recipe on the web, only to find no mention of it at all in any association with the Hairy Bikers.  However, I did find it here where it is credited to another TV chef, Simon Rimmer.  In fact it appears in the Hairy Bikers’ book word for word exactly the same as you see it credited to Simon Rimmer on this website, even the photograph is the same.  Now there’s a thing. 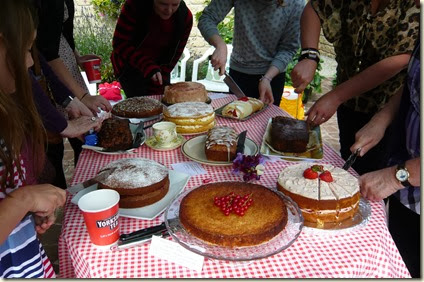 The sweet cakes, with Nick’s at the front.

To be fair, in the introduction to the cake in their book, the Hairies don’t say they made the cake, they say they ate it in Germany and “loved it so much” they had to find out how to make it.  Obviously they did but are not giving any clue where the recipe came from.

So, what is that all about then?  Is the recipe really Mr Rimmer’s and does he know they put it in their book?

Maybe the Hairies paid Mr Rimmer handsomely for the privilege of using the recipe, or bought him a pint.  Or maybe it was the other way round, because curiously, the photo on the website looks like it was taken by the same person who took all the photos in the Hairies’ book.  The plot thickens, we will probably never know what the answer is and …. how much does it matter in any case?

Anyway, I have to give credit to Nick, it was a stunningly good cake and looked the business topped with a few redcurrants from our garden.  It’s a very sophisticated cake.  You can taste the wine, the orange and the cardamom, and it’s gluten free.  He has made it again since but omitted the syrup that you pour on the top, which was better we think.  The syrup makes it extremely moist and boozy but we actually liked it better without it.

Nick is now a full member of our local branch of CCC.

The link I gave for the recipe on the web here has disappeared, as they do, so I have written the recipe below.

For the wine syrup (omit if you prefer)

In a mortar and pestle, bash the cardamom pods until split.  Tip them out onto a plate, pick out the seeds and put them back in the mortar, discarding the pods.  Grind the seeds to a powder.

In a large bowl, beat the eggs and sugar until lighter and creamy.  Add the citrus zests and cardamom and beat until combined.  Whisk in the oil and wine until smooth and thick.

Mix the baking powder with the ground almonds then fold into the batter.  Pour into the prepared tin.

Bake for 25-30 minutes until well risen and golden.  Cool in the tin for 15 minutes before removing from the tin*.

*If using the syrup (optional) leave the cake in the tin, put the wine and sugar into a small saucepan, bring slowly to the boil, stirring all the time.  Simmer for 5 minutes.

Pour the syrup over the cake while still warm and in its tin, a little at a time so that it soaks in.  If the syrup pools on the top of the cake prick the surface with a skewer.  Leave to cool completely in the tin.

Serve decorated with a few redcurrants or raspberries, a dusting of icing sugar and a little cream or crème fraîche if you like.