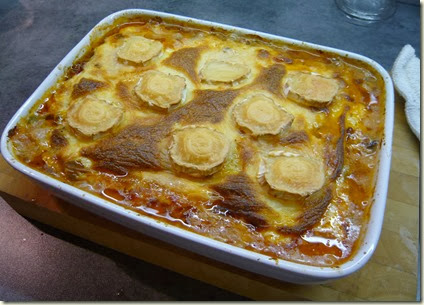 A marrow is really just an overgrown courgette.  My father grew them in the greenhouse when I was a child, as did most of my uncles, and the neighbours.  A single marrow goes an awfully long way in terms of culinary use so using them up was a bit of a challenge.  (Giving them away was not an option as everybody in the village had more than enough already.)

My mum had three principal uses for a marrow; stuffed with sage and onion stuffing then baked and served with chops or sausages, in homemade chutney or, the family favourite, stuffed with a meaty filling, smothered in cheese sauce and baked. 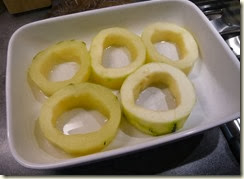 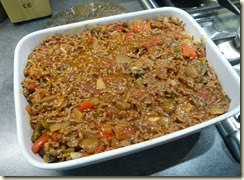 Once my brother and I had flown the next, using up the marrows was more of a challenge for my mother and in autumn every visit I would come away with half a marrow whether I wanted it or not.  Which I did, of course.

My dad no longer grows anything at all so I had completely forgotten about stuffed marrow until I found myself looking at a modest sized specimen in the supermarket the other day.

To make stuffed marrow you don’t so much need a recipe as a guide to the concept.  Think beef lasagne, bolognaise and a large green vegetable and there you have it.  It’s almost a cross between a lasagne and a cauliflower cheese. 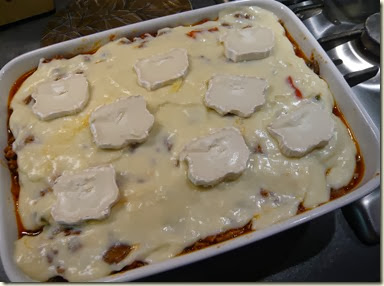 I always peel and pre-cook the marrow by putting thick, deseeded rings of it in a pan of boiling water for a few minutes.  Then I turn the heat off and leave it in the water to continue cooking while I make the filling and the sauce.

On this occasion I used 500g lean minced beef and made a kind of bolognaise/cottage pie concoction using onions, carrots, peppers, mushrooms, tomato purée, and enough stock to make it thick and not runny.

I placed the cooked marrow rings in a baking dish, spooned the meat mixture in and around them and poured a thick cheese sauce over the top.  I also added a few slices of goat’s cheese just because I had it in the fridge and it needed using up. 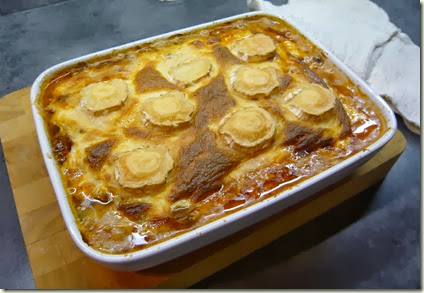 Bake at 180°fan for 20-30 minutes until browned and bubbling.  You can just have it by itself, or with salad or vegetables.   A dish like this would easily serve four hungry people.  It’s great comfort food for chilly autumn evenings.