LIVER WITH BACON AND ONIONS 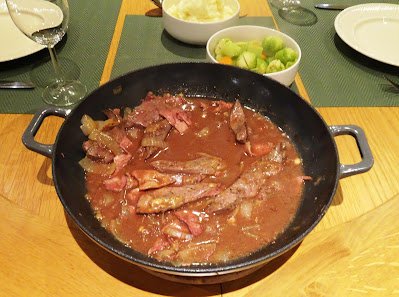 Liver is the only offal I enjoy eating.  My mum loved it and we had liver with bacon and onions regularly as kids.  It's dead easy to make, taking only as long as the veg take to cook and you have a delicious, cheap and nutritious meal on the table in super quick time. 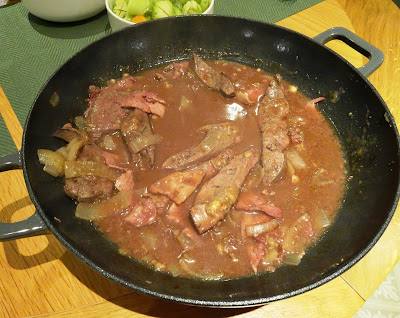 This is my mum's recipe, or rather, her way of cooking it.  I have never consulted a recipe for liver and onions and have always made it this way ever since I left home, having watched her make it a zillion times.  She always used lamb's liver and would dip the sliced liver in seasoned flour before cooking it in lard, which I did too for about the first thirty years of making it.  Nowadays I just sprinkle the flour into the sauce as it cooks.  Mostly she would cook it entirely on the hob, perching a saucepan lid or plate on the pan to cover it.  Sometimes she would transfer it to a Pyrex dish and finish it in the oven, usually if we were having baked potatoes with it.  They would already have been in the oven for some time and she was not one for wasting the gas if there was the shelf space!
The other main difference between then and now is that it would have been unheard of to serve slightly pink, undercooked liver in our house.  My mum would have been horrified at the very idea.  Everything we ate was well cooked.  Something to do with old ideas about food hygiene perhaps, bearing in mind that we didn't own a refrigerator until I was probably in my early teens.  They were way too expensive in the early 60's and well beyond my parents' means.
On this occasion we had ours with mashed potatoes and green veg.  Yum !!
Ingredients
Roughly 250-300g sliced lamb's liver
2 rashers smoked bacon (back or streaky, either is fine)
1 large onion
1 tbslp vegetable oil
1 red oxo cube
Worcestershire sauce
splash of red wine if you have it open (optional)
1-2 tblsp plain flour
Method
Peel and chop the onion coarsely, not too fine.  Heat the oil in a large frying or sauté pan and cook the onion gently over medium heat until soft and just beginning to brown, 5-10 minutes.  Slice the bacon rashers into large pieces and add to the pan.  Cook for about 5 more minutes until the bacon is cooked.
Cut the liver into evenly sized slices if not already so and remove any sinewy bits if necessary.  Add to the pan and cook gently, turning often until browned all over.  It will still be pink inside and oozing slightly.
Crumble the oxo cube into the pan and pour in the wine and enough boiling water to make a sauce.  Use as much liquid as you like depending on how much gravy you want!  (We like plenty if we're having mash!)  Stir to dissolve the oxo cube then sprinkle in a tablespoon of flour.  Stir again to mix in the flour and remove any lumps.  Add more flour if you have lots of liquid until the sauce is as thick as you like.
Add salt and pepper, a good splash of Worcestershire sauce, stir well and put a lid on the pan.  Cook for a further 5-10 minutes until the liver is cooked through.
Serves 2-3 depending on appetite and how much veg you have on the side.