PILCHARDS ON TOAST, NEW CAKE STANDS AND SOME SAD NEWS 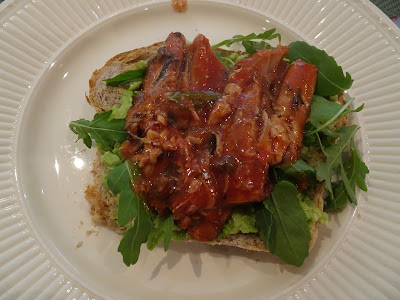 Now I know this may be an odd thing to post about but bear with me.
The recipe, if you can call it that, popped up in my FB feed and I was instantly compelled to make it for lunch!  We had it that day.
I was brought up on pilchards.  Not sardines*, but tinned pilchards in tomato sauce, warmed in a saucepan or in the oven and served on thick slices of toasted wholemeal bread.  Proper Hovis bread that had that delicious and unique aroma that Hovis doesn't have any more.
We usually keep in stock those very small tins of Glenryck pilchards in tomato sauce and at around 50p a tin they are just the right size for lunch for two.  The tins usually contain two plump pilchards that when split open and served with hard boiled egg make one of our favourite salads.
However, this particular recipe is a bit more sophisticated than just pilchards on toast!  It includes crushed avocado and rocket.  So, late to the party as usual, I have finally discovered that crushed avocados can be quite nice - how exciting that you can do more with an avocado than just serve it in wedges in a salad or prawn cocktail!
On the day I spotted the recipe I happened to have both a packet of ready washed rocket and two avocados in the house.  We also had a home made wholemeal loaf that Nick had made the day before.  You can see the toast recipe here, although it is actually for sardines and includes a sprinkling of chilli seeds which I omitted.
Ingredients
2 slices wholemeal bread
1 avocado
1 155g tin Glenryck pilchards in tomato sauce
a handful of rocket.
Method
Empty the can of sardines carefully into a dish or plate and split them into two along the back and open out.  If like me you are not partial to the larger bones remove the spines.  Transfer carefully to a small saucepan so that they don't break up into pieces and heat gently.
While the sardines are warming through toast the bread.  Halve the avocado and remove the stone then the flesh with a dessert spoon.  Put the flesh into a small bowl and mash with a fork.
Spread the mashed avocado on the toast, top with the rocket then the sardines and serve warm straight away.
Serves 2.
*A sardine is a small pilchard.  In other words, pilchards are bigger and plumper than sardines. 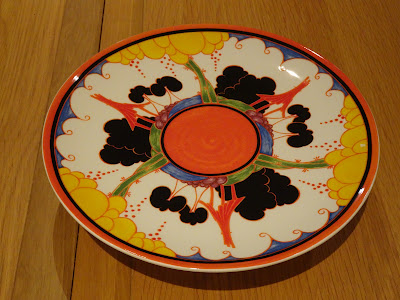 Now for the cake stands.  I had a couple of Ebay successes recently and added to my collection.  This one is a Clarice Cliffe creation by Wedgwood and I was thrilled when it arrived.  I was not so lucky with the next one. 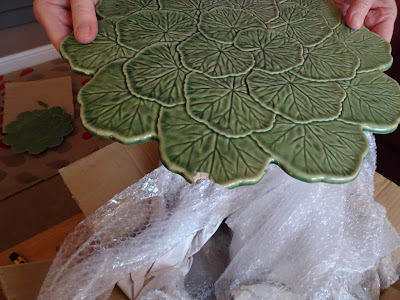 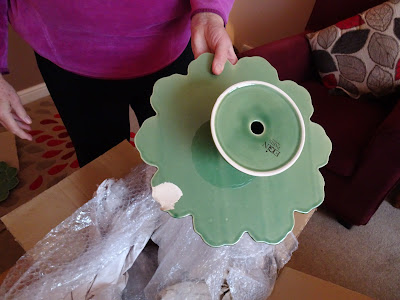 I often see cabbage leaf pottery on sale at French brocantes (a brocante is like a flea market) and it is usually quite pricey.  Most of it is also quite hideous.  I spotted this cake stand on Ebay just after I had already bid on the Clarice Cliffe one and it also came with two fairly large plates.  I was not fussed about having the plates but coveted the cake stand.  I turned out to be the only bidder and got the lot for £15.
Unfortunately the seller made the double error of not wrapping it very well and sending it via Hermes.  Over the last few years we've been doing a dog walk that begins at a small car park on the edge of town.  It's used by Hermes to decant parcels from their huge lorry to the cars and vans that deliver them to people's homes.  I have seen the way the parcels are handled and personally I would never use them to send anything even vaguely fragile or more valuable than a cheese sandwich.
The seller has refunded my money and the three items are now in the bin.  Such a shame.  It will be a long time before I ever see another one like it I expect.
Lastly, the sad news as mentioned in the title is that the cake stall that we held at my place of work every year is no longer going to take place.  Not just this year (for obvious reasons) but not ever.  The owners of the business have decided that the Children in Need charity is already cash rich and any funds should be raised a different way and given to a different charity.
So, no more huge baking sessions to supply the cakes.
The first time we did it in 2003 we raised £130.  Last year we raised £2,113 and the grand total over the years is well over £15,000.  That's an awful lot of cake and I shall miss doing it.  It's what renewed my interest in baking and extended my repertoire beyond the annual Christmas cake and the occasional birthday chocolate cake.
~~~~~~~~~~~~~~~~~
I have done a bit of research and discovered that the "lettuce leaf" plates and cake stand are quite sought after and can be obtained elsewhere for quite large sums of money.  The design is actually "geranium leaves" and now I look at the pictures they do look like geranium leaves.  I can get a cake stand for £52 and the plates for £35 each.  What a shame that the seller did not pack them more carefully.