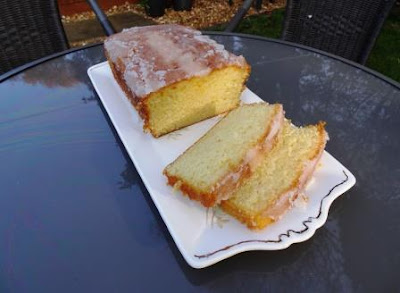 We are lucky where we live in the UK in that we have a milk delivery.  The milkman brings two pints on Tuesdays and Thursdays and three on a Saturday, which amounts to seven pints a week or one per day which is exactly right for us.  He also brings half a dozen eggs on Thursdays.  For some reason we had not been getting through the eggs and I also had some lemons lurking in the fridge.  Every time I opened the fridge door they were calling "lemon drizzle" to me very softly and I remembered a recipe I had seen in a blog post here.  It's a Mary Berry recipe for a lemon drizzle loaf cake.
I wondered which Mary Berry book it came from, had a quick shufti through my collection of her cookbooks (I have a few) and couldn't find it.  There are plenty of other lemon cakes, including the lemon drizzle traybake which appears in several of them, is delicious and which I have made a few times (see here).  However, the loaf cake recipe appears all over the place on the internet, attributed to Mary Berry in two versions, a 3-egg version like this one and a 4-egg version and both are highly acclaimed.  So although its origin is a mystery it definitely looked like I should have a go. 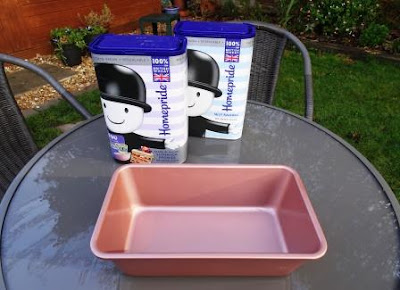 I started gathering the ingredients (there aren't that many) and then discovered I was almost out of self raising flour.  Now that's a first as I'm not one for running out of flour!  A person who frequently needs an emergency cake usually has that covered!  However........
Where we now live in the UK we have lovely neighbours and our nearest, Janet and Malcolm, are also cake enthusiasts.  I can't remember how we started but we have a sort of cake exchange thing going.  We get a couple of slices of hers whenever she bakes and vice versa.  How wonderful is that?
Janet makes fabulous light and fluffy sponges and in one of our many conversations about cake she mentioned that she uses something called "sponge flour".  When the panic buying of flour had died down and all kinds of flours I had never heard of started appearing in the supermarkets Tesco had a whole shelf of Homepride sponge flour and I can honestly say I don't think I had ever noticed it before.  It's in a purple box instead of the regular blue box and I bought some.
With my other ingredients measured out and the lemon zested I remembered the purple box and with some relief fished it out from the back of the cupboard.  I used the last of my ordinary SR flour and topped up the quantity with the sponge flour, so about half and half.  Note to self: must stock up on flour next time I do a supermarket order or feel brave enough to venture into the shop in person.
I used my new loaf tin, bought in The Range when they had a promotion on their range of pink baking tins a few months ago.  It's slightly larger than a standard 2lb loaf tin, very sturdy and as the recipe seemed to make a bit more mixture than I expected this tin was perfect. 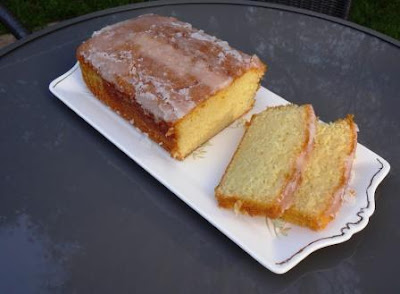 The recipe is essentially a classic Mary Berry all-in-one type of recipe.  Marie Rayner who wrote the blog post also added a splash of lemon extract to hers, which I happened also to have in stock and as we like our lemon cakes very lemony I did the same.  The cake was delicious.  It had a lovely, even, light and fluffy crumb, just the right amount of lemonyness and a lovely crunchy topping.  It may well supersede my previous go-to lemon drizzle recipe which you can see here.
Ingredients
For the cake
175g softened butter (I used Stork for Cakes)
175g caster sugar
175g self raising flour
3 large eggs
¾ tsp baking powder
½ tsp lemon extract
zest of 1 lemon
For the drizzle topping
100g granulated sugar
juice of 1 lemon
Method
Grease a 2lb (900g) loaf tin or use a paper liner.  Also add a strip of baking paper long enough to go the length of the tin and hang over the ends to enable you to lift the cake out.  This is a good idea as the cake is quite fragile when still warm.  (It goes under the paper liner!)
Preheat the oven to 180°C / 160° fan / gas mk 4.
Put all the cake ingredients into a large bowl and using an electric whisk beat together until smooth and well combined.
Spoon the mixture into the prepared tin and level the top.  Bake for 40-45 minutes until done.
Remove from the oven and leave in the tin to cool for about 10 minutes.  While it's cooling make the drizzle topping by mixing the lemon juice and sugar together.  Pour the mixture over the warm cake.
After the 10 minutes carefully lift the cake out of the tin using the paper strips and transfer to a rack to finish cooling.
Cuts into 8-10 slices.