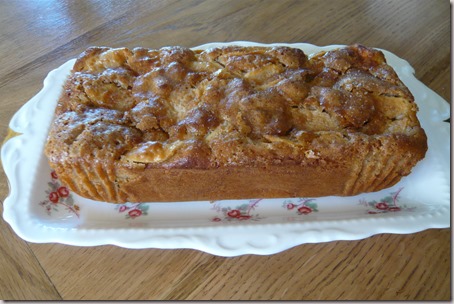 I was given some French cooking apples one day last year.  In France many of our friends have apple trees growing in the gardens, fields or orchards that came with the lovely old stone houses, planted by previous generations many decades ago and often nobody has any idea what kind of apples they are, they just keep on producing every year.

We were sad to lose our best apple tree after only one harvest.  It was in the exact place where our filter bed had to be, the only place it could be because of the lie of the land, when we had our new septic tank, and it had to be cut down.  We have two other trees, both of which were stunted and in poor shape because of where they had been planted and previously ignored but we have freed them from surrounding weed trees and hopefully lavished enough TLC on them to allow them to thrive and produce more fruit in time. 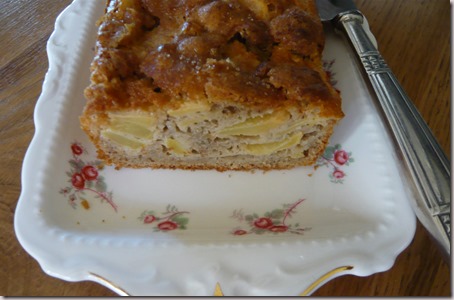 These were a green apple, variety unknown, too tart for an eating apple but firmer and sweeter than a Bramley.  They were all shapes and sizes, some a bit warty and discoloured, some already nibbled in places but I have learned that fruit donated by friends is a precious thing, given with love and also with relief that you can use them and help them out with their glut of fruit!

Bearing in mind my current quest to find the perfect apple cake recipe, I remembered having made this cake but not having posted about it yet. 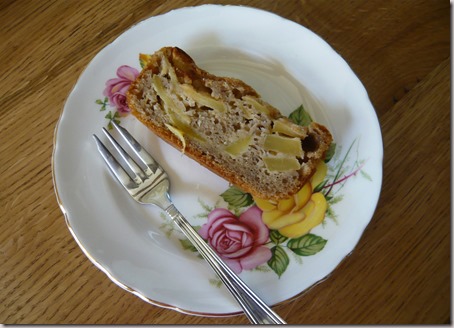 The recipe comes from one of the Hairy Bikers diet books.  It’s made with oil not butter and not a lot of sugar, producing a cake that is allegedly around only 200 calories a slice.  I was wanting to give a cake away (another way of passing on the apples) but to someone who doesn’t eat a great deal of cake, so instead of making it into one 23cm round cake I made two smaller ones by dividing the mixture between two loaf tins and adjusting the cooking time.  I chose this recipe not because it was low calorie but because it was the first one I found that used cooking apples. 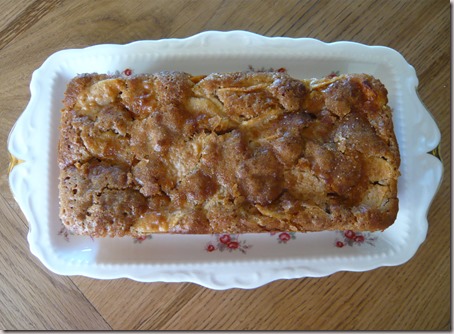 The house smelled glorious while the cakes were cooking and the cakes themselves were lovely.  They had a fairly loose and open texture, almost muffin-like.  They were full of apples and definitely not over sweet.  A very nice recipe that I shall use again and you can see the original here.

zest and juice of ½ lemon

Peel the apples, cut in half and remove the core with a melon baller or metal spoon.  Cut into quarters then slice thinly, put into a bowl, sprinkle over the lemon juice and set aside.

Sift the flour, baking powder and spices into a large bowl.  In a separate bowl whisk together the eggs, oil, milk and sugar.  Pour the wet ingredients into the flour mixture and stir with the whisk to combine, making sure there are no lumps.

Tip the apples into the mixture and mix to combine evenly then pour into the tin (or divide equally between the two loaf tins).  Sprinkle the extra demerara sugar over the top.

Bake for about an hour until the cake is golden brown and passes the skewer test.  (The two loaf cakes will take 40-45 minutes but keep an eye on them after 30 minutes.)

Cool in the tins for 10 minutes then turn out onto a wire rack to finish cooling.

The large cake cuts into 12-14 slices, each loaf into 8-10 slices.  Makes a very nice dessert if reheated and served warm with cream, custard or ice cream (if you don’t mind the extra calories).