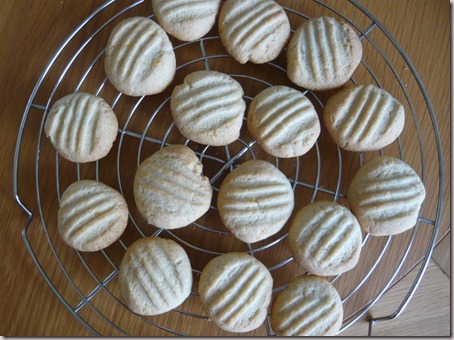 I rarely make biscuits of any kind but, with visitors expected, I decided to make some for a change.  Time was short and I thought they would be quicker and easier to do than rustling up a cake or buns of some kind, with fewer ingredients to weigh out and less baking time needed. 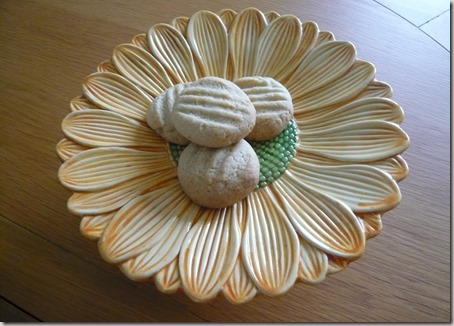 I used Mary Berry’s recipe for Fork Biscuits, adding some lemon zest for flavour.  They were done in no time at all and turned out really well. 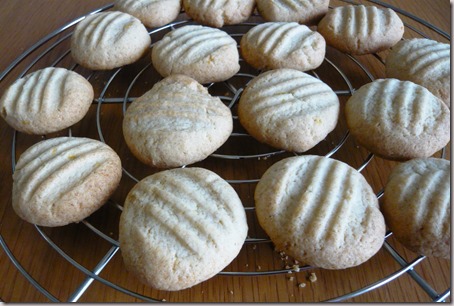 They were crisp, crunchy, crumbly, light and buttery with a hint of lemon.  Hardly any effort at all to make and well worth it.  They were just the right size, easy to eat and kept well in a tin for a few days – until they were gone!  An excellent recipe that I will definitely be using again.

Put the butter into a large bowl and beat until light and soft.  Beat in the caster sugar and lemon zest.  Next beat in the flour.

Using your hands, bring the mixture together into a ball and flatten it slightly.  Cut it into quarters then cut each quarter into four which will make 16 balls about the size of a large walnut.

Arrange the balls on the baking trays, 8 on each, spaced well apart.  Using a fork dipped into a jug of cold water, flatten each biscuit and leave the fork pattern in the top.

Bake for 15-20 minutes until light golden brown.  Lift carefully off the trays and cool on a wire rack.