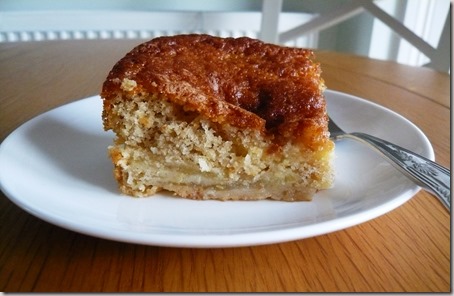 In the beginning…….a cake was a cake and a pudding was a pudding.  Then……along comes the dessert cake.

In my book, a cake is something you can pick up from the plate with your fingers and eat without having too much of it running down your chin.  You might want to use a cake fork in polite company but you wouldn’t expect to look like a bag lady after just a couple of mouthfuls.

A pudding is something you would eat with a fork or, better still, a spoon, especially if it’s accompanied by a good dollop of custard, cream or ice cream.

So where, may I ask, does the dessert cake fit in? 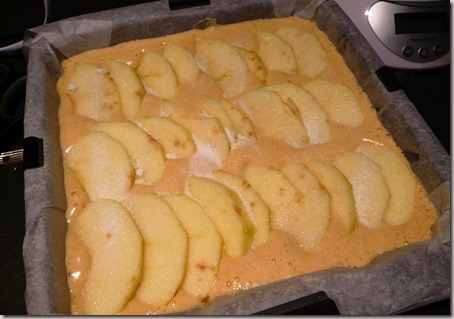 This recipe comes from a book by Rachel Allen called “bake” and it’s described as a cake.  And very popular it is if you are to believe the words in the book.

I love Rachel Allen’s recipes.  They always work and I have never had a bad result with one.  But this is not a cake, it is most definitely a pudding.  Or, to be charitable, a dessert cake.

There was a clue in the recipe where it said to leave the cake to cool in the tin and serve in squares.  No mention was made of turning it out and serving it on a plate.  It was my idea to do that, thinking it was a cake because it was called a cake. 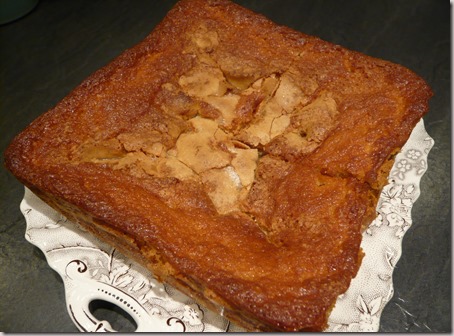 The recipe states quite clearly that the apples will sink to the bottom and they did.  No problem with that except that that would make it impossible to eat the cake as if it was a cake.  A pudding it most definitely is.  The next time I make it – and there will be many, many next times as it was utterly delicious – I will make it in a pudding dish and serve it in slices, or even spoonfuls, straight from the dish and have done with it!

There was a nervous moment as I took it out of the oven and saw that for some reason the middle had developed an entirely different crust from the rest of it.  I presumed the middle was still completely uncooked but no, it was beautifully done.  Although it did sink in the middle. 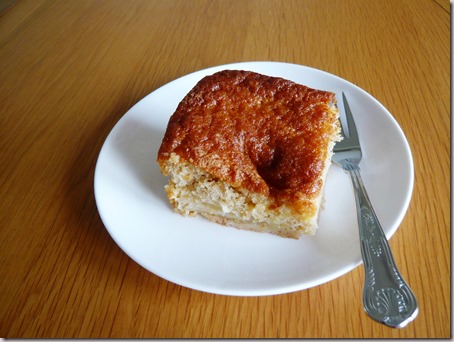 So, the next time I think I might make an apple crumble or Eve’s pudding, I will make one of these instead.  I won’t bother too much about how the apple slices are arranged on top because they sink to the bottom where you can’t see them.

In a large bowl, whisk the eggs and sugar together with an electric whisk until thick and mousse-like and ribbons of mixture form when dropped from the whisk.  This may take about 5 minutes.

Put the milk and butter into a small saucepan and heat gently until the butter is melted.  Pour in to the egg mixture and whisk in as you pour.

Sift in the flour, cinnamon and baking powder and fold in gently.  Pour into the prepared tin.

Peel and core the apple and slice thinly.  Arrange over the top of the mixture and sprinkle the extra caster sugar on top.

Bake for a further 20-25 minutes until golden brown and cooked.

Cool in the tin and serve in squares or spoonfuls with custard, cream or ice cream.