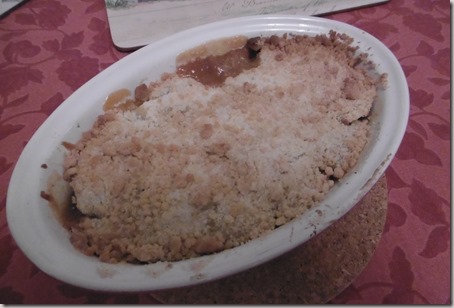 We are fans of the Great British Crumble in this house.  As a child I had crumble for pudding after Sunday Dinner most weeks and my mum would make it by hand from self raising flour and margarine.  She never used butter in baking as it would have been far too extravagant, using lard for pastry and margarine in puddings and cakes.

Once I was old enough – or tall enough – to help with the baking, the rubbing in was often my job – a good way to keep a child occupied and quiet as we listened to “Two Way Family Favourites” on the wireless and she got the rest of the dinner ready. 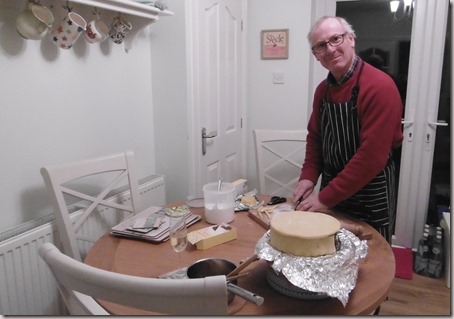 We were later than ever in icing our Christmas cake this year and it didn’t get done until the day after Boxing Day.  Nick said he felt up to it so I let him get on with it.  Unfortunately he was tired afterwards and didn’t feel up to doing the clearing up…..hmmm….

Looking at some apricot jam leftover in the saucepan and some scraps of marzipan an idea came to mind about not wasting them. 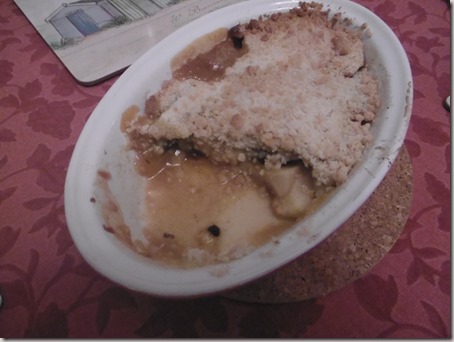 I have been a fan of using bits of marzipan in pies, crumbles and cobblers ever since I watched Ruby Tandoh do it on “Bake Off” a few years ago.  She was the young contestant that had a habit of becoming tearful and emotional at regular intervals but she was a very good baker and made it as far as the final I think.  I can’t remember what it was that she made but she put chopped marzipan into whatever it was and it sounded like a good idea and I have been doing it occasionally ever since.  It melts and adds an almondy sweetness which is never a bad thing. 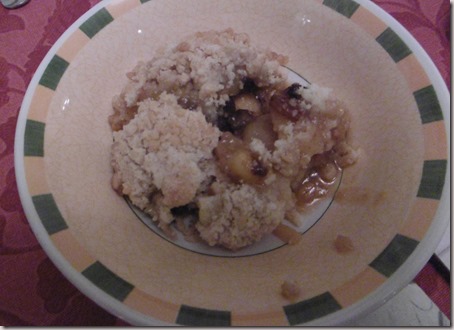 So, to make this crumble there isn’t really a recipe, just a concept.

I smeared the melted apricot jam in the bottom of a buttered baking dish, just to use it up.  The crumble would have been just as good without it but any jam that needs using up would probably do.

I peeled and sliced some dessert apples into the dish, using enough apples to come about two thirds of the way up.  I always add the apples the way my mum did.  She never cored them or used a chopping board but she would cut slices from the apple straight into the dish, leaving the core behind in her hand.

I then dotted some bits of chopped marzipan amongst the apples and blobbed some spoonfuls of mincemeat on top.  I didn’t add any more sugar as I thought the mincemeat would make the crumble plenty sweet enough and it did.

I then sprinkled some crumble mix over the top and baked for about 25 minutes until the crumb was golden brown and the filling bubbling around the edges.

As for crumble mix, I often make much more than I need and keep leftover mix in a bag in the freezer.  It’s ready for instant use without any need to defrost it.  I’m also not averse to using ready made packet crumble mix when I’m pressed for time.

We had our festive crumble with custard but cream, ice cream and leftover brandy butter would would also have been good.  There is still some mincemeat left in the jar so I’m sure there will be more festive crumbles to be enjoyed this winter.

Looking at these photos, I realise that the camera I bought to replace my stolen one (it was in the handbag that some toerag took in Barcelona last October) is nowhere near as good as I had thought it would be.  I bought it because the price was about the same and I thought it was enough to pay, but, thinking about it later, the original one was half price in a sale about ten years ago which could make it about four times the cost of the one I bought to replace it.  I always believed that you get what you pay for and this proves it.  Hey ho.