ROOT VEGETABLE CAKE (or a tale of two tins, part one) 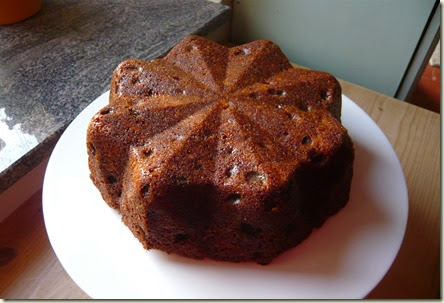 Not long ago there were several recipes for leftover vegetable cakes popping up all over the place.  A link to this one on the BBC Good Food website turned up in my inbox and with friends coming round for tea I decided to have a look what was lurking in the fridge drawer. 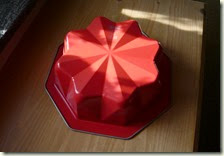 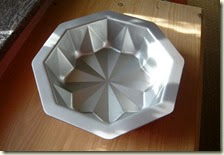 I was also keen to give my new cake tin a try.  I spotted it on a visit to Ikea for shelving, or lighting, I forget which, and couldn’t resist it.

The cake is described as a leftover vegetable cake but of course it doesn’t use leftover cooked veg – raw veg only.  I used two carrots, one parsnip and a chunk of swede. 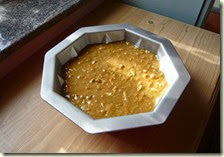 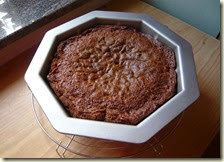 There’s a note on the recipe that the cooking time may vary due to the water content of what ever veg you use.  My mixture seemed very wet, possibly due to the swede I thought, and seemed to take forever to bake.  At one point the cake was still very runny in the middle after an extra twenty minutes and I began to think it would never be cooked.  The outer part was looking brown enough so I covered it in foil and put it back in the oven until eventually it was done.  I suspect that using a tin that was a different shape and capacity to the one stated might also have something to do with the longer cooking time.

Although it was surprising that it took so long to bake, as I hadn’t put all the mixture in the tin.  I remembered that a cake tin should not be filled by more than two thirds and this left quite a bit of mixture over, which I used to make some muffins.  They only took twenty minutes to cook and were lovely. 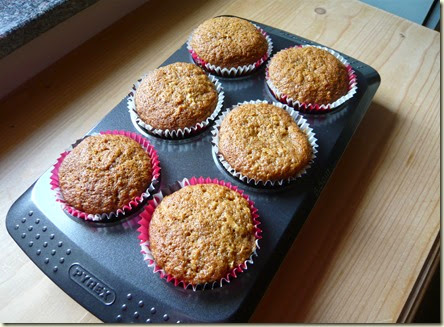 The cake took so long to cook that it took an equally long time to cool down.  It was still warm when my guests arrived so I never got to put the orange drizzle icing on the top.  It looked pretty enough without it and it tasted lovely too.  I dare say the orange icing might have added something – a bit of extra orange flavour!  But I will definitely make it again, with or without the icing.  And I was very pleased with my new tin.  The cake slipped out effortlessly after ten minutes of cooling in the tin. 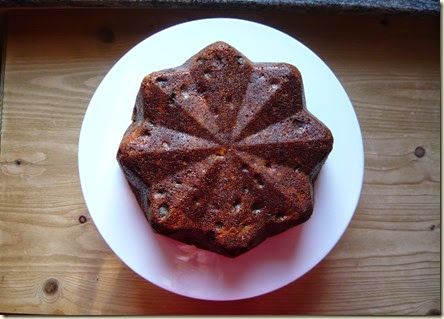 300g raw vegetables, such as carrot, parsnip, swede, squash, pumpkin, or a combination, peeled and grated

Put the sultanas with the zest and juice of one orange into a glass bowl and microwave on high for two minutes to plump up the sultanas.  Leave aside to cool.

Mix together all the dry ingredients in a large bowl.

Mix together the sultanas, melted butter and beaten eggs and pour into the flour mixture.  Mix well.  Add the grated veg and mix again.

Spoon the mixture into the prepared tin and level the top.  Bake for 35-40 minutes or until done.  Cool in the tin.  (Cool for ten minutes only before turning out onto a wire rack if using a bundt style of tin.)

When cool, decorate with icing made with the icing sugar, the zest of the second orange and enough of the juice to make the icing runny.