INDIAN CHEESECAKE (or a tale of two tins, part two) 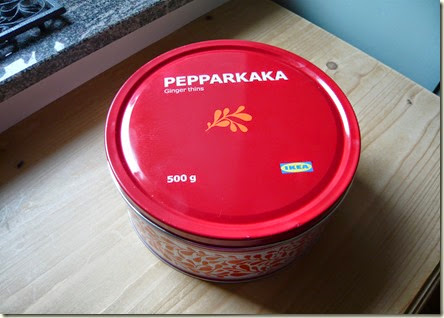 The other tin that I bought on our visit to Ikea for shelves or lighting (I still can’t remember which) was this tin of biscuits.

There was an enormous mountain of them by the checkouts and I carefully selected a tin that wasn’t dented – a good proportion of them were.  Unfortunately as we loaded our things from the conveyor back into the trolley (why do we never remember to take a bag into Ikea?) it somehow fell onto the floor so I ended up with a dented tin full of broken biscuits! C’est la vie! Luckily some of the biscuits were still in big enough pieces for dunking but there were a lot of crumbs so I thought it was the perfect excuse to make a cheesecake.  I rarely make cheesecake on the grounds that they are simply too moreish and not at all good for you, but we were having visitors so I decided to go for it.

I chose a recipe from Annie Bell’s Baking Bible for something called “Indian cheesecake”.  I spotted it a few weeks ago when I was searching through the index pages of my recipe book collection for something to bake that began with the letter “I” for an Alphabakes challenge.  It appealed to me but I never got round to making it at the time. 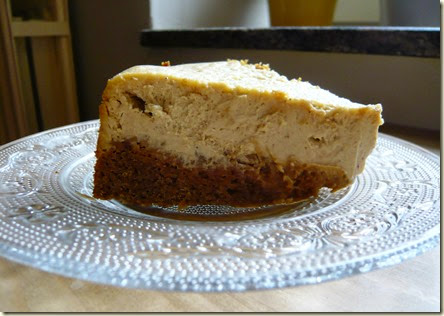 I’m not entirely sure why it’s called an “Indian” cheesecake.  In the recipe the base is made from a sort of crumble mix of polenta and flour but of course I already had a load of ginger biscuit crumbs so I obviously used those.  Maybe the Indian label comes from the spices in the mixture, ginger and cinnamon, but they to me they are more reminiscent of a English tea room than an Indian restaurant.

In any case, it was truly delicious.  And I really mean truly.  Nick pronounced it the best pudding I have ever made and it was demolished by our guests in double quick time and with second helpings.  Hence the reason for there only being one slice left by the time I took its picture!

I will certainly be making it again when I feel the need for an indulgent dessert.  If you fancy making it yourself I would recommend making it the day before you need it as you are supposed to chill for many hours or preferably overnight.  Which makes it even more the perfect dessert for visitors!

I give my adaptation of the recipe using broken biscuits and the ingredients I had available.

Bash the biscuits into crumbs, mix with the melted butter and press into the bottom of the tin.

Put all the other ingredients into a food processor and blend well.  Pour through a sieve onto the crumb mixture and bake for around 50 minutes.  The centre of the cheesecake should still have a slight wobble as you take it out of the oven.

Run a knife around the sides of the cake and leave to cool in the tin.  Cover loosely with foil and chill in the fridge overnight.

When ready to serve, remove carefully from the tin.  Dust with cocoa powder before serving if you like.