For a while now I have had an urge to bake a swiss roll.  I spotted the recipe for “luscious lemon swiss roll” in one of the Hairy Bikers books and felt it was time I had a go at something slightly more challenging than my normal baking.  You can see their recipe here but in the end I decided to opt for the Mary Berry version from her Baking Bible,  as it looked more straightforward. 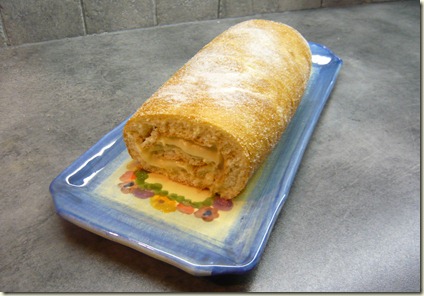 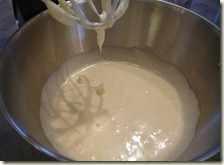 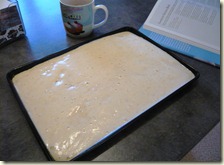 Making the sponge is easy enough.  You make a whisked fatless mixture and just have to remember to tip the tin to make sure it levels itself and flows into the corners, without pushing too much with a spoon as that would knock some of the air out. 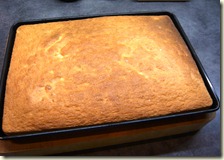 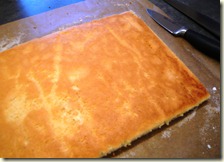 Once the sponge is baked things get tricky.  First of all you have to take a deep breath, take your life in your hands and tip your precious cake upside down onto a sheet of sugared baking paper.  There is nothing to be gained from dithering here, just get on with it, tip it over and hope for the best.  I was lucky and it turned out in one piece.

Before rolling it up you should trim the edges and cut a line in the sponge near to one end.  Then things get really scary. 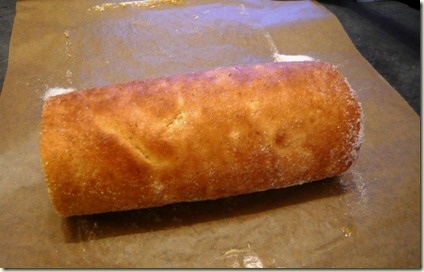 The Hairies suggest rolling up the sponge, then unrolling it and leaving it to cool before filling it and re-rolling.  I just couldn’t see that working for me.  I could imagine ending up with the whole thing in pieces even before I got the filling in, so I decided to go for Mary’s single roll-up method.

If you spread your filling on the cake when it’s too warm it apparently soaks into the cake.  I used buttercream as well as lemon curd and could imagine it melting and oozing out if the cake wasn’t cool enough.  On the other hand, if it was too cool it might not roll up and it might crack.

I decided to use the baking paper as an aid to rolling it evenly but that was not without its issues (to quote Paul Hollywood on the recent Bake Off series).  I rolled it away from me but once the first turn was made I discovered that you needed to be a very tall contortionist to be able to lean over and see what was going on on the other side of the paper !! 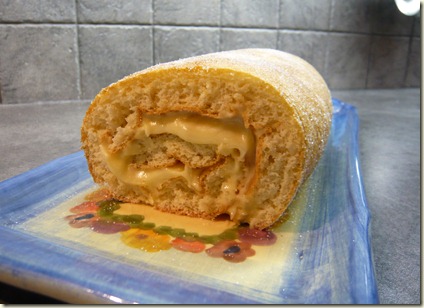 But it worked.  I was sure it had cracked as I rolled it up but if it did the crack was hidden underneath the cake and it held together. 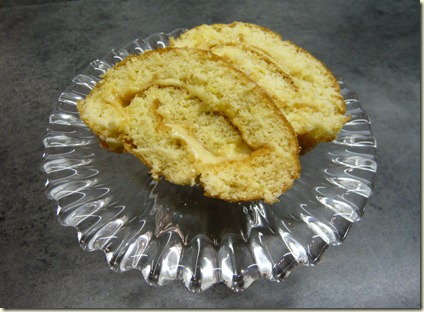 So it was a bit more fiddly than the things I usually bake and there were definitely a few nervous moments.  But it was much better than a shop bought cake and I would definitely make it again.

I am making this my second entry into this month’s Tea Time Treats Challenge, hosted this month by Karen at Lavender and Lovage, alternating with Kate of What Kate Baked.  The theme this month is citrus and I absolutely love that in a cake.

juice of ½ a lemon

First, make the buttercream.  Put the Stork baking liquid into a medium bowl, sift in the icing sugar, add the lemon juice and beat together until light and fluffy.  Set aside.

Using an electric whisk, whisk the eggs, sugar and lemon zest together until you have a very thick, pale mixture.  It is whisked enough when the beaters leave a trail as you lift them out of the mixture.

Sift the flour into the mixture and fold it in gently using a metal spoon.  Pour the mixture into the prepared swiss roll tin, tipping it a little to encourage the mixture to flow into the corners.

Bake the sponge for 10 minutes until the cake is golden brown, shrinks away from the sides of the tin and springs back to the touch.

While it’s in the oven, cut a piece of baking parchment bigger than the tin, spread it out on the worktop and sprinkle with caster sugar.

Remove the cake from the oven and immediately invert the tin to tip it upside down onto the sugared paper.  Remove the paper from the bottom (now the top) of the cake.  Use a sharp knife to trim the edges and score a line 1cm in from one short end, without cutting through the cake.

Allow it to cool slightly, spread with the lemon curd then the buttercream.  Turn the cake so that the scored short end is nearest to you and, using the paper to help you manoeuvre the cake, take a deep breath and roll it up.

Transfer to a serving plate and sprinkle with a little more caster sugar.