I decided to make a cake for my friend Elizabeth’s birthday and it needed to be gluten free.  I liked the look of the cake in this recipe on the Good Food website for cherry bakewell cake.  I loved the way the icing dribbled over the top of the cake in the picture !! 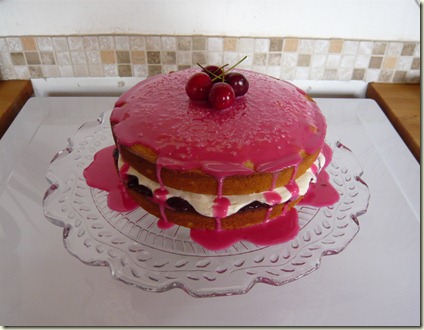 In the end I used a recipe from a book called “the gluten-free baker” by Hannah Miles, which I borrowed from the library.  I adapted the recipe for Victoria sponge cake, which contains lots of ground almonds anyway, by substituting the vanilla extract in the original recipe for almond extract.  I then used cherry jam in the filling instead of strawberry and decorated the top with pink icing and cherries. 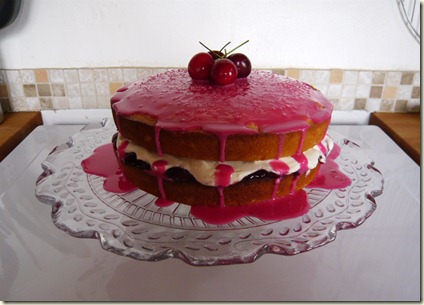 I had never used gluten free flour before and because there were a lot of ground almonds in the recipe I beat the butter and sugar really well as this was going to lift them and make the cake light and not dense.  I also had to put a lot of effort into beating the cream.  Being in France I used crème entière, which seems to need a lot more whisking to become thick than the English double cream I am used to. 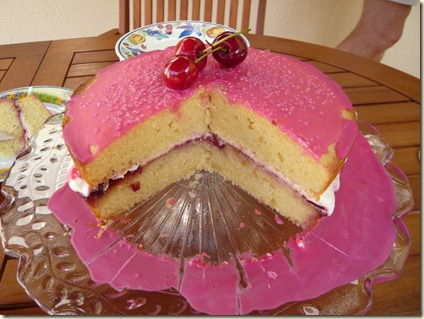 I was also very careful to avoid accidental contamination of ingredients, for example using an unopened bag of sugar and a new block of butter.  It only takes a little gluten to cause a problem, such as from lazily dipping the spoon used for taking ordinary flour into the sugar bag, or a few toast crumbs in the butter.  It just isn’t worth the risk. 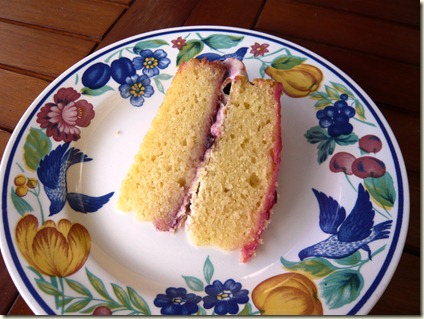 Believe it or not, the colour of the icing is exactly what I wanted.  After all if a girl can’t have pink on her birthday it’s a poor do !!  The icing was quite runny and drizzled nicely over the edge of the cake. 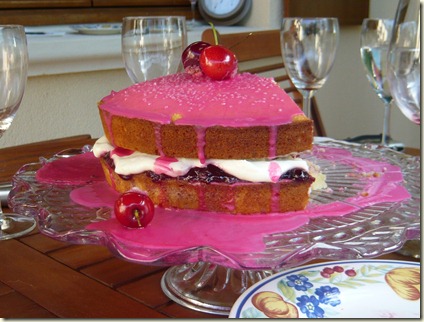 However, it was possibly a little too runny as it continued to dribble down the sides of the cake, forming a pink puddle on the cake plate.  This was lucky in a way as we had a 50-minute drive to Elizabeth’s house and with the cake firmly glued to the plate with icing all I had to worry about was the top half sliding off the bottom half as we made our way along the twisty lanes !! 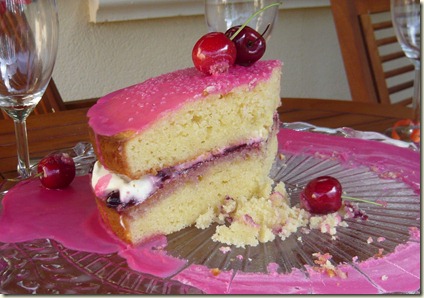 I carried the cake wedged into a box on my lap and it arrived in one piece.  I could have taken it off the plate, cleaned the icing from the plate and putting the cake back but Elizabeth liked the look of the puddle of pink icing so we served it just as it was.  A girl can never have too much pink !!

Divide between the two tins and bake for 25-30 minutes until the cakes are firm and golden and pass the skewer test.  Remove from the oven, turn out and cool on a wire rack.

Whip the cream until firm and spreadable.  Spread the jam on one of the sponges and spread the whipped cream on top.  Put the other cake on top.

Sift the icing sugar into a bowl and add 2 drops of pink colour, or enough to achieve the right depth of pink.  Add water, a teaspoon at a time, and mix together until a runny icing is formed.

Spoon the icing onto the top of the cake, somewhere in the middle and, using a small spatula or back of a spoon, push the icing towards the edge so that it dribbles down over the sides.  Sprinkle some sugar crystals on top and decorate with the fresh cherries.

Cuts into 10-12 slices.  Keep refrigerated because of the fresh cream.