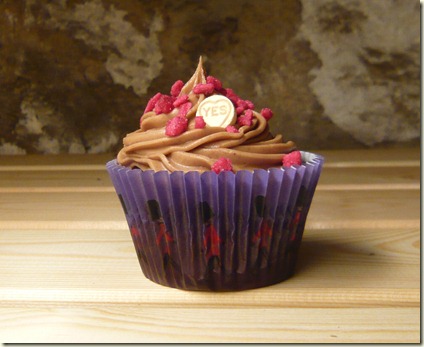 Quite a while ago, what seems like eons in fact, and on some other planet, I opted to take part in an ingredient swap organised by Ruth at Makey Cakey.

I was paired with Sarah, of the lovely blog, The Cupcake Architect. 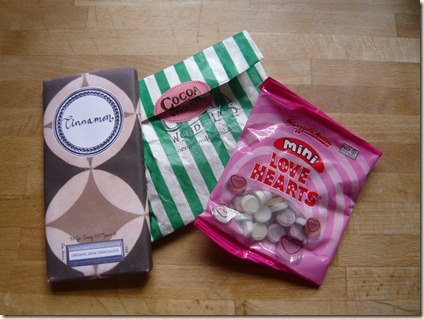 There was some organic cinnamon flavoured chocolate, a little packet of crystallised rose petals and a packet of mini love hearts.  Now what on earth should I make out of them ?? 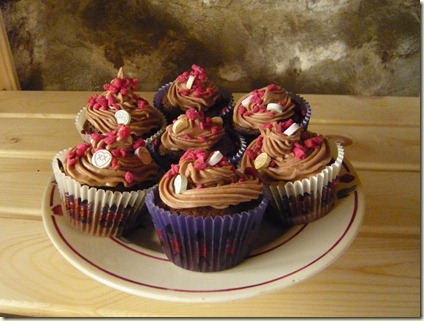 Then things got busy at home and at work and my poor scrambled brain could not get to grips with mystery ingredients.  So I brought them on holiday with me to France - hoping for the time and lack of distractions I needed to bake something a bit special.

And that is where I am as I write this now, sitting outside on our little terrace which overlooks the rooftops of the village.  The church bells have chimed their last chime for the evening at ten o’clock and all is quiet.  The swifts and swallows have long since finished swirling overhead and the bat formation team has gone to bed too.  The only things which break the silence are the occasional hoot of an owl and the murmur of a distant harvester as the farmers work late in the fields.  The night air is pleasantly cool and we will no doubt still be sitting here for another hour, finishing our wine and enjoying the peace and quiet and the view of the roofs and chimney pots of our neighbours.

This is what I mean about another planet. 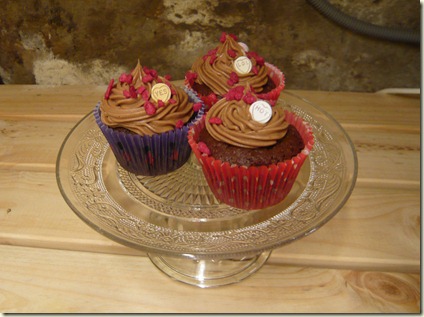 To make the cupcakes I used Stork Baking Liquid, adapting my strawberry cupcakes recipe, but only put in a little cocoa powder so that the delicate flavour of the cinnamon milk chocolate in the icing would not be overpowered.  They were yummy – the rose crystals added a lovely crunch and unusual flavour to the topping. 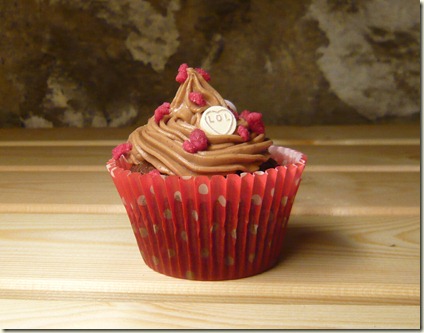 I baked them in the afternoon when it was gloriously sunny but the light was fading by the time they were finished, so I took them down to the cellar where it was cooler, to cover them up and leave them until the morning to take their pictures.  But they looked so pretty on our brand new cellar shelves that I photographed them there and then. 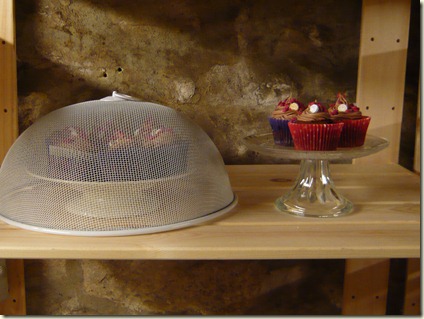 Before long these shelves will be covered with cobwebs and all the stuff that we keep in the cellar……..

Here’s my recipe for chocolate cupcakes, decorated with cinnamon chocolate, crystallised rose petals and love hearts.  And a huge thank you to Sarah for sending me such lovely ingredients and inspiring me to bake something I wouldn’t usually bake.

your own choice of decorations or sprinkles

Put the Stork liquid, sugar and eggs into a large bowl.  Sift in the flour, baking powder and cocoa and beat until smooth and creamy.

Divide between the cupcake cases and bake for 25 minutes until firm to the touch.   Cool on a wire rack.

To make the icing, break the chocolate into squares and put into a heatproof bowl.  Place the bowl over a pan of gently simmering water, making sure the bowl does not touch the water,  and leave until the chocolate is melted, stirring once or twice.  Remove from the heat and set aside to cool.

(A good tip here is that it is important to make sure the inside of the bowl is dry and no water gets into the chocolate or it will spoil.)

Put the butter in another bowl and sift in the icing sugar.  Beat until light and fluffy.  Add the cooled chocolate and beat again until smooth.

Pipe or spread a swirl of the chocolate icing onto each cake, sprinkle with the rose crystals and dot a few love hearts here and there.  There are no rules about what you should do with the remaining love hearts if you don’t use the whole packet………..