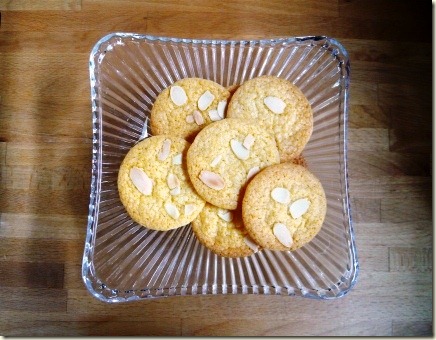 After my disaster with Jamie Oliver’s recipe for orange and polenta biscuits, then the success with the Cookie Girl’s recipe, I was interested to see how this one would turn out.  I found it in the little Hamlyn book, “200 gluten free recipes”. 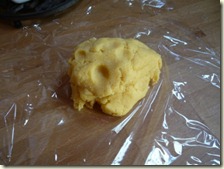 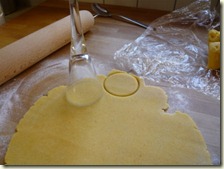 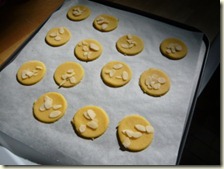 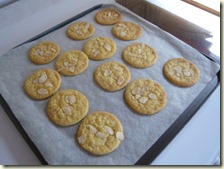 The recipe uses polenta, rice flour and ground almonds.  You make a dough, chill it for a while, then roll out very thinly before cutting into small rounds.  I didn’t have a suitable cutter in my little French kitchen so I used a small glass.

Interestingly, this is the only thing I have ever used this set of glasses for.  I spotted them in Ikea in Tours and thought they looked cute and the sort of thing we might find useful in our little French cottage.  Silly really, I would never have thought they might be useful in England.  But they were dead cheap, so that’s not so bad. 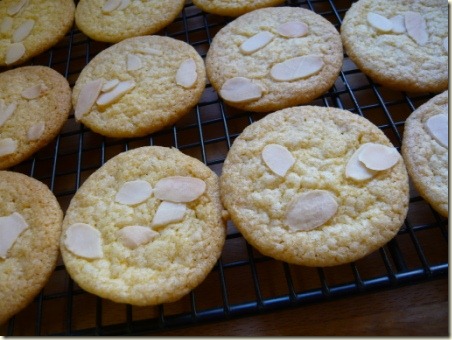 You sprinkle flaked almonds on top of the biscuits before baking and a very few minutes later they are done.

And absolutely lovely they were too.  Thin, crispy and very moreish.  In fact the last few were still very crispy two days later – we munched on them on our way back home to England. 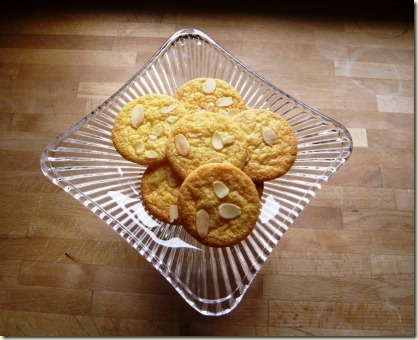 Whether you need a gluten free recipe or not, this one is a winner if you like a light, crispy biscuit that is not too filling.  Perfect with morning coffee or your cup of tea in the afternoon.  Luckily the recipe makes a large batch because as they are so thin and light, just a couple is simply not enough !!

This is what you need.

Put the polenta, rice flour, ground almonds, cream of tartar, bicarb, icing sugar and butter into a food processor.  Blitz until you have fine breadcrumbs.  Add the egg yolk and orange rind.  Process again until a ball of firm dough is formed.

Wrap the dough in cling film and chill in the fridge for 30 minutes.

Dust a work surface with rice flour and turn the dough out onto it.  Roll the dough out thinly and cut into circles about 4cm dia.

Put the biscuits on the baking sheets, allowing a little room for spreading.  Sprinkle each one with flaked almonds.

Bake for about 8 minutes until golden.  Leave to cool on the baking sheets for a few minutes then remove carefully and cool completely on a wire rack.

Makes about 20 biscuits.  They keep well in an airtight tin or box.