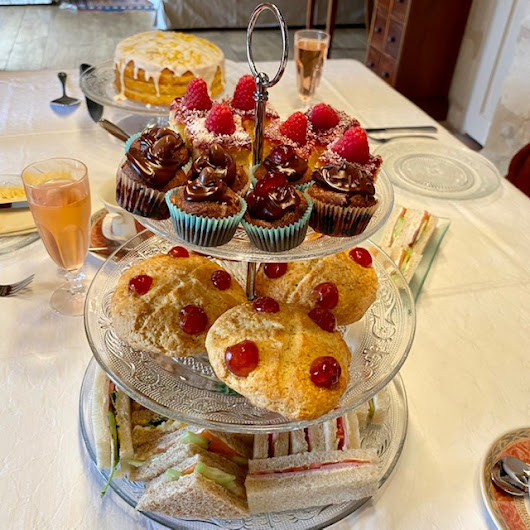 With all the Queen's Jubilee celebrations for being on the throne for 70 years there has been much talk of street parties and afternoon teas.  In fact in our part of France friends held their own afternoon tea party to celebrate but unfortunately I was unable to attend.  I'm back home in the UK because my father is in hospital and his future care is again under debate.

So instead I decided it was time I posted about the afternoon tea I held for a friend's birthday just a couple of months ago.  That was in France too.

I used my three tier glass cake stand which I acquired at a brocante a couple of years ago for just 2€.  It matches some dessert plates and a regular one tier cake stand that were also collected for next to nothing from brocantes over the years.  My best white tablecloth doesn't come out very often but with that and real cups and saucers the table looked the business, even if I say so myself! 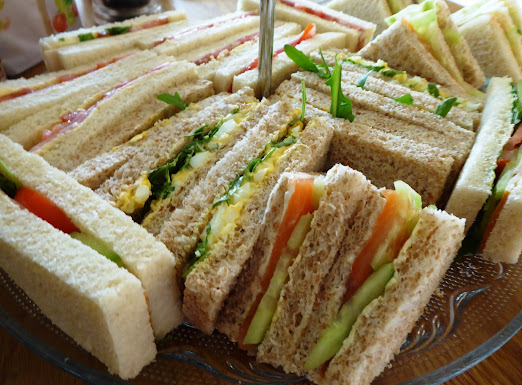 The bottom layer was a selection of sandwiches with the crusts cut off (of course!).  There were home made egg mayonnaise and rocket on brown bread, smoked salmon, cream cheese and cucumber on brown and smoked ham with tomato and cucumber on white.

You can see the recipe for egg mayonnaise here.  I have never seen cress for sale in France so opted for rocket instead.  It was a good substitute.

Being in France, the sliced bread available is not quite like in the UK.  Generally the texture is nice but it always seems to me to be slightly sweet.  We toyed with the idea of making our own bread but as it was only a few days after we had arrived and we were still dealing with all the usual problems of being away from the house for so long decided it was a step too far. 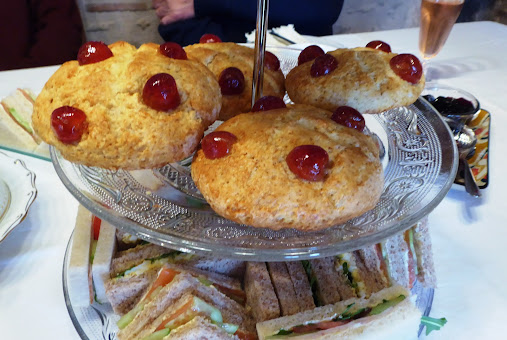 The middle layer was Victoria scones.  For such an important occasion I didn't trust myself to make ordinary scones, my success with those being variable.  The Victoria scones are easy to make from the Be-Ro book recipe and for me they work every time.  They looked cute on the stand although someone who saw the pictures on Facebook said they looked like fat rascals! 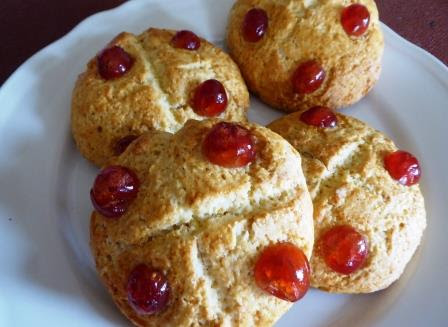 I can't say I've ever eaten a fat rascal so wouldn't know but they sound like fun so will add them to my ever lengthening bucket list of thing to bake!  You can see the recipe for Victoria scones here or look it up in the Be-Ro book - it's in all the recent editions. 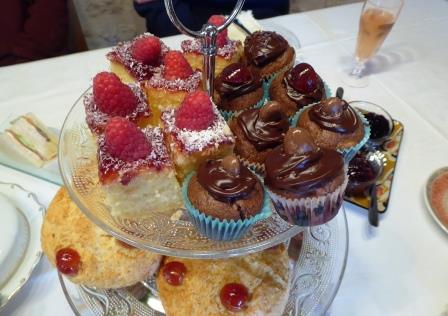 The top layer, the crowning glory, was of small cakes.  The raspberry sponges were cut from a traybake recipe for a jam and coconut sponge, otherwise known as "school cake" and which I have been hankering after making for some time!  I used a recipe on the Asda website which you can see here.  It is very quick and easy and the little squares looked very pretty when topped with fresh raspberries.  You can also see the recipe here.
The little chocolate cakes were to a recipe from one of the collection of slim volumes that Delia Smith put out many years ago called "Baking".  They are chocolate, prune and Armagnac mini muffins and I topped them with an excellent chocolate icing from Lynn Hill's website Traditional Home Baking.  You can see the icing recipe here and I added a few decorations including halved glacé cherries, halved chocolate covered raisins and choclate vermicelli.  They were delicious! 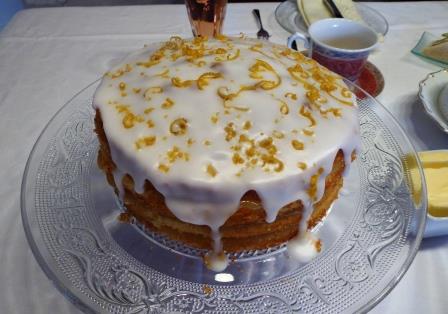 No afternoon tea would be complete without an actual slice of cake so for that I made a lemon layer cake filled with lemon curd to another Delia recipe from the same book.  You can see that here.  I didn't make my own lemon curd but used a Bon Maman jar which I brought over from the UK.  Bizarrely you can buy lemon curd in France but not the Bon Maman one!
I had never made this cake before but had eaten it several times as it's a family favourite of Nick's sisters.  It was easy to make and, of course, yummy! 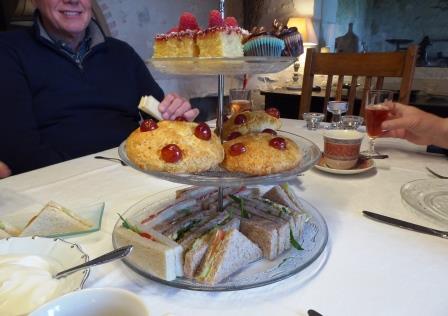 Our birthday guests enjoyed the afternoon tea and so did we.  Being Americans they had only ever had afternoon tea a couple of times before when in London.  It was fun to make and fun to eat.  It does involve a lot of preparation and baking with all the different elements but it's well worth the effort.
I shall be posting about the cake elements separately and will include the links in this post.