ROASTED COD WITH POTATOES AND TOMATOES 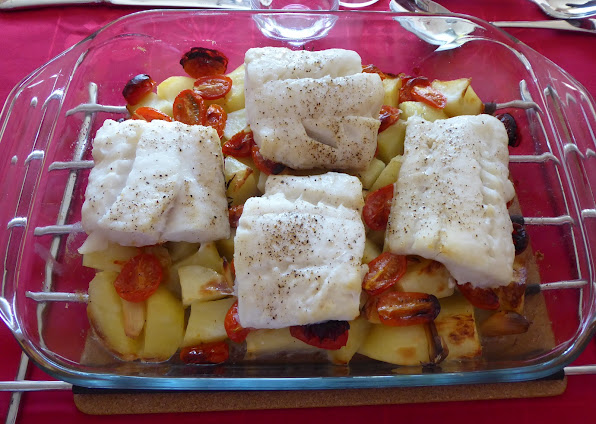 The first time we had this dish it was served to us by friends at least twenty years ago.  The lady of the house (who does all their cooking)  (he does all the ironing)  gave me the recipe.  She actually photocopied the page from the recipe book that it came from, which included notes in pencil on how she had tweaked it.
For quite a few years I cooked it regularly.  It's a great dish to serve to friends and family and also easy to scale down for dinner for two.  Then, I totally forgot about it and I didn't make it all for years.  In fact if I had remembered it I would have had no idea what became of the recipe.
Until last month when we were ferreting about in the loft for the Christmas decorations.  Not that we have an actual loft, living in a dormer bungalow, it's just a triangular shaped space under the roof running the length of the house.  We've still managed to cram it with plenty of STUFF.
Crouching awkwardly in the tiny space Nick passed me a box of stuff that wasn't Christmas decorations but long lost paperwork.  Including my ring binder full of much loved saved recipes from magazines, friends and internet.  I spent a happy half hour browsing through the folder and my eyes fell upon this long forgotten recipe.  I couldn't wait to make it again. 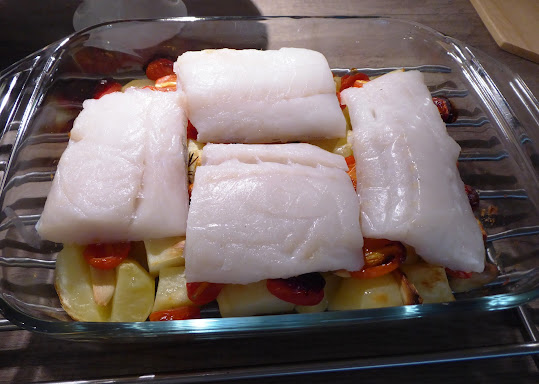 The recipe originates from an old Ainsley Harriot cook book but I don't remember which one.  It's called "French style roasted cod" and is basically cod fillets baked on top of a layer of roasted potatoes. 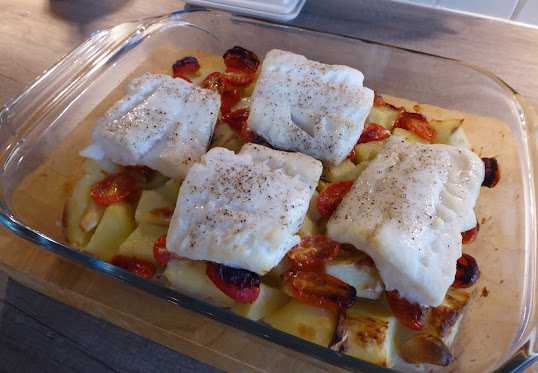 I remembered that it was a good idea to make sure the potatoes were completely cooked before adding the cod as it would be easy to overcook the fish, which takes hardly any time at all.  You end up with succulent fish, lovely garlicky potatoes and tangy, herby tomatoes.
It was totally delicious, just as I remembered it.  The instructions written in pencil by my friend on the recipe said "serve with green beans" - very French and oh-la-la!  We had ours with broccoli and carrots! 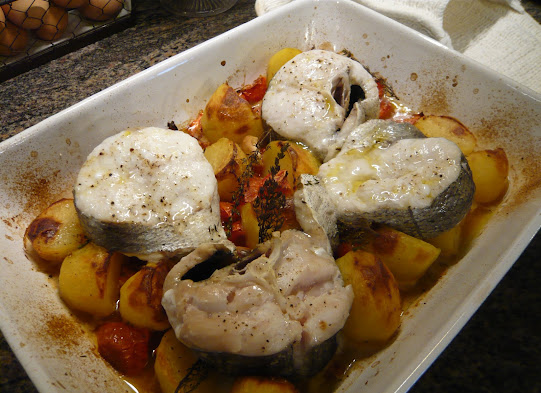 Looking back through some of my photos pre-edited in the folder marked "blog" I found this one.  A bit of detective work showed that I made this dish in December 2014 using hake fillets instead of cod.  That would have been in my French kitchen, suggesting that the elusive ring binder of recipes must have gone with us to France and since been repatriated, only to end up forgotten in the loft!  Zut alors!
Ingredients
450g floury potatoes* or enough to cover your dish in a single layer when peeled and cut into medium sized chunks.   (I used Maris Piper)
1 bulb garlic
a handful of large cherry tomatoes, halved
4 sprigs rosemary
3 tblsp olive oil
4 thick boneless cod fillets (or suitable white fish)
4 tblsp dry white wine
Method
Preheat the oven to 220C / 200 fan / gas mk 7.
Cook the chunks of potato in a pan of boiling salted water until just tender.  Drain and tip into an ovenproof baking dish.
Tuck the cloves from the bulb of garlic in between the potatoes (I peeled mine as I wasn't sure our guests would like them unpeeled).  Scatter the tomatoes over the top and add the rosemary.  Season with salt and pepper and drizzle over 2 tablespoons of the olive oil.
Roast in the oven for 25 minutes until the potatoes are turning golden brown.
Remove from the oven and place the cod fillets on top of the potatoes.  Drizzle with the remaining 1 tablespoon of olive oil and roast for another 5 minutes.
Remove from the oven and splash over the wine.  Roast for a further 7 minutes until the fish is just cooked and tender.  Check after 5 minutes to avoid over cooking the fish.
Serve immediately with green veg of your choice.
* the hake version shown in the last picture was made in France where I have yet to find floury potatoes.  They mostly seem to be waxy ones with a deeper, creamy colour.  It looks like that time I made it with the small, salad potatoes that we often buy in France, halved.
Serves 4.
~~~~~~~~~~~~~~~~~~~~~~ 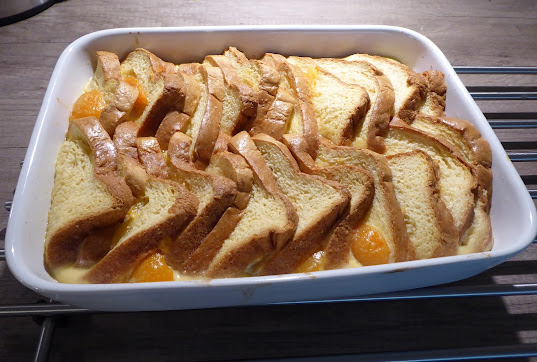 For dessert we had this.  Apricot brioche pudding, another dish I hadn't done for years.  You can read about it here.  This time I tucked some small nuggets of marzipan in with the apricots.  Yum!