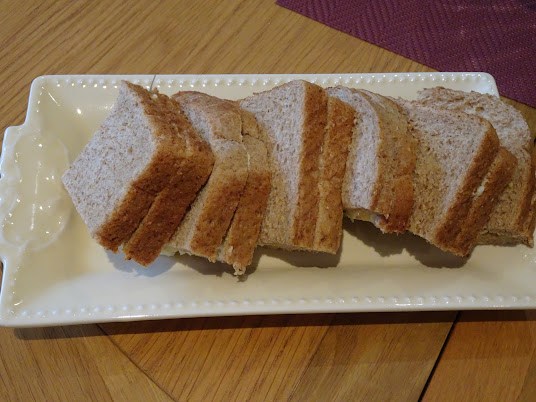 Egg and cress sandwiches on brown bread.
I hadn't had a home made egg sandwich for years until we attended one of the get-togethers in France organised by our friend and fellow blogger Susan.  She had formed an association called Claise Connexion where residents of many nationalities (mostly English and French) from the area around the Claise valley meet up socially every so often.  Everyone is invited to bring either a plate of finger food or something to drink.  You can read about one of the events if you go here.
At these events I have eaten some wonderful home made delicacies, French and English, also Dutch, Australian and American.  For the one I last attended I took a pile of my home made mini sausage rolls which were very popular.  To see the recipe for them go here.  Our friends Tim and Pauline turned up with a big tray of egg and cress sandwiches.  Their hens were laying well and they had lots of gorgeous free range eggs so they rustled up the delicious sandwiches, using French sliced brown bread.  They went down a storm and disappeared fast.  I had completely forgotten how yummy a plain old egg sandwich can be!
Since then I have been periodically buying cartons of egg mayo for sandwiches but they do vary in quality depending on where you buy them.  With a zoom birthday tea party coming up and a glut of eggs in the house I decided to make some myself.  How hard can it be? 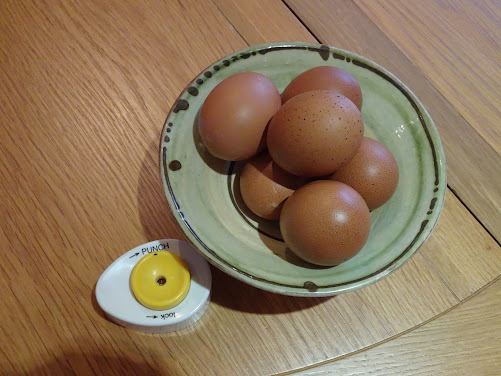 To make egg mayo you need hard boiled eggs.  I always prick mine with an egg punch. 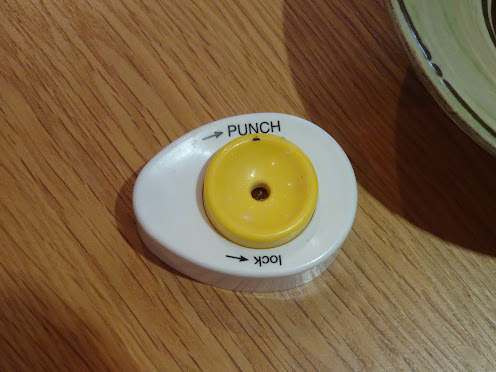 I once read somewhere that the eggs are less likely to crack and leak the white into the boiling water if you have them at room temperature and prick the shell at the rounded end to release the air.  This little egg punch produces a nice little pinhole in the egg without risk of breaking it.  You turn it to the "punch" position, push the egg firmly onto the middle and the spring mechanism pushes the disc down leaving the spike sticking up to pierce the egg.  In the locked position the spring is fixed to avoid accidents where you might accidentally prick your finger.  Of course, if you forget to unlock the punch you just smash the egg and yes, I have done that a time or two!  But I have had no cracked boiled eggs where most of the white ends up floating around in the water. 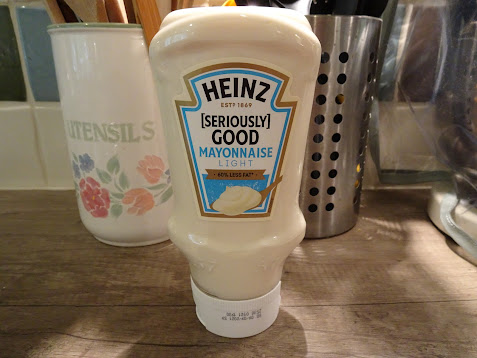 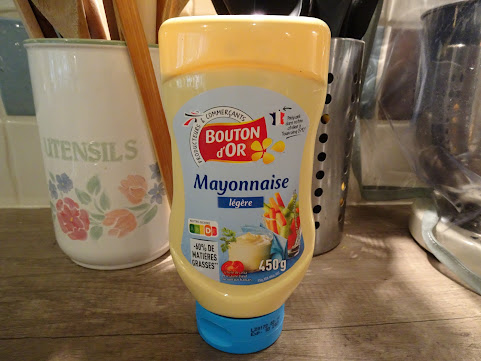 Another essential ingredient of egg mayo is obviously the mayo.  I also like a bit of mustard in mine and this brings me to the difference between French and English mayo.
I always thought that once I'd retired I'd have the time to make my own mayonnaise but the reality is that it's still way down my list of priorities!  So we buy it from the supermarket and have found a difference between the French and English stuff.  Both list "mustard seeds" in the ingredients but, having performed a taste test, I can report that the mustard flavour is much more subtle in the English version and quite noticeable in the French one.  So, if you make your egg mayo with French mayo you may not need to add any mustard at all. 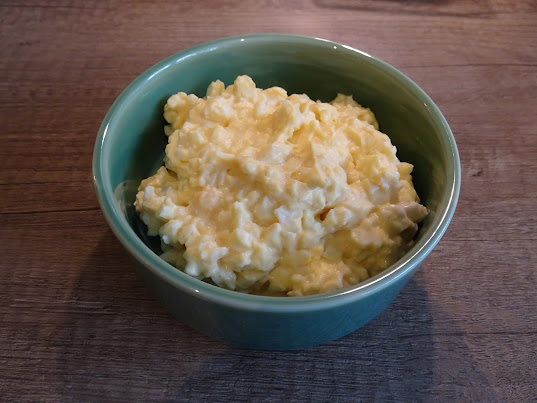 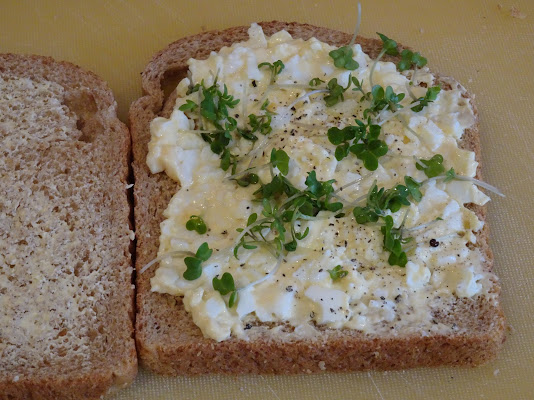 So there we have it, a dish of the most yummy home made egg mayo and the makings of a delicious egg and cress sandwich.
Ingredients
2 large or 3 medium eggs, preferably free range, at room temperature
2 dessert spoons of mayonnaise
½ - 1 tsp Dijon mustard to taste
salt and white pepper
cress, rocket or lamb's lettuce, or other herbs of your choice
your favourite sliced bread, buttered with your favourite spread
Method
Prick the eggs at the round end and drop gently into boiling water.  Boil for 10 minutes.  As soon as the time is up, drain them and refill the saucepan with cold water to cool the eggs.
When the eggs are more or less cold, shell them and place in a small bowl.  Using either a knife or a fork, chop or mash them until there are very few large lumps of white left.
Add one spoonful of the mayonnaise and mix well.  Add enough extra mayo to get the consistency that you like.
Add the mustard ½ tsp at a time, mix well and taste.  Season with salt and pepper and taste again.  Spread it as thickly as you like on your bread, season with extra black pepper if you like and add some greenery, something peppery if that's what you like.
Makes enough for three rounds (six slices) of sandwiches.  Keeps for a couple of days in the fridge.