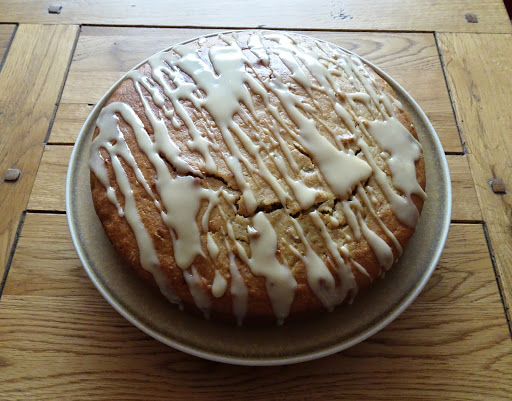 This is another of those recipes I've had my eye on for a while.
Yes, it's another banana cake recipe.  The banana loaf seems to have become something of a cliché for lockdown baking (allegedly) but this one is a bit different. 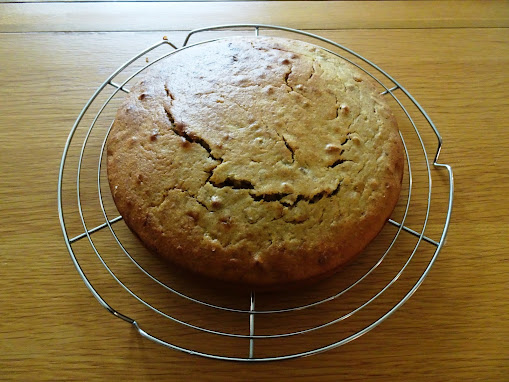 Firstly, it is actually a cake and not a loaf, i.e. it's round, not an oblong shape. 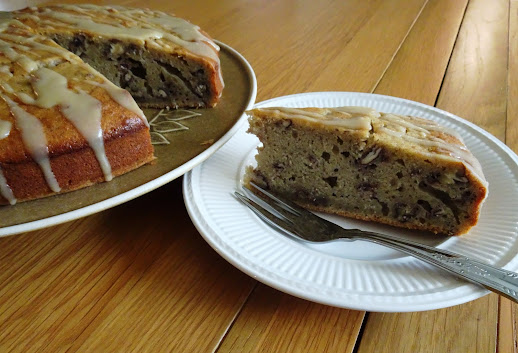 Secondly, it contains a lot of bananas and they are blended into a purée before adding to the mixture, not mashed.
I wasn't sure how much difference this would make to the finished cake compared to other banana cakes and the answer was - not very much!  It did have a lovely texture with that unique slight boingyness that banana cakes always seem to have.
In order to make it I had to wait until I had the right number of very ripe bananas in the house and I actually went out and bought (well, put some on my click and collect order) some pecan nuts just for this cake.  Usually I substitute walnuts for pecans in cakes, mainly because we always have a plenty of windfall walnuts brought back from France.  Luckily I had some maple syrup in stock as well as some cream. 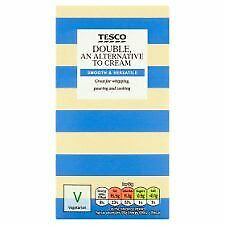 A friend gave me a tip about this stuff a few years ago.  It's long life "double cream" and whips up really well for cakes and desserts.  I struggle with getting a good whip using French cream so we usually take some of this to France with us.  It's long life, easy to pack and store, tastes good, whips up well and the unused cream keeps for several days in the fridge once opened.  I now keep a couple of packs in stock all the time which means there is always cream available when I fancy using it.  However, with Brexit now a grim reality, I expect that taking some to France is a thing of the past because it's dairy. 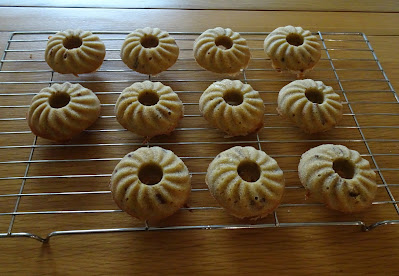 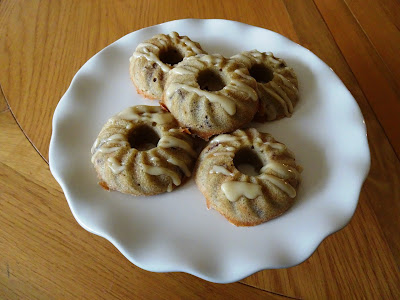 As I was making the cake it occurred to me that there was going to be an awful lot of mixture.  I considered using one of my Bundt tins instead of the 9" round tin specified in the recipe but then remembered my rash "lockdown shopping" bargain of last year.  A mini Bundt tin from Lakeland.  It's a very pretty tin and I used some of the mixture for that.  It produces very pretty little buns!   Mind you, the tin is the devil itself to fill with mixture.  It was very fiddly to get it evenly distributed in its little holes just with a spoon and it looks like my next "lockdown shopping" purchase, if I'm ever going to use the tin again, will have to be a plain, fat piping nozzle!
As it turned out, the cake didn't rise by a huge amount so putting all of the mixture in the tin would have been fine.  On the other hand, it was nice to have a few little buns as well! 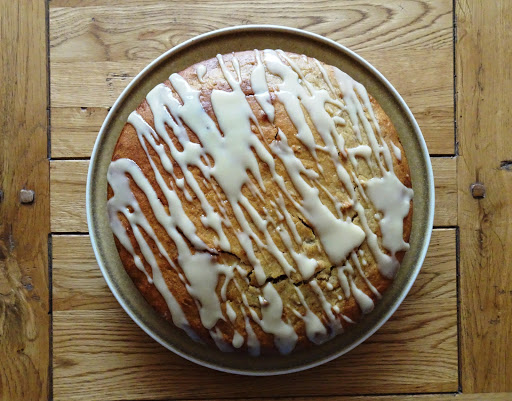 It was a delicious cake.
I'm glad I went to the trouble of buying the pecans because the whole thing was just right.  It would not have been quite the same with walnuts, much as I love them, pecans do have a more mellow, slightly caramel flavour that suited the maple syrup and the cream in the icing.  It's a great cake, only what you would expect from the dishy James Martin!
I didn't deviate from the recipe (apart from the buns) and you can see it on the BBC Food website if you look here.  (I also completely forgot to scatter pecan nuts over the top of the cake because on the website this instruction is missing from the recipe although it's quite clear in the picture - oops!)
Ingredients
For the cake
200g softened butter (I used Sainsbury's Buttersoft)
400g plain flour
4 ripe bananas, peeled
75ml maple syrup
25-50ml milk
150g caster sugar
4 eggs
2 tsp baking powder
75g chopped pecan nuts
For the glaze
125ml maple syrup
200ml double cream
25g chopped pecan nuts (optional)
Method
Grease and line the base of a 23cm, 9" round springform tin with baking paper.  Set the oven to 170°C / 150° fan / gas mk3.
Put the peeled bananas into a food processor and blend until roughly chopped.  Add the maple syrup and blend again, adding enough of the milk to make a smooth paste.
In a large bowl or food mixer, cream together the butter and sugar until light and fluffy.  Beat in the eggs one at a time with a spoonful of the flour.
Add all the other cake ingredients and fold together until well combined.  Spoon the mixture into the tin, level the top and tap on the worktop a few times to settle the mixture and dispel any air bubbles.
Bake for 45-60 minutes until done (mine was done in 45 minutes).  Cool in the tin for 10 minutes before turning out onto a wire rack to cool completely.
To make the glaze, put the cream and maple syrup into a small saucepan and bring to the boil.  Boil gently for 3-5 minutes until the mixture has thickened slightly then set aside to cool.
When the cake and the glaze are cool, drizzle the glaze artistically over the cake, allowing it to drip down the sides.  Scatter over the chopped pecans.  Allow the glaze to set for 10 minutes before serving.
Cuts into 8-10 good slices.