APPLE CAKE and the case of the wrong tin. 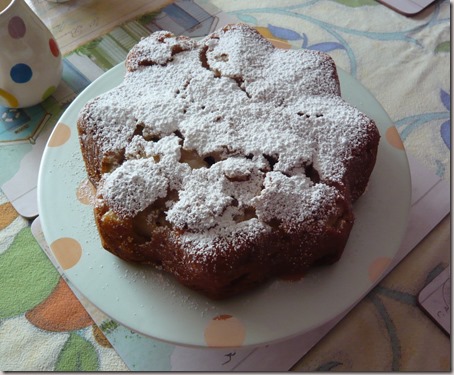 A bit of an ugly duckling.

I would have to agree that this is not the most good looking cake I have included in the blog, but I plead mitigating circumstances.

In early September we moved house and only three days later fled back to France to enjoy what was left of the nice weather.  Three weeks after that we returned to the UK to begin organising the process of doing up our new house, which is a 1960’s bungalow in dire need of modernisation and a bit of TLC.  The kitchen is probably not very old and although it looked good in the agent’s photos in reality it most definitely is not, being cheap and badly fitted. 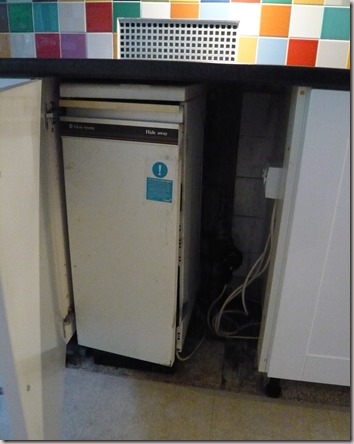 The boiler was so old that the plumber laughed and took pictures to show his mates.  The first job was to replace it and all the radiators, which ended up being a major upheaval and the plumbing equivalent of a re-wiring.  This has left us with a workable but not very pretty kitchen which is difficult to keep clean. 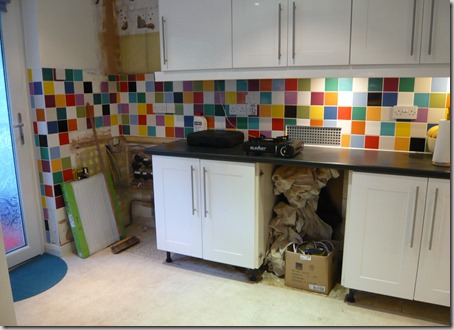 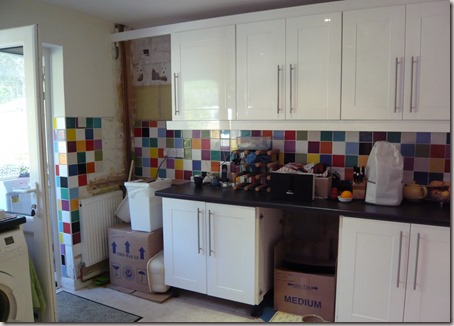 It does at least function, although I miss my dishwasher and have renewed respect for my mum who cooked for four of us and washed up by hand every single day.  I now have the sandpaper hands that she had at my age.  A new dishwasher will come with a new kitchen in late November – not a moment too soon! 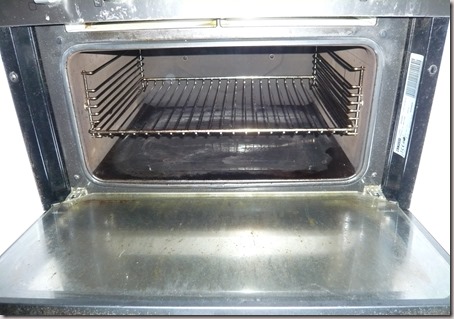 The top oven, untouched and not as clean as it looks.  Ugh. 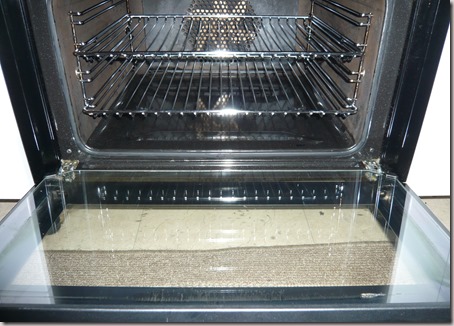 The oven, bright and sparkling without its layers of grease.

The double oven/grill was filthy.  I don’t mind too much cleaning layers of my own muck off an oven, given the right products, but cleaning other people’s is a step too far.  Yes, that is a layer of grease in the bottom of the grill compartment.  I was all for leaving it exactly as it was and using just the hob and our camping stove until our new kitchen was installed, but after a week or so I realised that I could not survive without an oven for at least two months so decided to tackle it.

I used a product called “Oven Mate” which is a fairly evil and vicious gel that you paint on the cold oven surfaces and shelves and wipe off three hours later.  It did a fantastic job of cleaning the oven but I’m afraid I chickened out of doing the top oven/grill.  Whilst it pains me to leave it like that – it’s like having an ogre lurking in the kitchen, waiting to bite me if I accidentally open the wrong door – I simply can’t bear the prospect of cleaning it. 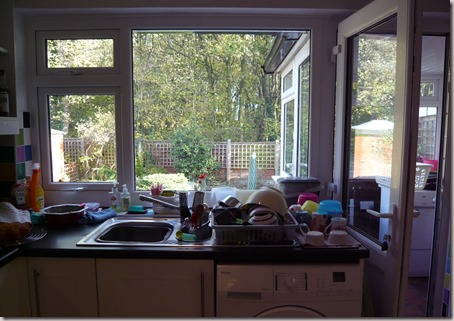 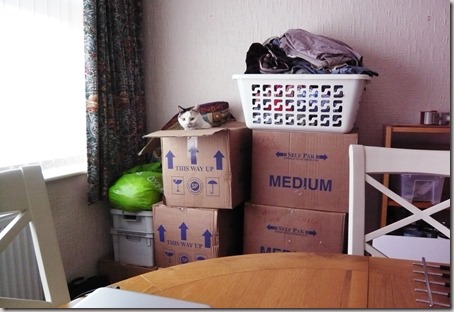 Because we are waiting for a new kitchen most of our kitchen stuff is still in boxes piled up in the dining room.  There seems little point in unpacking it all and putting it away only to have to empty the cupboards again in a few weeks’ time.

Just to digress slightly, I am thrilled to have a dining room, having not had one since living in the old Edwardian flat I rented in Headingley, Leeds, in 1971.  That had a proper dining room, with parquet floor, picture rails and a fine fireplace.  After that I had either a “through lounge” arrangement or a dining kitchen.  This new dining room would originally have been the front bedroom until the upstairs was added to the bungalow, but it’s a good size and we have great plans for it. 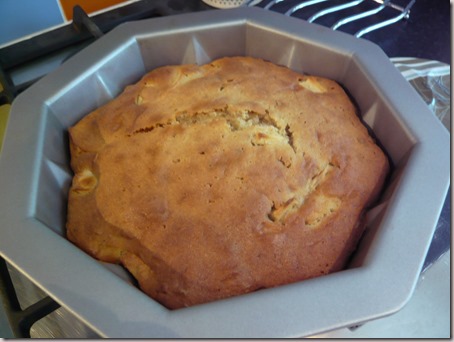 And so I come to the reason for having a rather untidy looking cake.  It was my dad’s and Nick’s birthdays on consecutive days and a cake of some sort was called for.  After weeks of rummaging through packing boxes to find essential items, I was fed up with the chaos and on opening a box marked “cake tins”  picked up the first tin I found inside and thought it would do fine for the apple cake recipe.  If I had used a regular tin it would have been fine, as you can see, but with this tin the cake is meant to be turned upside down to reveal the fancy shape on top and that’s where things went pear shaped. 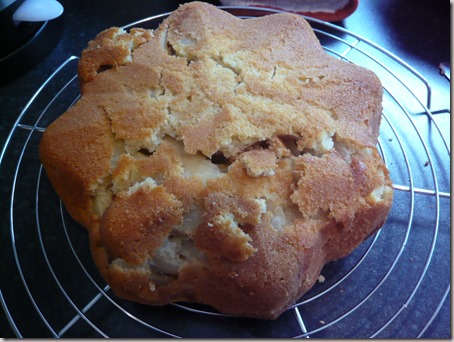 I possibly could have turned it back the other way up but thought there was a risk that it might fall apart completely so decided to slather it in a good sprinkling of icing sugar instead. 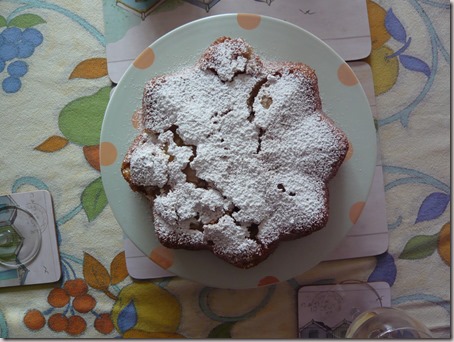 As well as not using the right tin, I also didn’t use the right ingredients.  The recipe called for almond essence but I had no idea where mine might be.  In rummaging I spotted the jar of mixed spice so used that instead along with the zest of an orange, which I had seen in another recipe and sounded like a nice idea.

It was delicious.  Definitely my favourite apple cake so far.  The original recipe comes from Jo Wheatley, a GBBO winner of a few years ago and is called “Auntie Helen’s Apple Cake”.  You can see it here. 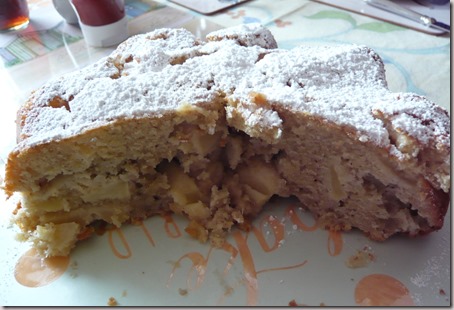 It was packed full of apples and I thought the spice and orange variation worked really well.  Next time I might use one less apple (maybe mine were a little too big) to make the cake more stable but it was lovely.  Definitely one to do again – but using the right tin next time! 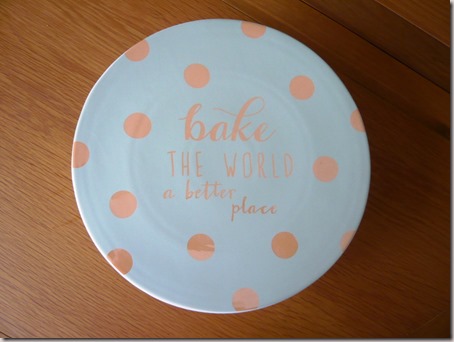 Digressing ever so slightly again, I served it on my new cake stand which was a bargain purchase recently from Tesco.  I have a huge collection of cake stands (I simply dare not confess exactly how many but suffice it to say more than any person can ever need) and really didn’t need another.  However, I liked the slogan on this one, things in the world being so wrong at the moment, so when they were reduced eventually to £3, I swooped.

4 small eating apples, peeled and sliced (I would use three next time)

Cream together the fat and sugar using an electric whisk, until light and fluffy.  Beat in the eggs one at a time.

Sift and fold in the flour and spice, along with the orange zest and cream.

Stir through the apple slices until well coated in the batter.  Transfer to the tin and bake for 40-50 minutes until golden brown and done.

Cool in the tin for a few minutes then turn out onto a wire rack to cool.  Sprinkle liberally with icing sugar and serve warm with cream or ice cream, or cold.