STICKY TOFFEE LOAF CAKE and a good reason for not baking. 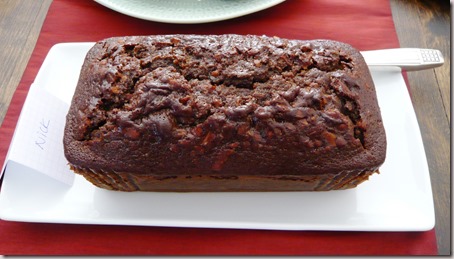 Nick made this cake for the last CCC meeting.  I had made it myself (and blogged about it) a while ago and when I looked it up it turns out that that was three years ago – how time flies!  I remembered that it was a delicious cake, full of spice and just right for early autumn, with its dates and pecans.  You can read about it here. 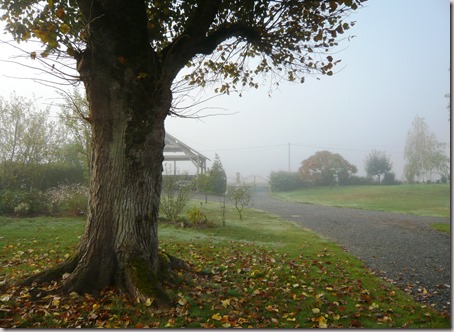 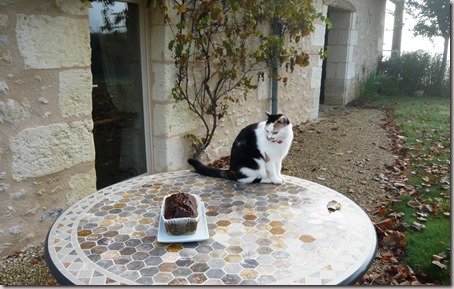 Autumn arrived unusually early in our little corner of France.  Considering that the cake club meeting was on 27th September, looking at the photos you would think that it was a month later.  September is usually a glorious month in the Loire Valley, warm and sunny, with all the joys of summery days without the baking heat of say July and August.  This year September was disappointing, cool and showery.  (Apparently October has been better – but we were not there to enjoy it, sadly.)

It was definitely a “mists and mellow fruitfulness” kind of day when Nick baked his cake and I had to take the cake outside to get enough light to take its picture. 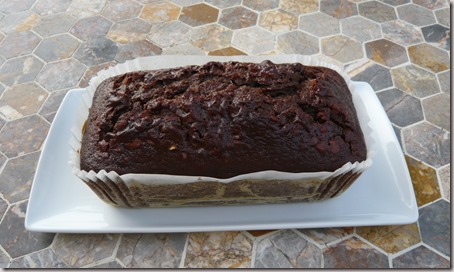 The cake is made to a Delia Smith recipe – Nick is very much a fan of Delia – and rightly so.  I can’t recall having too many failures with any of her recipes.

This time we decided that we liked the rustic look of the cake without its icing so decided not to ice it.  That was a good decision I think.  Sometimes an icing is called for but on this occasion the cake was perfectly delicious without it.  (For those who like the intense sweetness of a sticky toffee pudding, the icing would satisfy the need.)

It kept really well for several days.  Chunks of it sustained us on our long, twelve hour journey back to Derbyshire from the Loire.  The last few pieces kept us going and our spirits up when we faced the first tranche of building work on our new house in the UK.

You can see the original recipe with the iced version here.

110g Flora Buttery (or similar, such as Lurpak Spreadable)

Put the butter, treacle and syrup in a large saucepan over a low heat and melt them together.  (Warming the tin of treacle in a saucepan of hot water will help to make it easier to measure out.)

Remove from the heat and allow to cool slightly, mix in the milk then the beaten eggs.  Sift in the flour, spices and bicarb, whisking in gradually until smooth.  Add the nuts and about two thirds of the dates, mix well and pour into the tin.  Drop the remaining dates onto the top of the cake and push them in a bit with a skewer.

Bake on a low shelf for 1½ hours to 1 hour 50 minutes until done, risen and cracked on the top.  Cool in the tin for 30 minutes then turn out onto a wire rack to cool completely.

Cuts into 10-12 slices, depending on how thick you like you slices of cake.