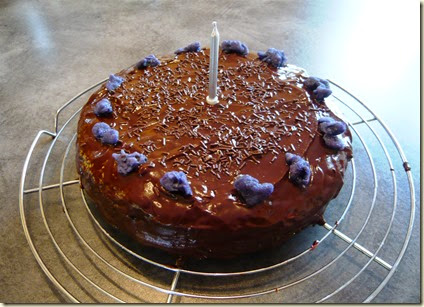 It was our local Clandestine Cake Club’s first birthday recently so I felt compelled to attend the meeting, even though I really haven’t got the time to bake!  (Any excuse!)

A quick shuffle of my last few unpacked cook books led me to a recipe in Mary Berry’s Baking Bible.  Chocolate and booze go well together at any time but are especially good for a birthday! 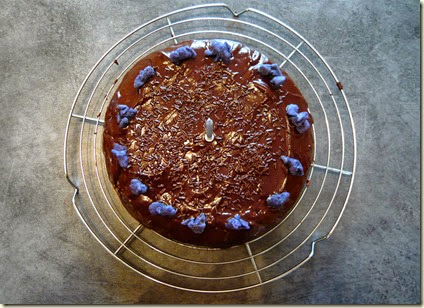 In the first chapter of her book Mary states that she rarely uses dark chocolate with a high cocoa solids content, believing it to be unnecessarily expensive and not always the best thing for baking.  Luckily I had two bars of Cadbury’s Bournville chocolate in the cupboard so with those in stock I had more or less everything I needed to make the cake.

Apart that is, from the apricot jam.  The recipe states that you should brush the cake with warm, sieved apricot jam before coating it with the chocolate icing.  As we are trying to run down our stocks of everything before we move house, the only thing I had in stock that might do was half a jar of morello cherry jam.  As cherries go really well with both rum and chocolate I decided to use that instead and I have to say, it was a really good choice.  The sweetness of the cherry jam contrasted will with the intensely chocolate flavour of the cake and icing. 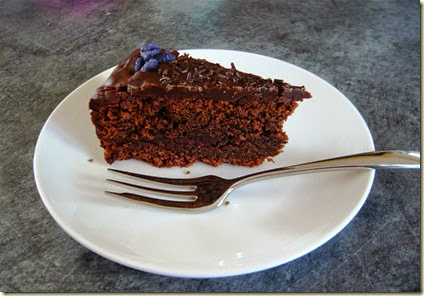 I decorated the cake with the chocolate icing as given in the recipe and also added some crystallised violets, a sprinkle of chocolate vermicelli and a single candle.

This is not a cake for the faint hearted.  There are after all two whole large bars of Bournville chocolate in the cake and even though they’re not the 70% cocoa solids content of some chocolate, it still adds up to a very strong dark chocolate flavour.  One to which the cherry jam adds a welcome contrast.

You can see the recipe here but in the Baking Bible Mary also incredibly adds yet another almost whole bar of chocolate by making a ganache to pipe decorative swirls on the cake !!  It was already more than chocolatey enough for me so this would have made it inedible for my taste !!  Needless to say, I’m glad I omitted that step in the recipe.

Adding the cherry jam was a lucky alteration to the original recipe so consequently I feel entitled to submit this post to this month’s Tea Time Treats Challenge, organised by Karen of Lavender and Lovage and Jane of the Hedge Combers.  The theme this time is “jam” and you can see the details here.

Melt the chocolate and butter together in a heatproof bowl over a pan of simmering water.  Set aside to cool.

Put the egg yolks and sugar in a large bowl and whisk together until pale and creamy.

Add the cooled chocolate and rum and mix together until combined.  Sift in the flour and fold in, along with the ground almonds.

Whisk the egg whites separately until stiff and fold into the mixture.

Transfer the mixture to the tin and bake for about 45 minutes until done.

Leave to cool in the tin for a few minutes then turn out, remove the paper and cool on a rack.

To make the filling, melt the chocolate as above, then add the butter and mix well together.  Put the jam in a small saucepan and heat gently, then push through a sieve to remove any lumps of fruit.

When the cake is cool, slice it in half horizontally using a bread knife.  Spread two tablespoons of the chocolate icing on the bottom half and put the two halves back together.

Brush the sieved jam over the top and sides of the cake and allow to set.  Then gently spread the remaining icing over the whole cake.  Decorate with sprinkles, candles or your choice of decorations.