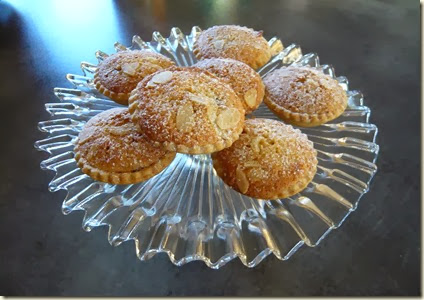 If you are one of those people who can’t stand the sight of another mince pie by the time New Year’s Eve is nearly upon us, then read no further.  If, on the other hand, mince pies are high on your list of favourite things about Christmas, read on.

My mum used to make dozens of mince pies in the week before Christmas and we consumed them gratefully.  In fact they were so popular with our family that my dad had a mince pie in his packed lunch most days in most months of the year.

Sadly, Nick is not too keen on them so I rarely make more than a dozen myself, but this year I decided to try a different recipe.  There are plenty of recipes for frangipane mince pies and the good thing about them is that you get less pastry and a nice light almond sponge topping instead.  I chose a recipe in “Mary Berry’s Christmas Collection” and modified it slightly to include elements that I also fancied from other recipes. 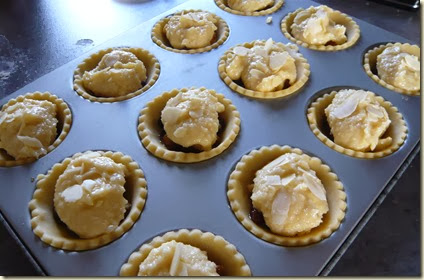 I added some chopped apple and orange zest to the mincemeat along with a good measure of brandy. 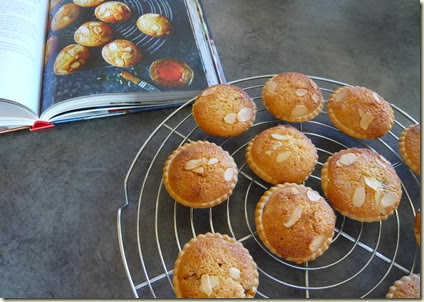 It’s always a relief when the end result looks like the picture in the book and these mince pies really were a picture!  Instead of glazing them with apricot jam as per the recipe I dusted them with icing sugar in the usual way.  I thought the jam would make them sticky and difficult to store or pack in boxes to give away. 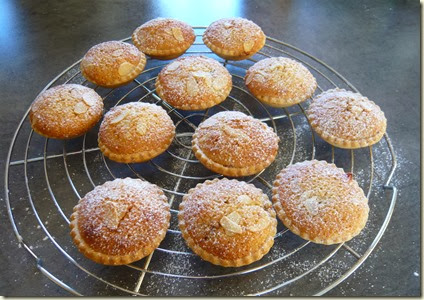 They were a hit with everyone, including Nick, who liked them enough to suggest I bake another batch now that the first lot have all gone.  Success !!

You can find Mary Berry’s original recipe in several places including here, but this is my version of them:

For the mincemeat filling:

For the frangipane topping:

100g spreadable butter such as Lurpak

a few flaked almonds for sprinkling

Make the pastry in a food processor in the usual way, cover in cling film and chill in the fridge while you make the topping etc.

Spoon the mincemeat into a small bowl and combine with the apple, orange zest and brandy.

To make the frangipane topping, put the butter and sugar into the (unwashed) food processor and process until light and creamy.  Add the eggs and process again.  Finally add the ground almonds, flour and essence and mix briefly to combine.

Roll out the pastry thinly and cut into circles to line the tins, re-rolling scraps of pastry to use it all up.  A 6½ cm cutter worked best for my tins.  Add a level tsp of mincemeat to each circle, resisting the temptation to put too much in each one, because if you do it will definitely boil over!  Spoon a dessertspoon of almond mixture on top of each tart.

Sprinkle a few almond flakes on each tart and bake for 15-20 minutes until golden and springy.  Cool on a wire rack and dust with icing sugar.