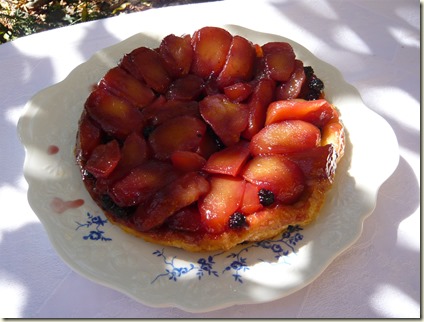 The weather here in France has been glorious for the three weeks that we have been here.  Apart from the occasional shower last week we have had clear blue skies and sunshine nearly every day, which is such a joy considering that every one of our previous holidays last year and earlier this year have been quite cold and wet.  It reminds us why we bought our little holiday home in France in the first place !!

Anyway, one of the things I love about our holiday in August is being able to get blackberries from the hedgerows around the château.  They have been late in ripening but now they are plentiful.  They are small and not very juicy but full of flavour, so different from the large, almost tasteless ones sold in supermarkets back home.  They are also almost entirely free from grubs too.

The other day we gathered nearly two pounds of beautiful blackberries so I decided to make some of them into a blackberry and apple tarte tatin. 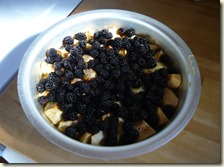 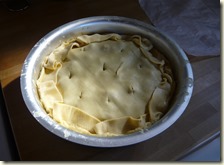 I used the Raymond Blanc recipe that works every time as I personally prefer my tarte tatin not overly caramelised or bitter.  I wrote about it here.  You can also find it on the BBC website here.

This time I simply added about 175g of washed blackberries on top of the apples after cooking them in the oven and before putting the pastry on top. 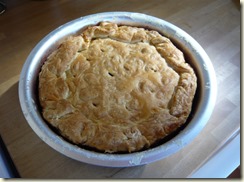 I also followed some advice in a Guardian blog post which you can see here, and allowed the fruit to cool a little before adding the pastry.  I’m not sure how much difference this made but the end result was delicious. 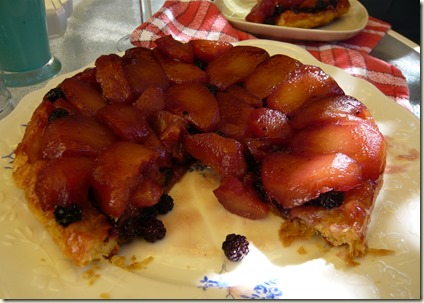 I took ours to lunch with friends where we ate on their little terrace in the sunshine.  I served it with a dish of crème fraîche and cream, whipped together with a little icing sugar.  A perfect dessert for the very end of summer.