TRIFLE AND CAKE – TWO FOR THE PRICE OF ONE !!

When Ruth of the blog Makey-Cakey announced another ingredient swap I signed up immediately.  You can see the invitation here.  I really enjoyed the last one I did – receiving a parcel of mystery ingredients and making something with them was great fun.  (You can read about my first time here.)

This time I was paired with Sally of the blog Recipe Junkie and she sent me this collection of ingredients. 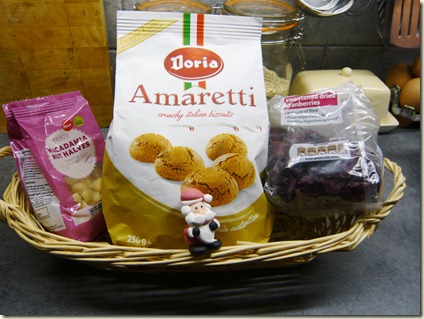 Dried cranberries, macadamia nuts, amaretti biscuits and a Santa Claus.  I have no idea why, but the first thing that came into my mind was trifle !!

I did a bit of research into how I could use cranberries in a trifle and nothing much popped up.  But I did find a reference to a Nigella Lawson trifle that has cherries and amaretti biscuits in it so I based my trifle loosely on that.  It comes from the book “Forever Summer” and you can see the original recipe here.

The first thing I did was to soak my cranberries in something alcoholic – a bottle of rum came out of the booze cupboard first so I thought “why not”.  (In fact rum is what Nigella suggests as an alternative to the limoncello that she uses.)   I put half the cranberries into a jar, covered them with the lovely rum and left them to plump up alcoholically for a day or two. 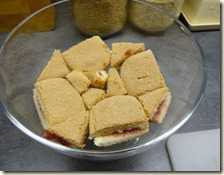 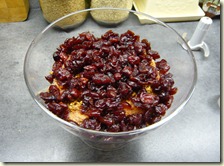 I used bought trifle sponges for the base, splitting them in half and spreading them with cranberry sauce, then sprinkled crushed amaretti biscuits on top.  Instead of making the Italian trifle version using eggs and mascarpone cheese I used a carton of read-made custard and topped it with double cream. 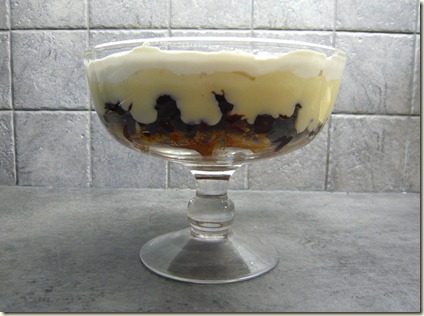 I anguished for some time about the addition of jelly.  Trifle always comes with jelly in my mind but somehow it didn’t seem quite appropriate.  This was going to be a very grown-up trifle, with the tart chewiness of the cranberries and the very adult rum – not your nursery version with raspberries, a splash of sherry and hundreds and thousands – oh no, much more sophisticated than that !!  (Not that there’s anything very sophisticated about bought custard !!)

Anyway, it worked.  The cranberries were chewy and noticeably boozy.  They contrasted well with the sweetness of the cake and custard and the addition of proper thick whipped cream, crushed amaretti biscuits and chopped macadamia nuts to decorate just finished it off perfectly. 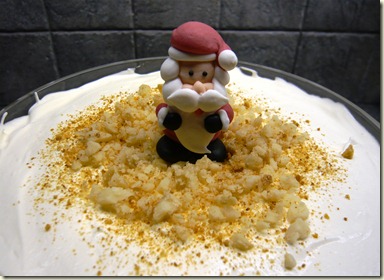 In fact it would be a perfect alternative pudding for Christmas !!

Put 100g of dried cranberries in a jar, cover with rum and press down.  Put the lid on and leave it for a day or two.

Take enough trifle sponges to cover the bottom of your dish, cut them in half horizontally and spread with cranberry sauce, sandwich-fashion.  Sprinkle a layer of crushed amaretti biscuits on top.

Tip the soaked cranberries on top of the cake and add more rum if you think necessary (!) to make sure the sponges are properly soaked.  Pour a carton of ready-made custard on top, spreading out evenly to fill any gaps.

Cover the custard with whipped double cream.  Sprinkle some more crushed amaretti biscuits and some chopped macadamia nuts on top to decorate.  Chill for several hours or even overnight – the longer the better as this always seems to improve a trifle.  Place your Santa Claus in the middle and serve !!  Mine made about six servings.

As it happens, my trifle only needed about half the cranberries and only a few nuts and amaretti biscuits so I had lots left to make into something else.  So I made these: 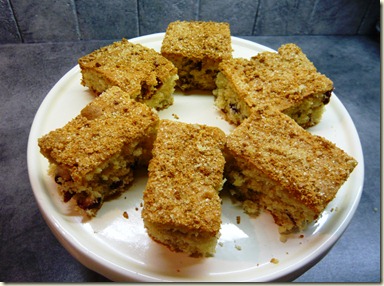 I used the recipe for white chocolate and cherry squares which you can see here.  I simply substituted the cranberries and chopped macadamia nuts for the quantity of chocolate and cherries in the recipe and I also added the rind of one orange.  Then I added some crushed amaretti biscuits to the demerara sugar that was sprinkled on top.

They were yummy and made a nice addition to our table of goodies at our Children in Need cake sale:

More about that later !!