I spotted this recipe in a 2011 copy of Delicious Magazine, which was in a pile of stuff ready for recycling.  Which just goes to prove you should never recycle a magazine until you have looked at every recipe on every page in case there is one you can’t live without. 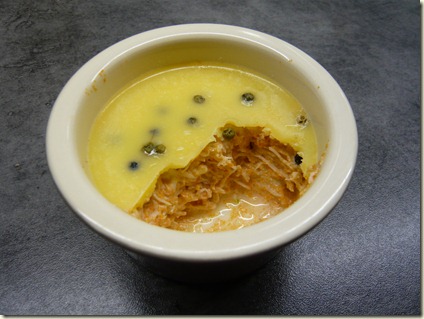 You can see the original recipe here.

As it happens, crabs were half price in Tesco a few weeks ago ~ £2.50 ~ which actually seems like the right price for a small crab to me.  Anyway, I bought one thinking Nick would enjoy bashing the crab out of the shell after a long week at work and we could do something with the crabmeat afterwards.  It was obviously fate as I spotted the recipe that very evening.

We had almost everything we needed in the house already.  Instead of the crème fraiche listed I used Philadelphia Light, which is fast becoming my favourite ingredient for all sorts of things.  It worked brilliantly. 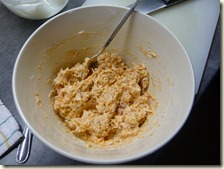 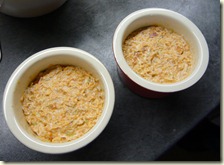 It could hardly be easier to make.  Apart of course, from the process of extracting the crabmeat from the shell.  That’s a messy and fiddly job but very therapeutic for someone who has had a chewy week at work. 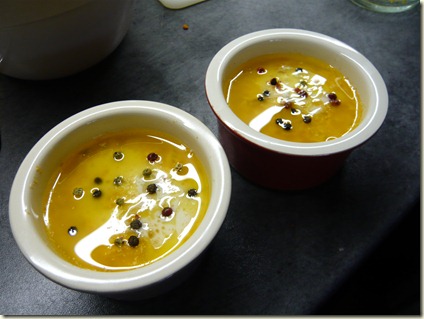 You simply mix all the ingredients together, cover with a layer of melted butter and chill in the fridge until needed. 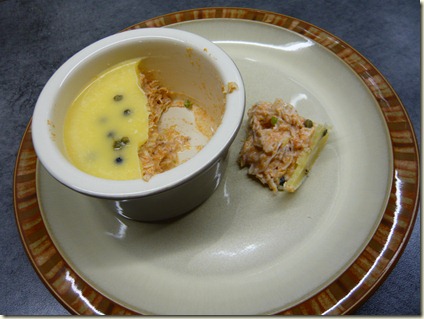 It was quite delicious and would make an impressive starter or a nice light lunch.  Well worth the effort involved and we will certainly be making it again – I say “we” because bashing a crab is obviously a job for the man of the house !!

Finely chop the spring onions and mix with the crabmeat, Philly, horseradish, cayenne and half of the melted butter.

Divide between large or small individual ramekins, depending on how you want to serve the crab.

Chill for at least one hour before serving.  Can be made the day before it is needed.  Or wrap in baking paper and cling film and freeze for up to one month*.  (Thaw overnight in the fridge before serving.)

Serve with toast and lemon wedges or with a small salad as a starter.

This quantity will make 6 very small starters or 4 more substantial ones.  We used 2 larger ramekins and shared each between two people.

*The crabs that are for sale in our local Tesco are previously frozen.