As it was a nice day today, my dad decided he would make his first visit of the year to his model engineering society.  He phoned me up to mention it with just enough time for me to bake him something to take with him !!  Anyone can take a hint when it’s that big !!

That was lucky because I had been trying to think of an excuse to bake something green for this month’s We Should Cocoa Challenge hosted by Chele of Chocolate Teapot– something chocolate and green for St Patrick’s day.  So I decided to make my courgette chocolate cake.  You can’t get much greener than that. 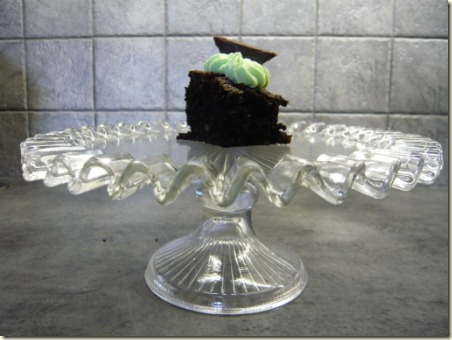 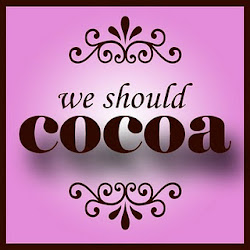 Instead of making a round cake I decided to make a square one and cut it into squares, which is easier for a bloke to dish out to his mates whilst they’re talking steam engines.  It was either that or cupcakes but they seemed a little too …….. airy fairy for the steam engine fraternity. 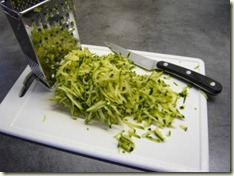 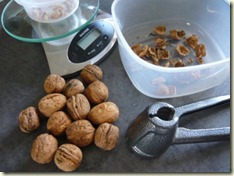 First I grated the courgette then I remembered the walnuts were still in their shells – part of the stash of windfalls we brought back with us from Le Grand-Pressigny last autumn.  Just in case you need to know, it takes roughly 15 walnuts to produce 45g of shelled nuts. 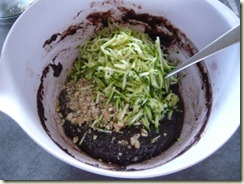 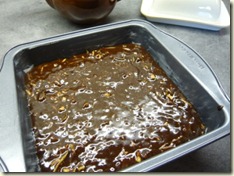 Of course the great thing about this cake is that nobody would ever know there are any courgettes in it if you didn’t tell them.  The mixture goes into the tin with green bits in it but once it’s baked there isn’t a single speck of green to be seen. 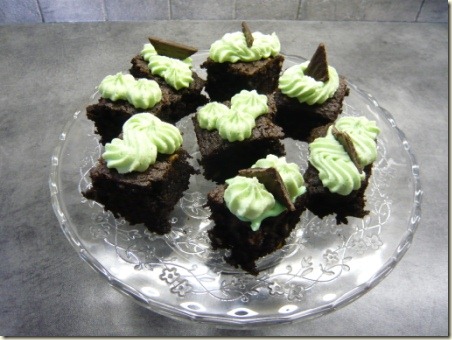 That rather defeated the idea of producing something green.  Hmmmm……

So then I had the idea of icing them with green icing.  I used my standard recipe for white chocolate icing and added enough green colouring to make it look adequately green and plonked a  few triangles of After Eight mints on top just for the sake of it.

(The amazing thing is I have no recollection at all of buying green colouring.  The only other colour I had in stock was yellow and both bottles were unopened.  Huh…..??)

They looked positively bizarre and I was quite proud of them.  My dad raised an eyebrow when I presented him with the tin of cakes to take to the club but it came back empty so you can’t say fairer than that.

The recipe for the cake is here and the icing is made as follows:

Sift in 70g  icing sugar, a spoonful at a time and beat in.

Add a few splashes of green colouring and beat.  Add more colour a few drops at a time until you get the colour you want.

This quantity will decorate 12 cupcakes (or squares).

more of the same baking challenge, chocolate, small cakes, we should cocoa