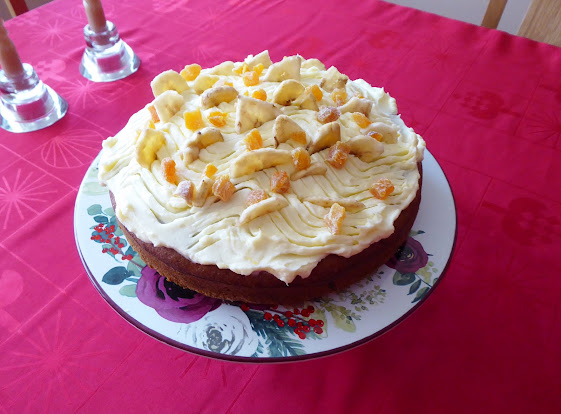 I have been meaning to have a second go at this cake for some time.
You can see the first time I made it and where it was not a success if you read here.  The recipe comes from the Trex website (see here) and I had made the cake as per instructions using Trex.  There were lots of good things about it but I felt it would probably be much better if made with butter. 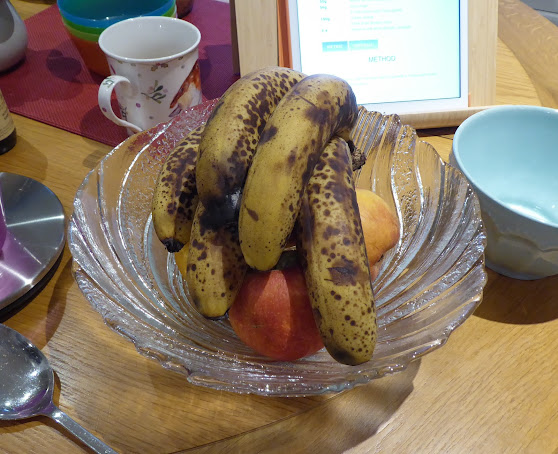 It was when I saw a bunch of bananas reduced to 20p just before Christmas that I thought it was time I had another try at the recipe.  Bargain.  One week later they were just right for baking with! 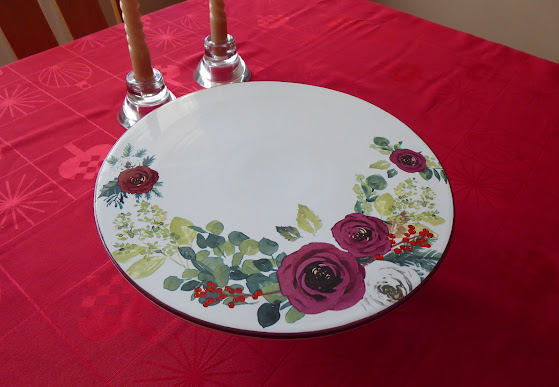 I was also keen to use my new Christmas cake stand.  Also a bargain.
Now I know I have more than enough cake stands already but......this one is so pretty and when it was reduced in price on the Lakeland website I thought one more wouldn't do any harm.  (I have also created a second storage place for my large collection!)  You can see it here but it's back up to full price!
I needed a few other things from Lakeland (don't you always?) so I placed the order paying extra for next day delivery, not holding out too much hope of them actually arriving in time for Christmas.
My luck was in!  The parcel arrived the following evening but........I was hugely disappointed to find that the cake stand was faulty.
"How can that be?" I hear you say.  Well it was wonky.  Wonkiness is a common fault with cake stands.  It only takes the pedestal to be glued slightly off centre on the base of the plate and you end up with a bit of a slope.
I'm not too fussy about a slight slope.  After all, very few of my cakes are actually perfectly level and nobody ever seems to notice a slight wonkiness but this one was miles out.  Well over half an inch across the plate.  (I know this because my other half insisted on getting out his spirit level and measuring it!)
I phoned Lakeland first thing the next morning and spoke to a very nice lady.  I have to say that Lakeland's greeting message is probably the most polite and friendly one I have ever heard.  The lady was very understanding and quick to offer a refund.  When I said what I really wanted was another cake stand she said she would despatch another and to keep the faulty one.  On Christmas Eve my replacement arrived so I hot footed it to the Hospice shop where the wonky original was received gladly.  It was priced and on sale by the time I left the shop.  Hopefully someone who doesn’t mind a cake stand a bit of a slope would have got an even greater bargain for displaying their Christmas cake. 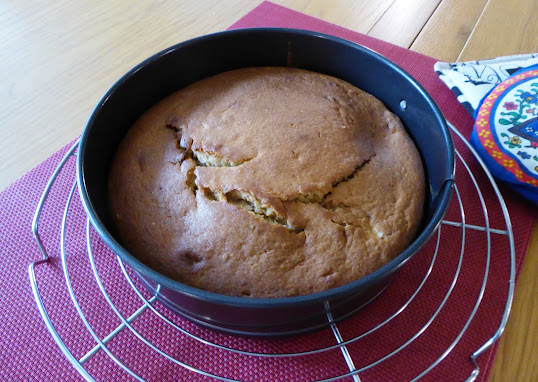 In the end I used Stork block baking margarine not butter.  I also made the whole thing in the food processor.  It had one of those smiley face cracks when it was done. 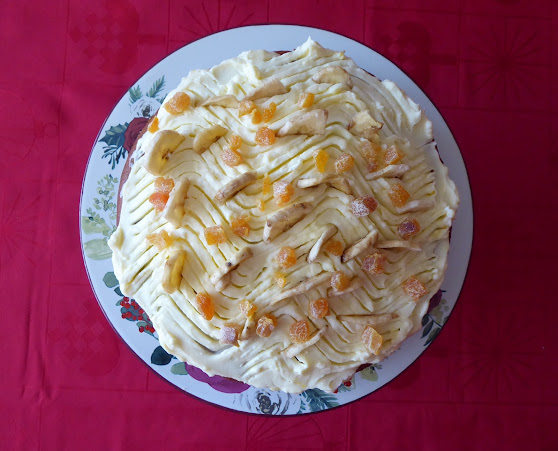 I decorated it with the cream cheese frosting, banana chips snapped in half and chopped apricots as suggested in the recipe. 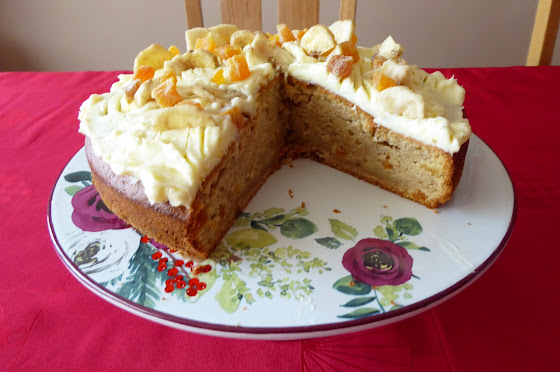 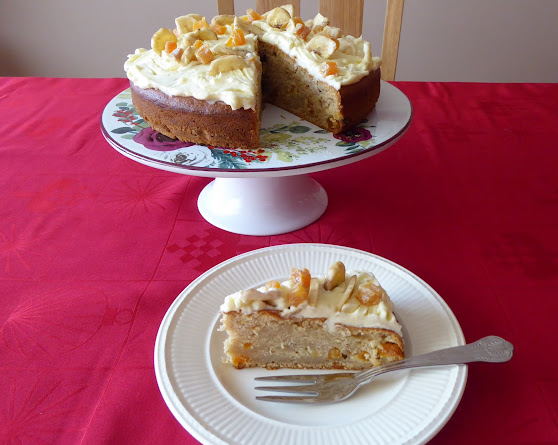 I don't think it rose as much as the last time I made it but it was yummy! 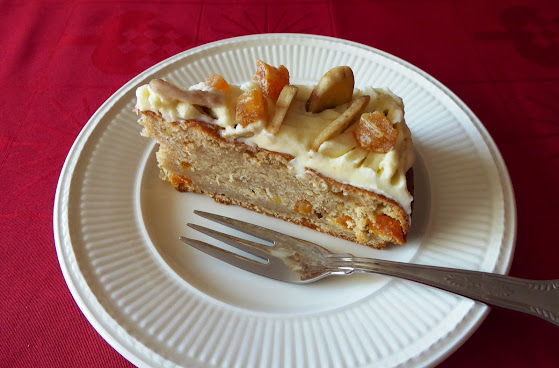 Definitely a cake recipe worth the tweaking!
Ingredients
For the cake
225g self raising flour
a pinch of salt
100g block margarine, chilled and cubed
100g soft light brown sugar
2 large eggs
1 tsp vanilla extract
3 medium very ripe bananas, peeled and mashed
50g chopped dried apricots
1 tblsp milk
For the topping
50g softened butter
50g icing sugar, sifted
zest of ½ a lemon
100g cream cheese
a few dried banana chips and chopped apricots to decorate
Method
Grease and line the base of a 20cm round springform cake tin.  Preheat the oven to 180C / 160 fan / gas mk 4.
Sift the flour and salt into a food processor.  Add the margarine and pulse until fine breadcrumbs appear.  Add the sugar and pulse briefly to combine.
Beat the eggs and vanilla together.  Add to the food processor and process to mix in.  Add the mashed bananas, apricots and milk and process again until mixed together.  Add more milk if the mixture seems a bit stiff.
Transfer to the prepared tin and bake for 50 - 60 minutes until done.  Cool in the tin.
To make the frosting, beat the butter, icing sugar and lemon zest together.  Beat in the cream cheese.
Spread over the top of the cake and decorate with the banana chips and choppe apricots.
Cuts into 8-10 slices.