Something very peculiar happened in the oven the other day. 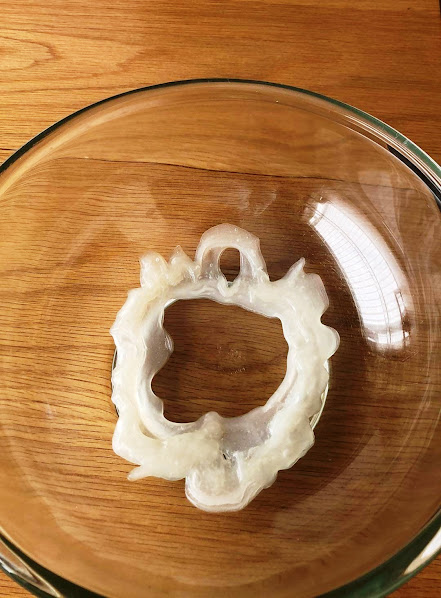 Well truthfully, not my oven but my sister-in-law's.
She uses her forty year old Pyrex mixing bowl every time she bakes and after washing it she normally puts it in the warm oven (turned off after baking) to dry.
One day last week she turned on the oven to a fairly high heat, 190° - 200°C she said, and after a few minutes remembered that the Pyrex bowl was still in there.  She grabbed the oven gloves and pulled the bowl out to find what she said was a kind of gooey, gluey puddle of a clear substance in the bottom of it.
Fearing the worst she dashed outside with the bowl and left it to cool down, thinking that she had had this bowl as a wedding present and would be sad to see the end of it.  A few minutes later, it looked like the picture above. 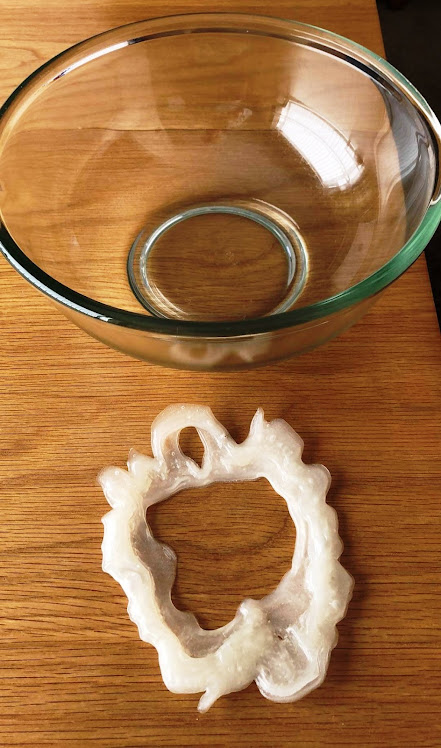 The goo had solidified so she gingerly lifted it out and to her surprise discovered that the bowl, which was very scratched and worn, now appeared to be in immaculate, like new, condition.  The substance she lifted out was a kind of solid ring of something that felt much like plastic.
I'm tempted to buy one of those worn out Pyrex bowls that are for nuppence in the local charity shops and try it myself to see if I can rejuvenate it in the same way.  She says she tried it with her pudding basin but it didn't work because she thinks the oven wasn't hot enough.
I wouldn't recommend trying this at home yourself but any explanations would be welcome !!

more of the same other stuff