APRICOT CLAFOUTIS - things to do with apricots part two and a real bargain. 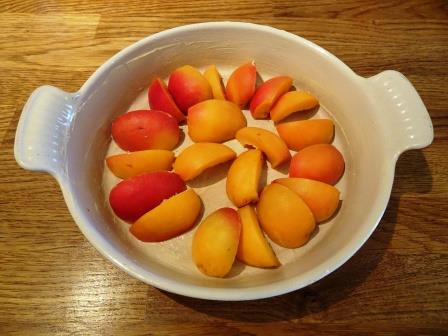 A clafoutis is a very popular dessert in France.  It's basically fruit baked in a batter and can be served warm or cold, spooned out of the dish or served in slices.  I decided to make one using some more of my gorgeous apricots.
For this clafoutis I used my new dish.  It's a Le Creuset gratin dish that I bought at a "vide maison" for 2€.  A real bargain.  A vide maison is a house sale, where people set out tables of unwanted items in the garden or courtyard, sometimes with prices on but mostly open to negotiation.
There are fewer charity shops in France than in the UK (where every town now seems to have several different ones).  In France it seems that people hang on to their old stuff and store it in the hope of selling it at a "vide grenier" or a "brocante" - the French equivalent of the car boot sale, or antique fair.  I am constantly amazed at the optimism of the sellers as they painstakingly arrange stuff on the tables that frankly I would have taken to the tip long ago!  Some of it clearly comes out year after year in the hope that eventually someone will pay a euro or two for it.  Empty perfume bottles for example.  And old shoes, still with their original boxes.  French houses obviously have plenty of storage space -  outbuildings, cellars or attics where boxes of old junk can be stored - along with empty boxes for shoes and electrical items, in the expectation that one day box and discarded item will be reunited to be put for sale at a vide grenier or a brocante. 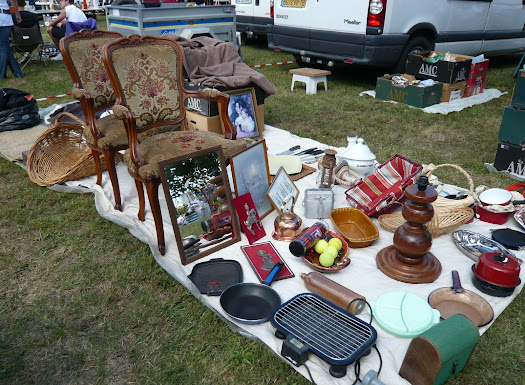 In France many villages host one or two of these events each year.  Usually the roads through the village are closed to traffic and tables are set up along the streets for people to display their unwanted stuff.  Sometimes it's on the village playing field or in the village hall.  During the pandemic last year there were virtually none.  This year there have been a few but with all the uncertainty many villages have not got around to organising anything.  Consequently  householders have been holding their own "vide maison" instead.  We came across several on our travels and spotted a small hand written notice for one at a house in our nearest village, which is where I swooped upon my bargain Le Creuset dish.
My new dish is in that classic bright orange colour that Le Creuset have been doing for years called "volcanic" - which is pretty much the same as the colour of my apricots.  It's in immaculate condition and the seller actually had three of them.  I can't for the life of me now think why I didn't buy all three, as at 2€ each I could have then given the other two to friends who also would have loved to have one.  Once again I can hear René Artois saying "you stupid wooman!". 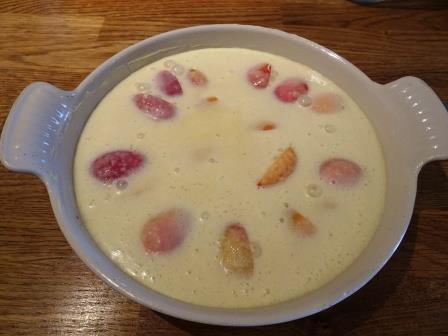 I used my favourite clafoutis recipe which you can see on Susan's blog here.  Having tried several other recipes which have all worked fine, I find I mostly come back to this one. 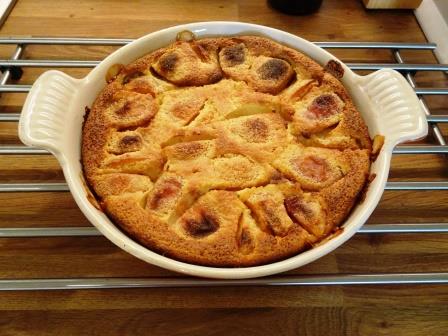 You can use virtually any fruit to make a clafoutis.  Cherries would be traditional but apricots are very good.  I have recipes for banana, prunes soaked in brandy and caramelised apple clafoutis in this blog (see the index).  You can dust it with icing sugar before serving if you like. 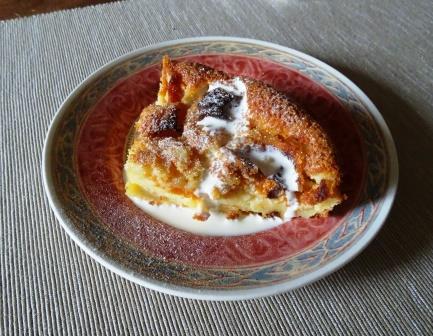 We had ours warm with cream.  Leftovers are lovely served cold or warmed through, with cream, ice cream, or even, as has been known in our UK house, custard - usually the instant variety!
Ingredients
5-7 apricots, depending on the size of your dish
50g plain flour
50g ground almonds
100g caster sugar
½ tsp vanilla extract
2 eggs
250ml plain yoghurt, buttermilk or a mixture of youghurt and whole milk
Method
Preheat the oven to 180° C / 160° fan.  Butter the dish.
Wash the fruit.  Cut each apricot in half, remove the stone then cut each half in half.  Arrange the quarters in the dish.
Put all the other ingredients into a bowl and whisk together with an electric whisk or hand blender until you have a smooth batter.
Pour the batter carefully over the fruit and bake for 30-40 minutes until firm and golden brown.
Serve warm or cool, dusted with icing sugar if you like, in slices or spoonfuls, with cream, ice cream, or just on its own.
Serves 4-6 people.