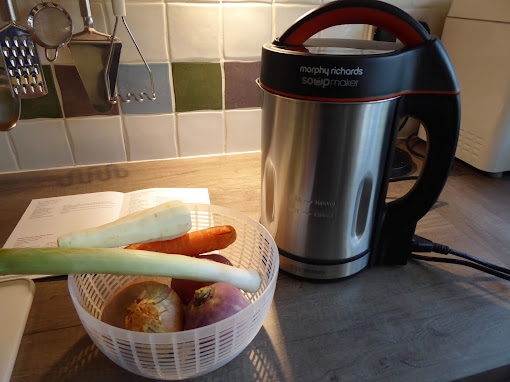 My friend Gaynor mentioned that she was having great success with a new gadget, a Morphy Richards soup maker.  Apparently she was served a delicious mushroom soup made in one by a friend (in the days when you were allowed to meet socially distanced in the garden) and was so impressed that she got herself one.  She now uses it two or three times a week.

I am very much a fan of home made soup but am not always well organised enough to make it in time to have for lunch.  (The recipe I normally use is a Nigella one which you can see here.)  When Gaynor mentioned how easy her soup maker was to use and how rapidly it made soup I was very tempted.  When she told me what a bargain they are at the moment I needed no further convincing and dashed off to buy one.  This model that you can see here is currently on offer for £40 in a chain of shops called B&M, which is even less than the special offer price of £49.99 and less than half the recommended retail price.  Bargain!! 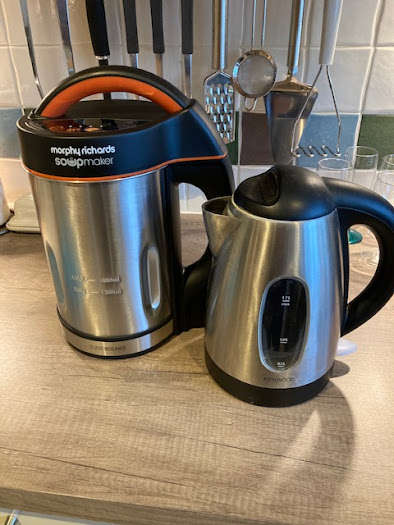 I was a bit concerned where it would live in the kitchen as worktop space is filling up with other gadgets (since I got my lovely Kenwood KMix food mixer - did I mention that already?) but it is not all that big, just a bit bigger than an average kettle.  My kettle that you see above is quite a small one. 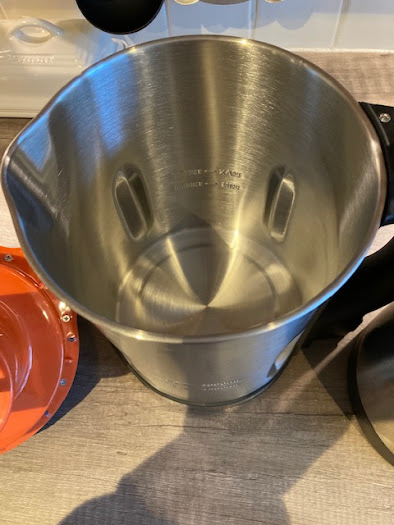 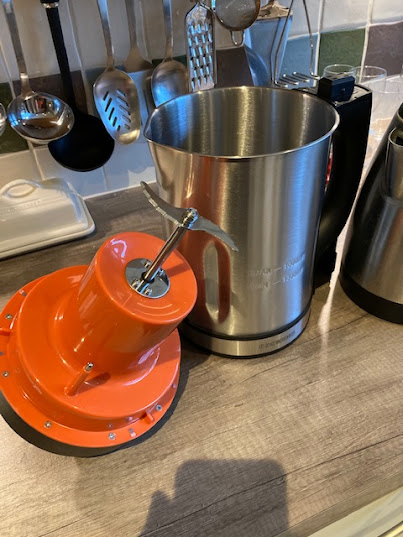 In fact the soup maker is effectively a large kettle with a hand blender inside it.  The liquid you put in the pot cooks the veg and the blender bit processes it smooth.
All you have to do is put peeled and diced veg in the pot with the right amount of water and a stock pot or cube and switch it on.  You can choose to have the soup chunky or smooth and hey presto you have home made soup about twenty minutes later with hardly any washing up.
I was a bit concerned about the washing up part as the components, all two of them, are not immersible.  In reality I found that if I rinsed the top under the tap, filled and rinsed out the pot with clean water, wiped over with a clean cloth, rinsed again and dried, it was dead easy.  Quicker than  trying to wrestle the bits of a food processor into the dishwasher in fact. 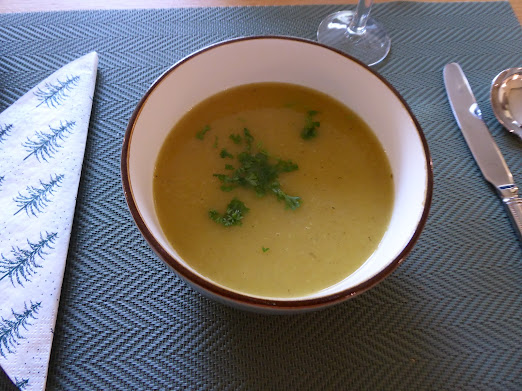 For the first use today I used the recipe in the booklet that came with it to make my usual soup.  It was delicious.  There are numerous tweaks and changes I can do to experiment with it which I look forward to immensely.  Highly recommended.
There are several soup maker recipes on the Good Food website here.