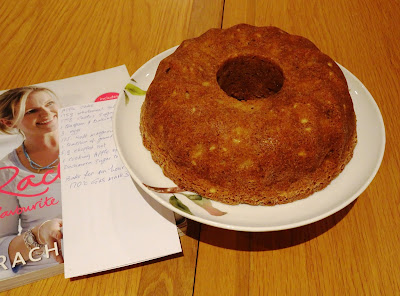 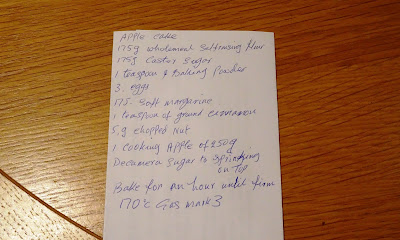 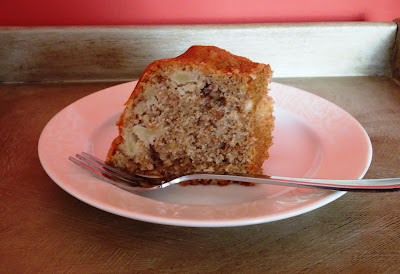 It was lovely.  With the wholemeal flour and the chopped nuts it had a distinctly nutty flavour and was quite delicious.  It wasn't overly sweet either, in fact you could almost consider it "good for you"!  The only thing I might change for next time would be to maybe increase the amount of cinnamon to make it a bit more spicy.  I could have dusted it with icing sugar or even given it a drizzle of icing but leaving it plain as it came out of the oven seemed just right for its wholesome appearance and flavour.  Definitely a cake I will be making again.
~~~~~~~~~~~~~~~~
As it turns out, I am not all that thrilled with the Rachel Allen book.  A glance through it didn't inspire me to make anything in particular so it may well end up back at the charity shop!
Ingredients
175g wholemeal self raising flour
175g golden caster sugar
1 tsp baking powder
3 eggs
175g soft margarine or butter (I used Anchor Spreadable)
1 tsp ground cinnamon
50g chopped mixed nuts
1 cooking apple of about 250g, peeled, cored and diced
1 tblsp demerara sugar
Method
Preheat the oven to 170 C / 150 fan / gas mk 3.  Butter a 2lb (900g) loaf tin, 20cm round tin or a small Bundt tin.
Cream the butter and sugar until light and fluffy.  Beat in the eggs one at a time with a little of the measured flour.
Mix the spice and baking powder with the flour and fold into the mixture.  Finally add the chopped apple and the nuts and mix well to combine.  Spoon the mixture into the tin, level the top and, if using a loaf tin or round tin, sprinkle the demerara sugar on top (omit with the Bundt tin as the top becomes the bottom).  Give the tin a few sharp taps on the worktop to settle the mixture and avoid any air bubbles.
Bake for 40 minutes to 1 hour until done.  Cool in the tin for 10 minutes then turn out onto a wire rack to cool completely.
Cuts into 10-12 slices.