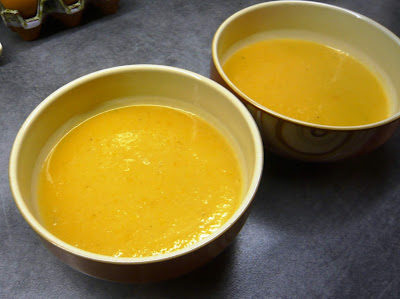 It was summer and ice cream weather here last week.  This week it's back to winter.  We had a frost overnight and it was perishing cold when walking the dog this morning.  Soup weather.  Luckily my over zealous click and collect internet shopping adventures have meant that there are always the ingredients for some kind of soup in the house.  What's more, it doesn't need any flour and not much cooking either.
The very first soup I ever made was a vegetable soup and it was probably less than ten years ago.  Which means that for the first forty of my cooking years (so excluding childhood and teenage years) I never made a soup from scratch.  I only ever opened a tin or a packet of dried soup mix.  I just assumed it would be terribly complicated and needed special equipment.  As it turns out, it's really easy and all you need is a big enough saucepan.  I bought my stock pot in a supermarket sale.  The other useful gadget is a food processor which makes short work of all the chopping.  In reality a knife would do it just as well but takes more time.
I have Nigella Lawson to thank for the idea that soup need not be fiddly and faffy to make.  In her preposterously named book "How to Eat" she has a recipe for vegetable soup that she describes as a "working model for a plain but infinitely variable soup".  The first time I made it I couldn't believe how good home made soup could taste. 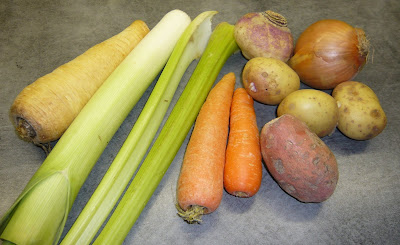 These are the basic ingredients.
I don't always use turnip as they don't often appear in UK shops, so I would use about a third of a swede instead.  In France it's the other way round.  Turnips are much more readily available whereas swede is still regarded as animal food. 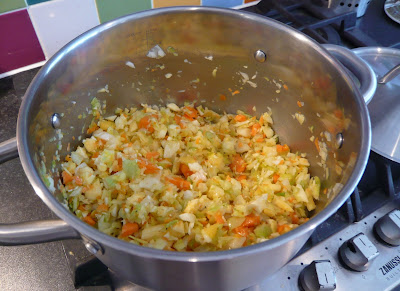 Having chopped all the veg fairly small you sweat them in a mixture of butter and oil before adding the stock and simmering for a while. 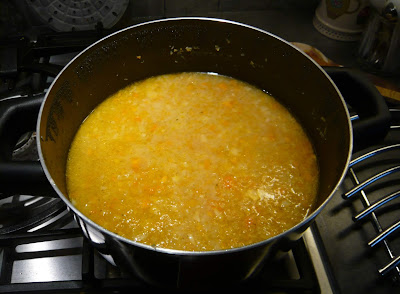 The final step is to blitz the soup in the pan using a stick blender which is less fiddly than transferring the liquid back into the food processor or blender.
The final, final step is to add a dash of what we have come to call "mystery ingredient".  A generous splash of dry sherry and a good grating of whole nutmeg.  Most of the soup I make now has some version of mystery ingredient in it.  A splash of some kind of wine enhances so many things!
(I have also lost count of the number of times I have dropped the nutmeg into the pan and had to go fishing!) 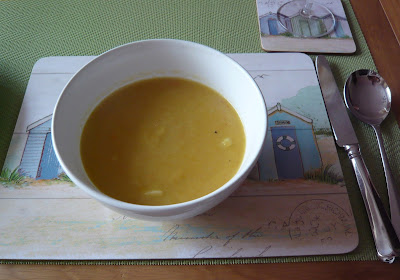 I like my soup fairly thick and with a few lumps of veg.  With or without chopped fresh herbs sprinkled on top or a swirl of cream or crème fraîche.
Ingredients
(depending on the size of the veg you have)
1-2 onions
1-2 carrots
1 maincrop potato or 2 smaller ones
1-2 stalks celery
1 large or 2 small leeks (Nigella says white part only but I use it all)
1 small sweet potato or part of (optional)
1 turnip or a chunk of swede
a large knob of butter and a good splash of olive oil (about 1 tblsp)
1 litre of vegetable stock (made with Marigold powder and boiling water)
1 bouquet garni
grated fresh nutmeg
dry sherry, small glass
fresh parsley, chives or coriander (optional)
a spoonful of cream or crème fraiche (optional)
Method
Wash and peel the veg as appropriate.  Cut into chunks and put into a food processor.  You may need two batches in which case I usually do the potatoes last.  Process until medium fine.  (Or chop everything as small as you can with a sharp knife.)
Heat the oil and butter together in a stock pot or large saucepan.  Add the veg, season with salt and cook uncovered until softened, about 10 minutes.  Shake the pan or stir occasionally to make sure they don't stick.
Add the stock, a good grind of black pepper and the bouquet garni.  Bring to the boil and simmer gently, covered for 25-35 minutes until cooked and mushy.
Remove from the heat and either transfer to the processor or a blender to blend until smooth, or use a stick blender in the pan.  I like to leave it fairly lumpy and even with a few larger lumps of veg.  If it's a bit too thick add a splash of extra stock or just water and reheat if necessary.
Before serving, stir in a good splash of dry sherry and a sprinkling of freshly grated nutmeg to taste.  Ladle into bowls and add some chopped fresh herbs and a swirl of cream or crème fraiche if you like.  It's perfectly good without.
Makes 6 servings.