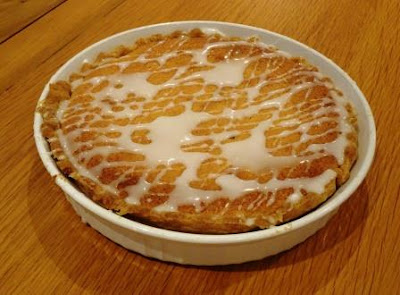 The Bakewell tart I made the other week went down so well that another one was requested. 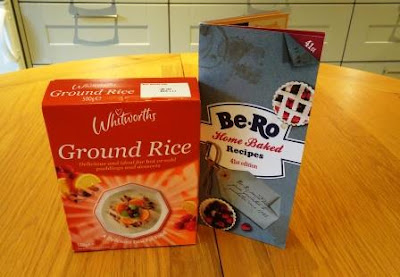 This time I decided to make the recipe in my Be-Ro book.
This recipe uses ground rice and ground almonds for the topping but no flour (except in the pastry).  It's a long time since I had any ground rice in the house and it proved hard to find.  Sainsbury's, Tesco and the Co-op didn't have any but I finally tracked some down in Morrison's.
How times change.  Ground rice pudding was a quick and easy pudding to make and a favourite of mine as a child.  Even as an adult, when I could choose for myself what I wanted to cook, it was a real treat.  Now I can't remember the last time I used any.  It's likely that the remains of a packet was thrown out in one of my house moves over the last five years and until now I hadn't missed it.  Now I have some again I can't imagine how I lived without it.  I love ground rice pudding, along with regular rice pudding and - flaked rice pudding!  Does anyone remember that?  I feel compelled to buy a packet of flaked rice as soon as I see one.  Sainsbury's used to have it but as it was next to the ground rice on the shelf...…I'm not too hopeful about ever getting any. 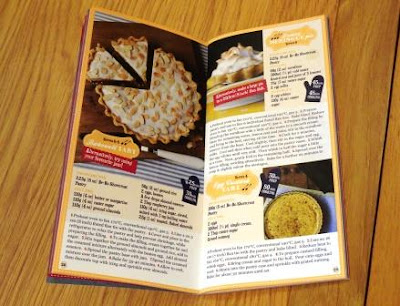 I'm pretty sure the recipe my mum used would have been the one in the Be-Ro book.  However, it has changed.  Comparing the two recent editions, the latest (41st) has more butter and sugar than the previous (40th) edition and also two eggs instead of one.  I decided to go with it and see how it turned out.
I have a very small collection of Be-Ro books and the recipe has varied quite a bit over the years.  In my battered copy of the 32nd edition (which cost 1/6d so is probably late 60's) there are only 2oz each of margarine, sugar and ground almonds, plus 1 egg and 1oz round rice, which would hardly have made enough filling to fill the tart. 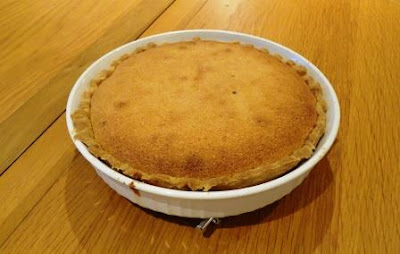 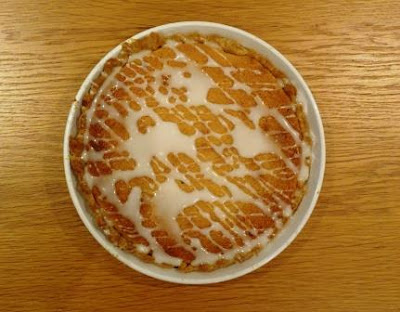 This Bakewell tart was very different to the one I made last time.
The texture was much more dense and sticky and, as you might expect, less cakey and more grainy than before.  That would be the ground rice in place of the flour.  It occurred to me that in days of yore ground rice with a drop of two of almond essence might well have been a cheaper alternative to ground almonds, which only made an occasional appearance in my mum's baking, mainly at Christmas. 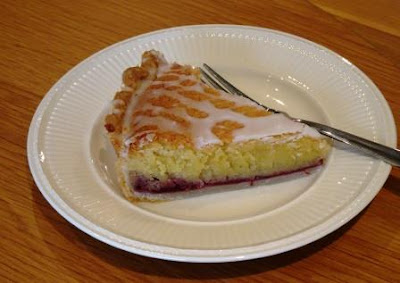 I would be hard pressed to choose which one I preferred.  I quite liked the denser stickiness of the Be-Ro recipe but felt it could have done with longer in the oven.  I used the heated baking tray trick but in the centre of the tart the pastry was definitely soggy.  Barely cooked in fact.  So much so that I'm tempted to remake it to the previous edition's recipe, with less butter, sugar and only one egg, to see if it makes a difference.  I wonder what made them decide to change the recipe again.
Ingredients
Shortcrust or sweet pastry made with about 175g flour, homemade or shop bought
For the topping
2-3 tblsp raspberry jam
4oz butter or margarine (I used Stork baking spread)
4oz caster sugar
4oz ground almonds
2oz ground rice
2 eggs, beaten
a few drops almond essence
2-3 tblsp icing sugar to decorate
Method
Preheat the oven to 190°C / 170° fan / gas mk5.  Roll out the pastry to fit a greased 20cm flan dish or tin.
Cream together the Stork and sugar.  Mix the ground rice and almonds together and beat into the mixture alternately with the eggs.  Beat in the almond essence.
Spread a generous layer of jam over the pastry and dollop on the almond mixture.  Spread out evenly and bake for 35-40 minutes.
To decorate, mix the icing sugar with enough water to make a creamy consistency and drizzle over the tart when completely cold.
Cuts into 8 slices.