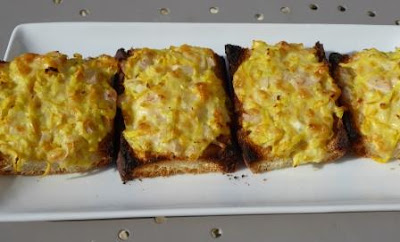 By this time of year we are usually well an truly courgetted out and running out of ideas how to eat our way through a glut of them. However, this year our courgette plants have not done so well, mainly because of the drought here in France.  We had a few yellow courgettes earlier in the summer, then the heat stopped the plants in their tracks.  The green courgette plant produced a few tiddlers then in the strong hot winds in August the top of the plant broke off and that was the end of that.

The weather has finally returned to something like normal and in fact for the whole of October we have had plenty of rain.  The grass has turned from a crozzled and desperate brown to a lush green and you could almost hear the flower beds sigh with relief as they soaked up the rain and started to grow again.  And now we are getting enormous yellow courgettes. 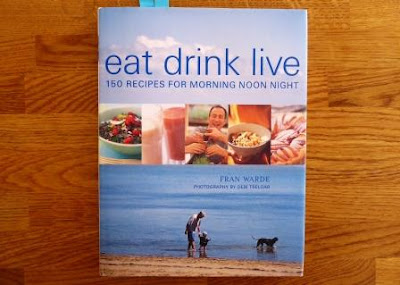 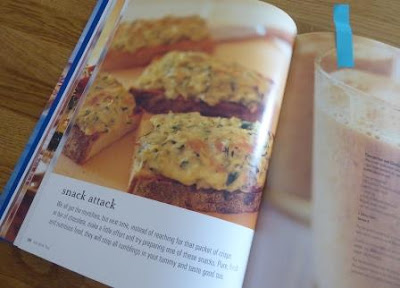 I was actually browsing my cook books for recipes using plums when I happened upon this one for courgettes.
It's in a book by a lady called Fran Warde who you may not have heard of.  She co-wrote the cookery books of French recipes along with Joanne Harris, she of the "Chocolat" novels and film.  Those cook books are worth having just for the pictures alone and I have passed many an hour poring over the pictures of sunny French markets in darkest February, when the weather outside in Derbyshire was at its most foul. 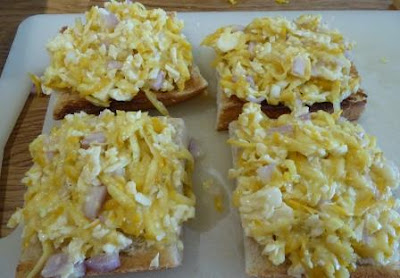 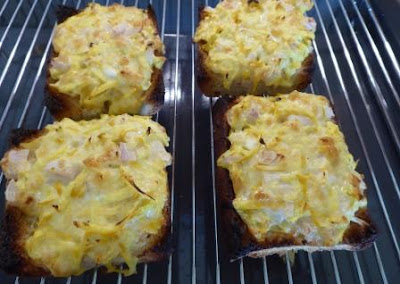 The idea of courgettes on toast did seem like a strange concept but I couldn't resist having a go.  You make a mixture of grated courgette, egg, shallot and cheddar cheese, pile it on toast and grill until golden brown.  The most similar thing I can think of would be a tartine - toast with various fillings served here in France. 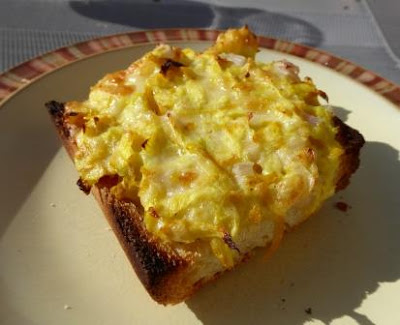 I also happened to have three quarters of a pain in the freezer - a pain is a large baguette and makes beautiful toast.  We need to use up as much of the fridge and freezer contents as possible before we go back to the UK for the winter so this recipe ticked several boxes - also using up an egg, some cheddar (which has already crossed the channel once), a stray shallot and a yellow courgette straight from the vegetable patch.
It was delicious.  Nick expressed a certain amount of scepticism but was immediately won over after the first mouthful.  We will definitely be having these again.
Ingredients.
4 chunky slices of bread
1 large courgette
1 shallot, finely chopped
1 small egg
about 50g grated cheddar cheese
a good dash of Worcestershire sauce
salt and pepper
Method
Toast the bread on both sides.
Grate the courgette and pile it into a clean tea towel.  Gather the tea towel up and squeeze as much liquid as possible out of the courgettes.
Put the courgette into a bowl with all the other ingredients and mix well.  Divide the mixture between the pieces of toast, piling it on top then pressing down slightly with a fork.
Place under a hot grill and cook until the filling is lightly browned and the cheese bubbling.  This will take about five minutes depending on the heat of your grill so keep your eye on it.
Serve immediately.
Serves two.
For more ideas on using a glut of courgettes:
Courgette and tomato gratin
Roasted courgette and three cheese quiche
Smoked salmon and haloumi stuffed courgettes
Courgette and goats cheese pots
Courgette cake
Courgette, lemon and poppy seed cake
Chocolate courgette cake