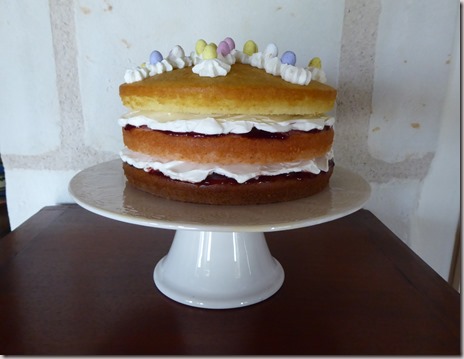 Much water has gone under the bridge and many a cake has been baked since I last posted.

The water is because the winter that has just passed must be the wettest that I remember.  There may have been even wetter ones before but I don’t remember those, only this one which has, frankly, been miserable.  My winterus horribilis (no idea if my Latin is correct, which is probably isn’t because I just made it up.)

I shall remember this winter for the muck, mud, mess and litter.  The muck comes from the renovation of our 1960’s UK bungalow, any building work seemingly impossible to achieve unless there is a ton of muck produced every single day.  The mud comes from the back garden where our new puppy Hugo churned it up and brought loads of it into the house.  The mess is the mess in the house as we moved furniture and boxes of our belongings from one room to another, upstairs and downstairs and back again (it’s a dormer bungalow) to make way for some building project or other with a deadline to meet.  The litter is everywhere in the UK as far as I can see.  And in fact as far as everyone can see.  It’s awful.

In fact the filthy state of the roads, pavements and grass verges in the UK depresses me enormously.  Who are these people who think it’s perfectly acceptable to chuck stuff onto the streets and roads?  Do they think someone else is going to pick it up or do they simply not care how awful it looks?  The situation is in such sharp contrast to how it is in our part of rural France where I am happy to say there is virtually no litter at all.  In fact if you see any litter it’s remarkable for its presence, hands are waved in horror in an ooh-la-la kind of way.  I know that there are fewer people in rural France and fewer fast food outlets, but people do eat and do buy packaged stuff.  They simply dispose of their rubbish properly, like we all should in the UK but don’t.

Anyway, rant over and back to the cake! 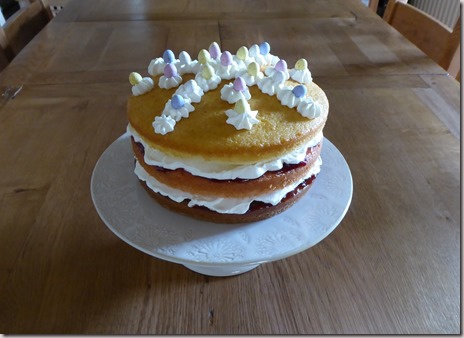 This was Nick’s cake for a recent meeting of Loire Valley Clandestine Cake Club, which I have the honour and privilege to organise.  The theme was “inspired baking”, hoping to find out what or who inspires the members to bake what they bake.  In Nick’s case the inspiration came from his mum who got him and his three sisters to take turns to bake either a cake or pudding for afters every Sunday.  With Nick’s dad being a vicar, lunch or tea was timed around the Sunday morning church service and afternoon Sunday school, hence the name for the cake. 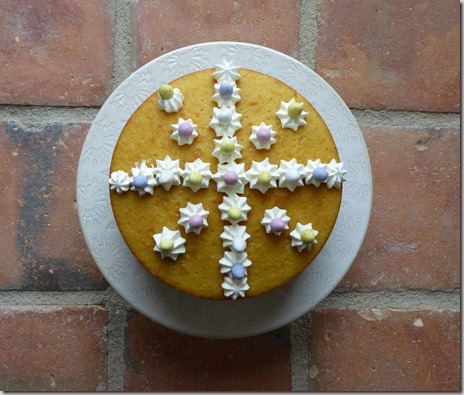 Being a boy, he was somewhat mischievous in his baking, usually creating something out of the ordinary, and his pink cakes became famous for their – pinkness.  For the meeting he baked a cake with a nod to the old mischief and produced a three layer cake flavoured with chocolate, rose and almond.  He used the all-in-one sponge recipe in my ancient (early 1970’s) Homepride Flourgraders Recipe Book (price 13/6d including postage) and added flavouring and colouring accordingly.

It was a lovely cake, one of those that almost disappeared completely at the meeting and I had to snaffle the last slice to take home so that I could taste it myself.  Which really was a tribute to the recipe, having stood the test of time and never failed.  It is written in ounces as that’s how things were weighed in the 70’s.  Because he used French flour, which doesn’t seem to produce as good a rise as our Homepride flour, Nick added a little (French) baking powder which wasn’t in the original recipe.

He sandwiched the cake layers with some Bon Maman three fruit jam and some double cream.  French cream is notoriously difficult to whisk thickly enough to do anything with it so he used some “double cream substitute”, a boxed long life product that I buy in Tesco and bring to France with me.  Shamelessly bad ex-pat behaviour I know, but a person can only take so many whipped cream disasters before all the hair is torn out and before resorting to alternative solutions.

You can read all about the meeting here. 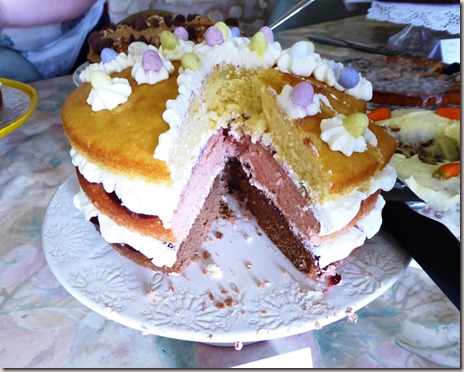 Sift the flour and baking powder into a large bowl, add the eggs, margarine and sugar and whisk with an electric whisk until well blended and creamy.

Divide the mixture into three equal parts in three bowls – as a rough guide there should be about 10 oz in each bowl.

Mix the cocoa powder to a smooth paste with the warm water and add to one of the bowls.  Add the rose water to a second along with enough colouring to produce a nice pink colour.  Add the almond essence to the third.

Whisk the contents of each bowl until the flavourings are well blended and transfer to the tins.  Bake for 25-30 minutes until done.  Cool in the tins for a few minutes before turning out onto a wire rack to cool completely.

Shortly before you are ready to serve, spread some jam on top of the chocolate sponge followed by some whipped cream.  Put the pink sponge on top and repeat the filling.  Add the almond sponge and decorate the top with some piped cream – and a few mini eggs or other decorations if you like.