You may be forgiven for thinking that no baking has been going on in our house for the last two months but this is certainly not the case!  I can’t really explain why I’ve let the blog lapse as baking is very much a part of my life and indeed very good therapy in what is turning out to be my own personal “annus horribilis”.

Anyway, I feel the blog is rested for long enough and it’s time to catch up.  I hate it when blogs just end, as if the writer died or just evaporated.  I like to know if someone has decided to give up.  No such thing here! 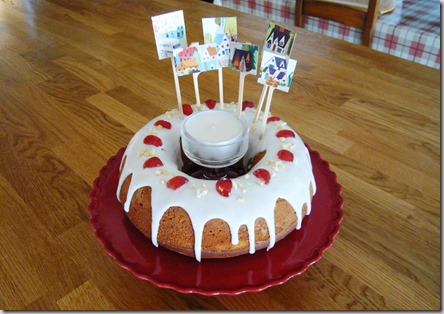 Friends of ours who lived over near Richelieu for several years have recently sold up, packed up and moved back to the UK. 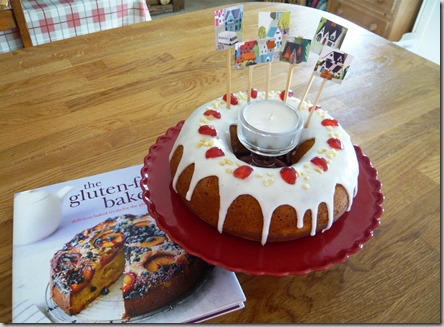 It was family ties that took our friends back to the UK and we’re very sorry to see them go.  A leaving party was arranged once the vans were all packed and the legal formalities complete.  I offered to provide the cake, which needed to be gluten free.

I used an adaptation of a recipe that I’ve used several times before, which is basically a Victoria sponge recipe from Hannah Miles’ book , “the gluten free baker”. This time I baked it in a ring tin, which makes a cake which goes a long way in a crowd and cuts easily into small, manageable slices.  Most people don’t want a huge slab of cake after they’ve filled up on other party food, but everyone is usually pleased to have a little slice to go with the speeches and toasts.  This one worked well as the crumb was not too crumbly and the slices were easy to pass around and hold in the hand. 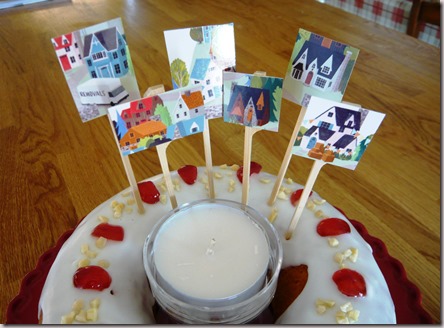 Finding something to decorate it with proved too much of a challenge in France. I couldn’t find any appropriate cake decorations as such and house warming cards do not seem to exist here, so I used one I had in stock*, cut it up and glued the pictures onto wooden sticks to decorate the cake, after icing it with simple icing and dotting a few halves of glacé cherries and bits of chopped almond on the top.  The candle holder in the middle was a 1€ bargain from a vide grenier this summer and fits perfectly in the hole in the middle of the cake.

With the appropriate decoration this large gluten free cake lends itself to any and every party or occasion.

Spoon the mixture into the prepared tin and bake for 40-50 minutes until the cake is firm and golden and passes the skewer test.  Remove from the oven, turn out and cool on a wire rack.

Make an icing using about 150g icing sugar, blended with lemon juice to the consistency of double cream.  Pour over the cake and allow to run down the sides.  Decorate as desired.

*Birthday cards and other greeting cards are incredibly expensive in France so I usually stock up on a random selection of all types of card in the UK and bring them with me.