My rhubarb envy has been partly satisfied in France by buying jars of rhubarb compote from the supermarkets there.  Once back in the UK there was the risk that I would be tempted to buy fresh rhubarb – at the silly prices charged for it. 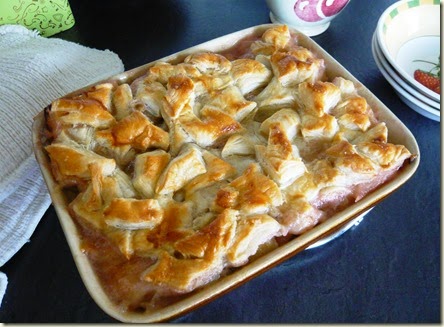 I say silly because I can’t help but remember that in my parents’ garden we grew tons of it, supplying the neighbours with free rhubarb from the two huge patches at the top of the garden by the greenhouse, every year.  Tons of it, and it cost nothing to grow it.

How I miss those rhubarb patches and I do love rhubarb.  So it was inevitable that I would be unable to resist the temptation to buy some once we were back in the UK.  I wondered how much you would need for a decent pie or crumble and so picked up four sticks.  When I got them home and looked at the supermarket receipt I discovered I have paid £2.05.  The equivalent of ten shillings a stick!

My mother and grandmother would turn in their graves if they knew!

Four sticks, even at ten shillings each, is not enough for a pie or crumble.  So I added two sliced apples and, using a box of pastry trimmings I keep in the freezer, I made a rhubarb and apple jumble pie.

The idea for a “jumble pie” comes from a recipe in the Hairy Bikers book “Perfect Pies”.  The idea is that every time you make something out of pastry, instead of throwing the trimmings in the bin, store them in a box in the freezer and use them for a virtually instant pie topping.  Great idea.  The dog is not impressed though – she used to get them baked into dog treats, poor thing. 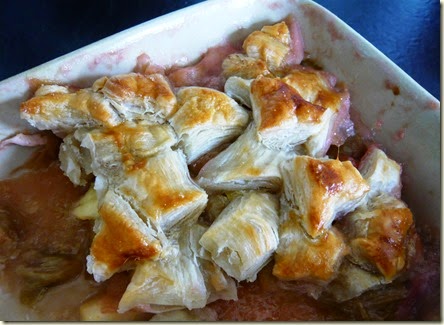 My box of pastry trimmings contained a mixture of allsorts, sweet pastry, plain pastry and puff pastry bits. But it worked really well, as always.

4 sticks of rhubarb, washed, trimmed and cut into 2” chunks

a boxful of pastry trimmings from the freezer*

Cook the rhubarb with a splash of water in a saucepan over gentle heat until tender but not mushy.  Pour into the bottom of a greased baking dish, size depending on how much fruit you have.

Slice the apples on top of the rhubarb and sprinkle with the sugar.  Scatter the pastry bits over the top and brush with beaten egg.  Sprinkle with a little more sugar if you like.

*you could of course buy a pack of ready made, ready rolled pastry and cut it into random shapes to achieve the same effect.